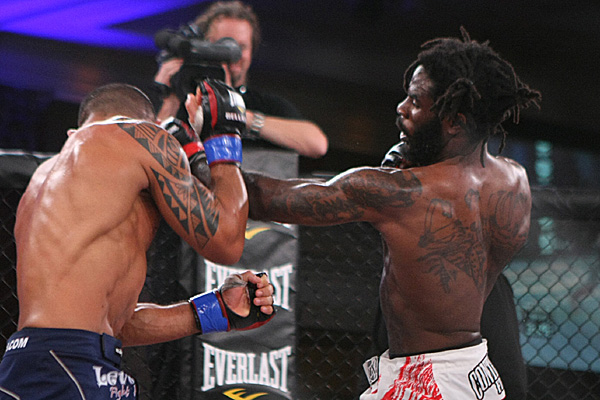 There are no more hurdles for Daniel Straus to clear in the Bellator Fighting Championships Season 6 featherweight tournament.

The relentless Straus outworked former Sengoku champion Marlon Sandro in capturing a unanimous decision in the tournament final at Bellator 68 on Friday at Caesars Hotel and Casino in Atlantic City, N.J. All three cageside judges sided with Straus (20-4, 6-1 Bellator): 29-28, 30-27 and 30-27. The 27-year-old Cincinnati native has won 16 times in his past 17 appearances.

Victimized by an incidental but nevertheless savage low blow inside the first minute of the fight, Sandro (22-4, 5-2 Bellator) never got in gear, as the vicious one-punch power for which he has become known was nowhere to be found.

Straus controlled the Brazilian jiu-jitsu black belt in the clinch and put him on the defensive with a consistent right jab and steady diet of straight left hands. He also scored with takedowns in the first and third rounds. Perhaps sensing Straus already had two rounds in the bank, Sandro threatened with a standing arm-triangle choke midway through the final frame. Straus calmly freed himself and proceeded to erase much of the Nova Uniao representative’s good work in the closing seconds, when he delivered a powerful slam, moved to his back with hooks in and fished for a rear-naked choke until the horn sounded.

“I’m going to keep improving,” said Straus, who will next face either Pat Curran or Patricio Freire for the Bellator featherweight championship. “I have got to get better. That wasn’t the best fight in the world.” 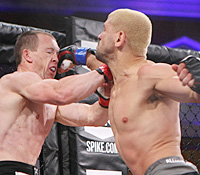 Galvao was the busier man for much of the encounter, forcing his opponent backward with heavy inside leg kicks, power punches and close-quarters knees. More importantly, he shut down all but one of Marx’s takedown attempts, frustrating the three-time state high school wrestling champion. Marx (19-3-1, 1-1 Bellator) made his move in round two, as he did some nice work in the clinch and tagged the Nova Uniao export with lead left hands. However, his momentum was short-lived, as Galvao bounced back and righted himself over the final five minutes.

The 30-year-old Galvao will tackle the winner of the forthcoming Hiroshi Nakamura-Luis Alberto Nogueira matchup for the Season 6 tournament championship. 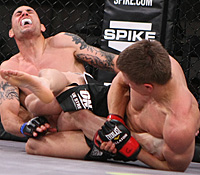 K. Mills
Held tapped out Kennington.
Polish prodigy Marcin Held submitted Derrick Kennington with a first-round heel hook in a lightweight showcase. Kennington (6-3, 0-1 Bellator) succumbed to the hold 2:08 into round one, his promotional debut spoiled.

Kennington delivered the first significant offense of the fight less than 30 seconds after it began, as he dropped the 20-year-old Pole with a short right hand. Held (13-2, 2-1 Bellator) recovered and forced his opponent out of his guard and back to his feet with an omaplata attempt. Then, Held did what he does best. He crashed hard for a takedown, pulled guard and latched onto Kennington’s leg. Before he knew it, Kennington wanted out. 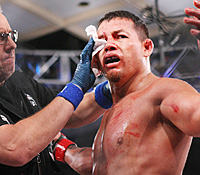 K. Mills
A cut ended Spiritwolf's night.
Dream welterweight champion Marius Zaromskis stopped well-traveled journeyman Waachiim Spiritwolf on a vertical cut between the bridge of his nose and his right eyebrow two rounds into their featured matchup. The cageside physician advised referee Dan Miragliotta to halt the bout while the fighters were on their stools between the second and third rounds.

Spiritwolf (9-9-1 [1 NC], 1-1 Bellator), who failed to make weight for the match, employed a clinch-heavy attack early. Zaromskis opened a first cut with an unorthodox inverted standing elbow in the first round. In the second, Spiritwolf had the Lithuanian in serious trouble, as he cracked him with a vicious right uppercut that had him stumbling away from contact. More blows drove Zaromskis to the ground, where he recovered in full guard and started firing elbows from the bottom, one of which seemed to open the fight-ending cut.

Moments later, the doctor brought the fight to an anti-climactic close.

“I ain’t done fighting,” a visibly agitated Spiritwolf said. “I want to throw down. I want to get down.” 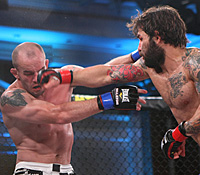 K. Mills
Carlo-Clauss bested Kirwan.
Strikeforce veteran Don Carlo-Clauss recorded his second consecutive victory, as he took a split decision from Jacob Kirwan in a hotly contested undercard bout at 155 pounds. All three judges scored it 29-28, two of them for Carlo-Clauss (9-6, 1-0 Bellator).

Carlo-Clauss was the aggressor for much of the match. The Team Bombsquad member sprawled effectively, delivered some healthy leg kicks, landed in combination with his punches and largely dodged the counter-heavy attack from his foe. Kirwan (9-5, 1-2 Bellator) did his best work in round two, as he took Carlo-Clauss’ back when he lost his balance on an attempted takedown. 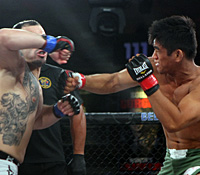 K. Mills
La Nsang shocked Martinez.
Bellator rookie Aung La Nsang made the most of his platform, as he stopped Jesus Martinez on first-round punches in a preliminary catchweight tilt. Martinez (6-3, 0-2 Bellator) met his end less than a minute into round one -- 36 seconds to be exact.

Martinez floored his adversary with a looping right hand at the start of the fight, only to watch him rise to his feet with a renewed sense of urgency and purpose. Nsang (10-7, 1-0 Bellator) leveled the 32-year-old Philadelphian with a punch of his own, trailed him to the mat and finished it there with follow-up ground strikes. 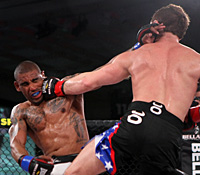 K. Mills
Leone outpointed Ledesma.
Strikeforce and World Extreme Cagefighting veteran Anthony Leone posted his third win in four appearances, as he captured a split verdict from Claudio Ledesma in an undercard duel at 135 pounds. Two of the three cageside judges scored it a clean sweep for Leone (11-5, 1-2 Bellator) by identical 30-27 counts; a third cast a dissenting 29-28 vote in favor of Ledesma (6-3, 1-1 Bellator).

A Team Bombsquad representative, Leone spent much of the 15-minute encounter stifling his foe in the clinch. In the second round, he moved into top position when an overzealous Ledesma took his back from too high a position and slid off. From there, Leone worked in open guard and later threatened with an arm-triangle choke. He punctuated his victory in round three, as he struck for a takedown and stayed active with his ground-and-pound. 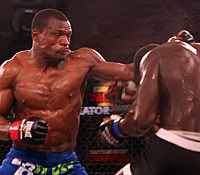 K. Mills
Ambang edged Milliard.
Low kicks, an occasional flurry of punches and airtight takedown defense carried Francois Ambang to a split decision over Aruban import Gregory Milliard in a preliminary middleweight matchup. All three judges scored it 29-28, two of them in favor of Ambang (2-3, 1-0 Bellator).

Outside of the Ambang leg attacks, there was very little offense of note from either man. Milliard (2-3, 1-1 Bellator) has lost three of his last four fights.