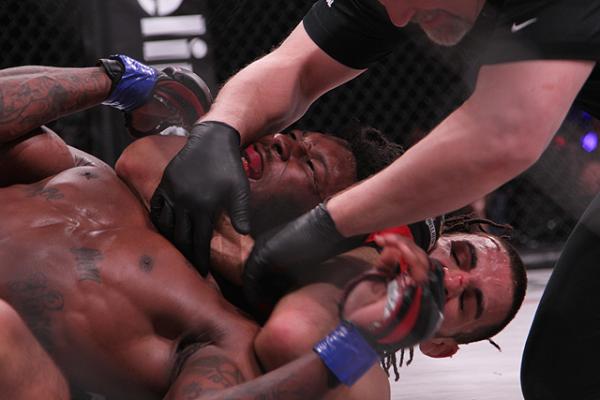 
It all came together for Daniel Weichel.

After a relatively even opening frame, Weichel (34-8, 3-0 Bellator) went about the business of dismantling his opponent. The German submission specialist wobbled Green with right hands, sprawled out of a desperate takedown attempt and moved to the Team Bombsquad standout’s back. From there, he secured his hooks, cinched the choke and elicited the tapout.

In victory, Weichel secured a shot at the Bellator featherweight crown currently held by Pat Curran.


Onetime King of the Cage and Tachi Palace Fights titleholder John Alessio utilized takedowns, a shutdown top game and elbow-laden ground-and-pound in capturing a unanimous decision from Eric Wisely in a featured pairing at a 160-pound catchweight. All three cageside judges scored it 30-27 for Alessio (35-17, 1-1 Bellator), who had not recorded a victory since March 2012.

Undersized and outgunned, Wisely (22-9, 1-1 Bellator) spent the majority of his time either on his back or retreating from his Canadian counterpart in the standup. Alessio was most effective in the first and third rounds, where he grounded the Team Conquest export and grinded away with elbows, forearms, shoulder strikes and punches.

Anderson (16-3-1, 0-2 Bellator) was a non-factor outside of a short right hand that briefly staggered the Lithuanian striker in the first round. Zaromskis, meanwhile, floored the Canadian with a right hook to the liver and peppered him throughout with punches from the perimeter, often tipping his spear with a searing straight left. The American Kickboxing Academy representative turned to leg kicks over the final 10 minutes, limiting Anderson’s mobility by attacking his lead leg with repeated shin-to-thigh contact.

The win snapped a two-fight losing streak for Zaromskis.


Alliance MMA’s Raphael Butler and journeyman Nick Rossborough fought to a split draw in a forgettable, foul-marred heavyweight match. Two of the three cageside judges scored it 28-28, with Patrick Buckley siding with Butler by a 28-27 score.

Rossborough (23-18-1, 0-0-1 Bellator) had his chances. The well-traveled Strikeforce alum had the undefeated Butler reeling with a left hook in the first round. Rossborough pounced on the former Golden Gloves champion, transitioned to his back and fished for a rear-naked choke. In what can only be described as an act of sheer desperation, Butler (8-0-1, 3-0-1 Bellator) threw an intentional backward head butt that resulted in a point deduction. However, referee Graham Bettes inexplicably restarted the heavyweights on the feet, negating the advantageous position Rossborough had worked to achieve. Butler then survived one last flurry from “Leatherface” and forced the fight into a second frame.

Rossborough had nothing left in the tank for rounds two and three, as Butler scored with takedowns and smothered him with a stifling top game.