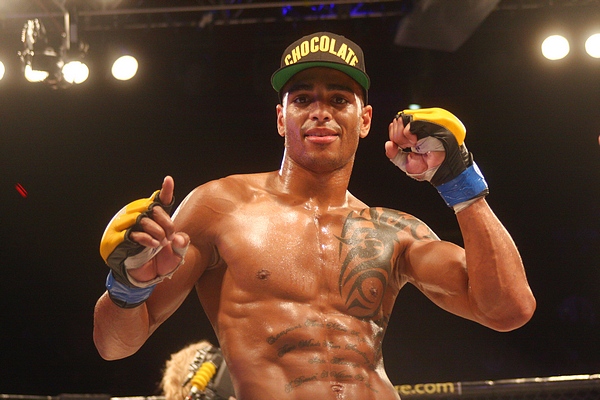 
Danny Roberts lived up to his nickname in the Cage Warriors Fighting Championship 68 headliner, as “Hot Chocolate” burned Jim Wallhead to the delight of a partisan crowd at the Echo Arena in Liverpool, England.

Though he would eventually succumb to Roberts’ considerable punching power late in round one, Wallhead managed to dip under a hard right from the Liverpool native and slam him to the mat in the early going. “Judo Jim” seamlessly passed to mount, and he held that dominant position for several minutes as his opponent fought to shrimp away.

Wallhead even managed to take Roberts’ back, though it was from this position that the prospect mounted an escape, rolling away from the Bellator veteran and regaining his vertical base. Though Wallhead again managed to plant Roberts on the canvas, the striker popped up much more quickly the second time around and made the veteran pay, flooring him with a right hook to the temple and then rendering him unconscious with several violent hammer fists.

“I was never convinced I would have an easy time. He’s a top fighter, and he’s really well-rounded. I knew there would be difficulties. I wanted to be the first person to stop him, and I’ve done it tonight,” Roberts said. “I relish these big moments. Any sort of challenge I get, I rise to it. Jimmy is a tough opponent, and I managed to come through.”

Marcelo Costa may have missed weight on Friday, but he certainly hit his mark in Saturday’s co-main event, tapping out Bellator veteran Ronnie Mann with a second-round rear-naked choke.

Despite the result, Mann was the fighter who took control of the first round, popping his Brazilian-born foe with a series of shotgun rights and lefts. Costa weathered the offense, however, and secured a takedown late in the frame.

The Cage Warriors debutant repeated that trick midway through the second stanza, and this time, he had plenty of time with which to work. Costa thwarted a sweep attempt and then used a Mann triangle choke setup to pass the Brit’s guard and take his back, flattening out Mann and sliding his elbow under the chin to force the tap.

Just prior, Mauro Chimento Jr. destroyed Matt Inman in their welterweight affair, taking the Englishman to the mat and threatening with an arm-triangle choke early in round one. Though Inman was able to escape to his feet, the Brazilian put him right back on the canvas, this time with a pair of vicious hooks to the body, bringing a swift end to the contest in just 82 seconds.

UFC veteran Che Mills snapped a two-fight skid in his 185-pound confrontation with Leeroy Barnes, punishing his countryman from the Thai clinch before cutting him wide open with an elbow on the mat. “Beautiful” sealed the deal with a crisp punch combination and then took his dazed opponent’s back, tapping his bloody foe with a rear-naked choke.

At middleweight, Matt Hallam definitively outstruck Steven Dinsdale, making particularly effective use of a Brazilian kick before felling his foe with a pair of sharp right hands in the second round.

Dean Garnett collected a slick submission victory over John Cullen in their 139-pound catch-weight contest, bullying his opponent to the mat and then falling back into a fight-ending heel hook late in the first frame.

At bantamweight, Paddy Pimblett snatched a scintillating submission win over Conrad Hayes, securing a flying triangle choke from the clinch and then forcing the eight-fight pro to tap out to an armbar from the triangle position.

Earlier, lightweight prospect Dez Parker earned an exciting, come-from-behind victory over seven-fight pro Charlie Watts, rebounding from an early knockdown to return the favor and finish “The Ox” with ground-and-pound in the waning moments of round one.