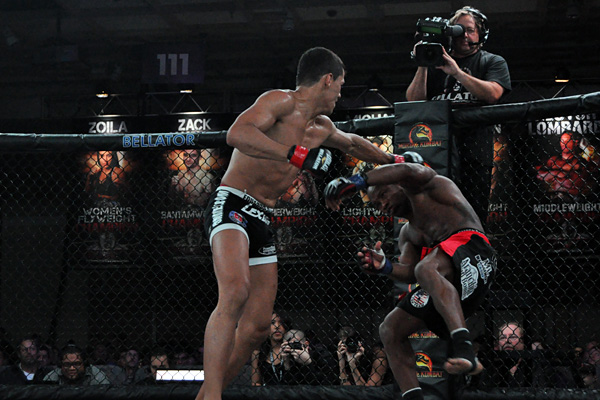 It took Dantas a round to find his rhythm, as Vila (11-1, 2-1 BFC) delivered a pair of takedowns and grinded him against the cage in the clinch for much of the first five minutes.

Undeterred, Dantas roared out of his corner in the second round, as he attacked Vila with a variety of strikes, from counter right hands to leg kicks and flying knees. The 22-year-old Nova Uniao standout also threatened Vila with a standing guillotine choke and, more importantly, kept the fight standing, allowing his most glaring advantages to take hold.

Dantas was even more impressive in round three, as he scrambled into back mount, locked the 40-year-old Cuban export in a body triangle and spent most of the second half of the frame fishing for the rear-naked choke. The submission never materialized, but the round provided a fitting exclamation point for the Dantas victory.

Dantas will carry a six-fight winning streak into his five-round showdown with Makovsky sometime in early 2012. The 29-year-old champion has not lost since August 2009.

“I think it’s going to be the toughest fight of my career,” Makovsky said. “He’s the most well-rounded guy and dangerous from every position. It will be an honor to fight him.”

Thiago Santos hovered casually above the grounded Eric Prindle and punted him between the legs, ending their Season 5 heavyweight tournament final 1:24 into round one. Ruled accidental, the blow resulted in a no contest.

Santos (10-1, 1 NC, 2-0 BFC, 1 NC) dominated the matchup while it lasted, as he grounded Prindle with ease and attacked him with heavy, clubbing blows from inside guard. Unable to stay on his feet, Prindle (9-1, 1 NC, 3-0 BFC, 1 NC) had no outlet for his brutal punching power. However, the illegal kick to the groin made all matters moot. The two men will face one another in a rematch in early 2012, the winner earning a six-figure paycheck and a shot at reigning Bellator heavyweight champion Cole Konrad. 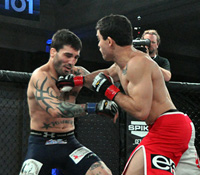 Bellator Season 4 lightweight tournament finalist Patricky Freire put away UFC veteran Kurt Pellegrino with first-round punches in a featured matchup at 155 pounds. It was over 50 short seconds after it began.

Freire (10-2, 3-1 BFC) wasted no time introducing his powerful hands to another opponent. He floored Pellegrino with a left hook-straight right combination and swarmed as the New Jersey native dove for a single-leg takedown in desperation. Pellegrino could not finish the takedown and instead found himself trapped beneath the Brazilian, eating left hands and hammerfists.

Despite the fact the Pellegrino was conscious and competing, referee Kevin McDonald decided it was time to intervene.

“Fortunately, I got a quick finish and a knockout,” Freire said. “I want to thank Kurt for taking this fight. He’s a great fighter.”

“I lost fair and square,” he said. “This is the last time you’ll ever see me fight again.” 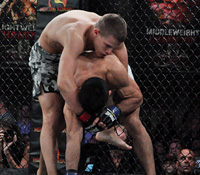 C. McGuigan
Held slipped by Nover.
Carried by an unorthodox but effective ground attack, Polish prodigy Marcin Held captured a split decision from “The Ultimate Fighter” Season 8 finalist Phillipe Nover in a lightweight showcase. All three cageside judges scored it 29-28, two of them for the 19-year-old Held (12-2, 1-1 BFC).

Held, who weathered an encounter with a beautiful counter right hook from his foe, was aggressive from the start, as he threatened Nover with an inverted heel hook and a kneebar in round one. Neither was successful, but the overt aggression seemed to catch the American off guard.

Nover bounced back in the second round, where he established his superiority on the feet, moved into top position on the mat and uncorked some clean ground-and-pound, including some short elbows and a thudding left hand that bounced Held’s head off the canvas.

Nover (5-4-1, 0-1 BFC) had difficulty getting his offense in gear in the final frame. Held met him with an immediate takedown and worked briefly from half guard. Nover later scored with a takedown of his own and let go with more ground-and-pound, but his efforts went for naught. Held, long viewed as one of Europe’s most promising fighters, has rattled off four victories in five appearances. 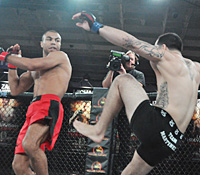 The two men clinched early, until Martinez hit the floor after a leg kick from Amoussou and a subsequent slip. The 31-year-old old returned to his feet but only briefly. There, Martinez (6-2, 0-1 BFC) was met with a head kick and well-placed right hand to the chin that crumpled him where he stood. Amoussou, a 26-year-old Haute Tension representative, pounced on his wounded foe, unleashed punches and forced the stoppage.