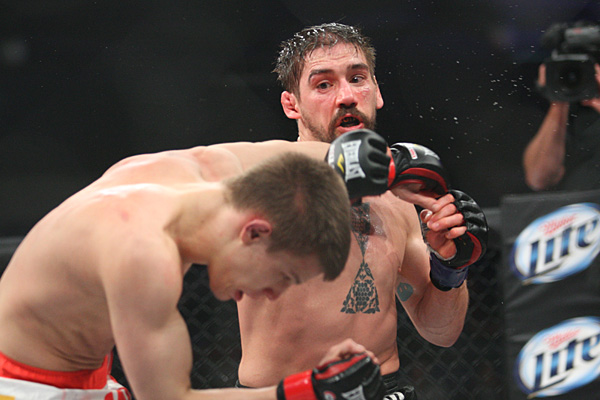 Superb submission defense and opportunistic ground-and-pound spurred Jansen to a unanimous verdict over Marcin Held in the Bellator MMA Season 7 lightweight tournament final at Bellator 93 on Thursday at the Androscoggin Bank Colisee in Lewiston, Maine. All three cageside judges struck the same decision: 29-28 for Jansen (19-2, 6-0 Bellator), who secured a $100,000 payday and with it a shot at unbeaten 155-pound champion Michael Chandler.

The 33-year-old Sports Lab representative turned the tide in his favor in the second round, where he mounted Held and made the Polish grappling wiz pay for his repeated leg lock attempts. Jansen met his advances with punches, elbows and hammerfists, all while maintaining top position. By the time round three arrived, Held (15-3, 4-2 Bellator) was spent. Jansen popped him with leg kicks and punching combinations, forcing the weary 21-year-old to pull guard in desperation.

Held again turned to his trusted submission, first fishing for an inverted heel hook and later for an ankle lock. Neither was successful, and Jansen resumed his assault from the top. Photo: K. Mills/Sherdog.com
Martinez teed off on Wiuff.
Ryan Martinez posted his seventh win in eight outings, as he stopped the well-traveled Travis Wiuff on first-round punches in a featured heavyweight matchup. Wiuff (68-17, 4-2 Bellator) met his end 18 seconds into round one.

Martinez (9-2, 2-1 Bellator) floored the hulking Minnesotan with a powerful combination punctuated by a clean left hook and sealed the deal with a series of standing-to-ground right hands. Photo: K. Mills/Sherdog.com
Davis vs. Spiritwolf ended prematurely.
An inadvertent below-the-belt knee strike from Ultimate Fighting Championship veteran Marcus Davis resulted in a no contest with Waachim Spiritwolf in a welterweight showcase. The blow brought an anti-climactic conclusion to their bout in the first round.

Neither man established a foothold in the match, as they spent much of their time posturing and pawing at one another. Davis (21-9, 0-0 Bellator) sprawled on a Spiritwolf takedown attempt, fished for a standing guillotine choke and reversed position against the cage.

With Spiritwolf (9-11-1, 1-2 Bellator) in a crouch, Davis fired an errant knee to the groin, leaving his 37-year-old foe unable to continue.