But that achievement isn’t enough as the Brooklyn native has declared that he wants to become the first MMA fighter in a major promotion to simultaneously possess world titles in two weight classes since Dan Henderson accomplished the feat. His foray into the light heavyweight division has been splendid thus far as he submitted Jesse McElligott at World Series of Fighting 20 in the second round to inch closer to that dream.

Branch dominated McElligott from the start and it was a matter of time before he closed the show in emphatic fashion. Branch, who is a Renzo Gracie disciple, scored a powerful takedown in the first and controlled the position with pressure and strikes. But when he rocked McElligott with a knee in the second, he teed off on his woozy foe until he took him down again. Branch worked quickly as he trapped the Massachusetts fighter’s left arm and secured a slick Von Flue choke. Within seconds, McElligott was unconscious, prompting veteran referee Dan Mirgliotta to peel him off, ending the fight.

The capacity crowd inside the Foxwoods resort in Mashantucket, Conn., roared with approval as Branch took one step closer to fighting for the WSOF light heavyweight crown. McElligott (5-2), who was a late replacement for Ronny Markes on just two days’ notice, was never really in the fight but he was game. However, Branch, now 16-3, was on a mission and he achieved it just 1:28 into the second round; his next bout is penciled into be for the 205 crown.


Newell Bounces Back with Win 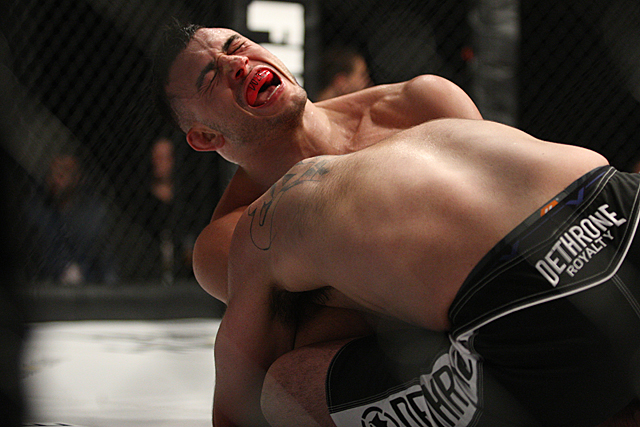 (+ Enlarge) | Photo: K. Mills/Sherdog.com
Newell was forced to the scorecards
for the second time in his career.
Lightweight contender Nick Newell had to dig deep to hang on and defeat Joe Condon, which he did via unanimous decision in the co-main event of WSOF 20.

Newell had great success in the first two rounds with sporadic kicks to the body and scattered takedowns. “Notorious” Nick also utilized a strong submission attack, though the Jersey City fighter was able to thwart every attempt. Newell was in control of the action for the majority of the duel, but his gas tank was drained late in the fight, leaving a small window of opportunity for Condon to capitalize.

Condon closed the gap and scored a takedown of his own, where he peppered his foe with dozens of strikes on the ground, but Newell was able to block most of the attacks. With both men going for broke but exhausted with time expiring, Newell nearly ended the battle with a superb guillotine attempt. However, the Connecticut fighter ran out of time and had to settle for a decision, which he won via 29-28 on all three official scorecards.

The win improved Newell to 12-1 overall; Condon, from Victorville, Calif., dipped to 11-8. 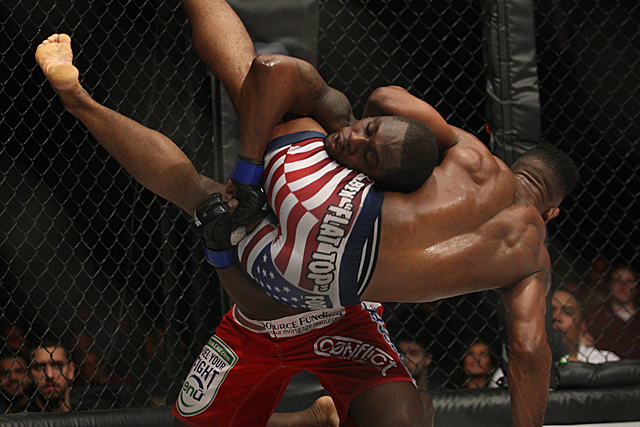 (+ Enlarge) | Photo: K. Mills/Sherdog.com
Walo's wrestling made Fodor look
nothing like a superhero.
After making a name for himself by grabbing national headlines as a part-time crime fighter in Seattle, “Phoenix Jones” Ben Fodor was set to make a triumphant WSOF debut. His opponent Emmanuel Walo got in his face at the weigh-ins and promised to end Fodor’s unbeaten streak and after three grueling rounds of action in a 175-pound catch weight battle, Walo was correct.

The Jersey City, N.J., fighter scored monstrous takedowns seemingly at will and although he didn’t inflict any serious damage while Jones was on his back, his decagon control was the key.

Phoenix wanted badly to keep the fight standing, but Walo was intelligent enough to continuously take his foe to the ground. In the end, Walo was busy enough to win a unanimous decision via tallies of 29-28 on all three cageside judges’ scorecards, improving to 8-2-1 in the process. Fodor fought well in his WSOF debut, but the loss leaves him at 5-1. 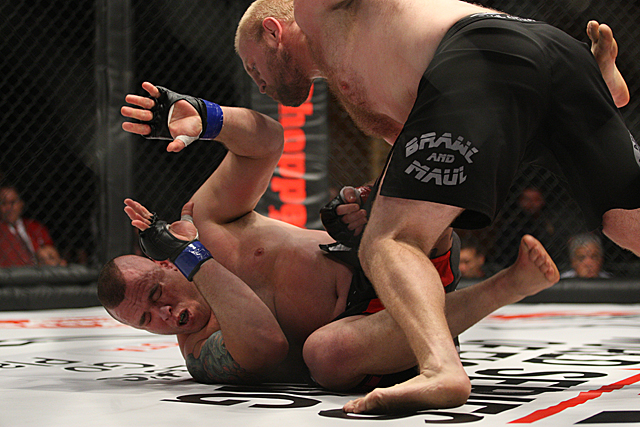 After a rather cautious first half of the opening round, Mocco began to open up his offense until he hurt his foe with a right hand. From there, Coutinho didn’t seem too eager to trade with his opponent and shot in for a single leg. He missed the shot and stumbled onto the seat of his trunks; Mocco quickly put him on his back. That was all “Bear” as he ended the battle moments later. Struggling to explode back to his feet, Coutinho had to cover up from the incoming assault from the American Top Team fighter.

Once “Banana” rolled over and turtled up, Mocco never gave him an inch to escape and pounded him with an assortment of punches until veteran third man Dan Mirgliotta jumped in and stopped the contest at 4:02 of the opening round. 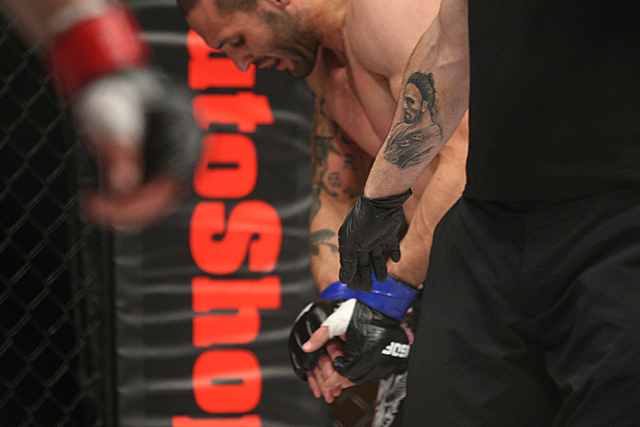 
Renzo Gracie pupil Ozzy Dugulubgov was awarded a first round TKO victory over Lucas Montoya in the first televised bout of World Series of Fighting 20.

Just as the action was heating up, Dugulubgov landed a thudding kick that was partially blocked. The strike wound up breaking the Blackout MMA fighter’s arm, prompting the bout to be halted official at 3:39 of the first.