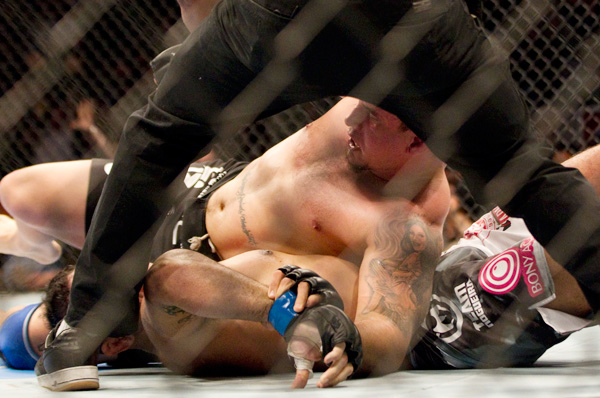 Frank Mir had locked up a deep kimura during their bout Saturday at UFC 140, but Nogueira would not submit. Mir kept cranking, and Nogueira’s arm began to climb up his own back.


Advertisement
“In my mind, I was hoping that he would tap,” Dean told the Sherdog Radio Network’s “It’s Time!” show with Bruce Buffer. “Like, ‘Please, please make this easy for me. That looks like it’s on.’ I definitely [had a] heightened awareness at that time. I was really focused on that arm. But that’s how Antonio became who he is -- he didn’t get there by giving up. That guy’s done things that everyone thought was impossible time and time again because he never gives up.”

Technically Nogueira did tap, but that was after his humerus had already snapped.

It can be a tough situation for a referee when a fighter’s caught in a submission like Nogueira was. Dean explained that with professionals, it’s not his job to intervene when he thinks something could break. In amateur fights, though, the game is a little different.

“In amateurs we talk about stopping it before, and I’m not even sure how I feel about that exactly,” he said. “In amateurs we do stop them a little bit before we believe it’s totally locked out. At the end of the day, I don’t know when it’s going to break. I don’t know what that guy can take. So for a professional fight, that’s part of being a professional fighter is knowing how to look after yourself and knowing what you can and can’t take and knowing when it’s time to tap.”

Sometimes fighters submit too late, though. Dean has seen his share of injuries, and not everyone handles it like Nogueira did. He was in the cage once with a fighter who kept screaming in agony after having his arm dislocated, but Nogueira did the opposite.

“He was very calm,” Dean said. “He’s an exceptional person. Even during that, with coordinating with the physicians and him getting out of there, at some point he started taking an active role. ‘OK, Herb, I want you to help me up.’ He was pretty calm through it.”