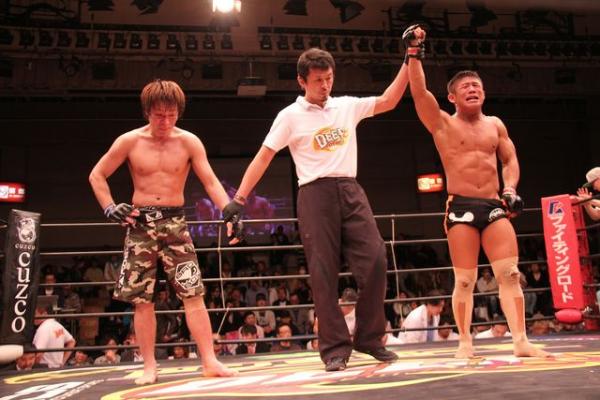 
Japanese promotion Deep pulled out all the stops for “66 Impact” on Tuesday night, stacking the card with title fights in five different weight classes from 135 to 205 pounds.

In round one, Kitaoka scored an early takedown and ended up in side control in the corner of the ring. Miyazaki worked his way to his feet but it proved only a temporary reprieve as the champion put him on his back again immediately, where he remained until the final seconds of the round.

The second stanza followed a similar pattern, but this time it was Miyazaki who initiated the grappling, jumping guard to attempt a guillotine choke which Kitaoka easily slipped out of. Late in the round, the champion dropped for a double-leg takedown, which he landed, but not before taking a series of hard elbows to the ear.

Kitaoka secured another early takedown in the final frame and remained in side control until midway through the round, when the fighters were stood up by Kenichi Serizawa. Miyazaki responded by flinging the champion to the ground but was unable to mount any offense from Kitaoka’s guard.

With the clock ticking down, the southpaws engaged in the first striking exchange of the bout, but Miyazaki could not do enough to turn things around. Kitaoka earned a unanimous decision, with all five judges seeing the bout in his favor.

The loss snapped a seven-fight winning streak for Miyazaki, whose record fell to 10-3-3 after tasting defeat for the first time since 2011, while Kitaoka improved to 33-13-9.

Kazunori Yokota was looking to extend his seven-fight winning streak and defend his Deep featherweight belt against Katsunori Tsuda, but it was the challenger who got off to a fast start. Tsuda wobbled the champion with some fast punches in round one before the fight was paused due to two consecutive low blows.

Yokota responded with an overhand right which connected clean and some hard knees from the clinch. There was less striking in the second round as the champion was able to secure a pair of takedowns, although on both occasions the action stalled and the fighters were stood back up.

Tsuda looked for an armbar after being taken down in round three, but Yokota powered out and went to work from half guard, only for the fight to be stood back up. There was still time for Yokota to secure another takedown and the approval of all five judges for a unanimous decision win.

Yoshiyuki Nakanishi successfully defended his Deep light heavyweight belt with a rugged stoppage win over Shunsuke Inoue. The champion scored multiple takedowns in the opening round of the rematch, as well as connecting with head kicks and punches.

Nakanishi came out swinging at the start of the second, but Inoue held his ground and returned fire, only to be instantly taken down. The champion capitalized with a series of ruthless elbows, the last of which appeared to leave Inoue out cold. Referee Yoshinori Umeki halted the fight 58 seconds into round two.

Kenji Osawa and Takafumi Otsuka looked to be in a hurry as they vied for the vacant Deep bantamweight belt. The 135-pounders threw fast, hard punches in the opening round, with Osawa landing a clean left from the southpaw stance which buckled Otsuka’s knees. Otsuka responded with a crisp one-two combination and a flying knee.

There was less striking on display in round two, where Osawa came close to finishing the fight with a guillotine. Otsuka came on strong in the final round, repeatedly ripping punches to the body and head of his opponent before dropping for takedowns.

The fight finished with both men throwing flurries of punches, but Otsuka’s aggression and work rate were enough to secure him a unanimous decision win and start his second reign as Deep bantamweight champ. Osawa, an 11-year veteran of the Japanese scene, announced his retirement following the loss.

With the vacant Deep welterweight title on the line, Taisuke Okuno and Yuta Watanabe engaged in a bloody boxing match with neither fighter interested in doing anything except throw punches. Despite remaining in the pocket throughout, Okuno took significant damage, and his face was already a bloody mess when his corner called off the fight 26 seconds into round three.

Former Sengoku champ Masanori Kanehara had a six-fight winning streak snapped in ignominious fashion when he was disqualified in the opening round of his bout with Toshiaki Kitada. Referee Masato Fukuda ruled that Kanehara, whose head was snared in a guillotine, deliberately pulled his opponent under the ropes to escape the choke, injuring Kitada so badly that the bout was halted after only 1:37.