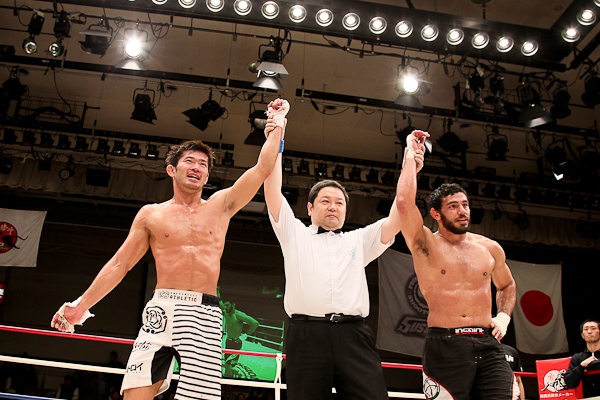 
TOKYO -- Shooto Pacific Rim 143-pound tournament finalists Guy Delumeau and Wataru Miki capped an outstanding night of fights on Sunday in the main event of Shooto’s “Survivor Tournament Final,” only to be ultimately dampened by the judges of their bout.

Instead of kicking off 2012 by crowning a new Shooto 143-pound Pacific Rim champion, Delumeau and Miki fought to a contentious split draw after three close rounds inside Korakuen Hall. 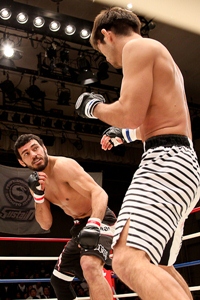 T. Irei
Delumeau got a raw deal.
“I wish I’d made it more decisive,” said a smiling but frustrated Delumeau, post-fight. “It’s what happens when you let it go to the judges, but I think I won. He may have got in some punches and maybe that looked a little bad, but it wasn’t anything hard. Even the knees weren’t that hard.”

Indeed, the first round arguably belonged to the Japanese fighter, who edged Delumeau on the feet with jabs, stiff southpaw straights and big knees to the body whenever the Hawaiian transplant barreled forward for takedowns.

Delumeau was more successful with takedowns in the second frame however, slamming Miki to the canvas from the rear waist-lock. To make things interesting, the American tried for a rather exotic twister submission finish upon taking Miki’s back, followed by a “banana split” crotch-ripper when the Japanese fighter escaped. Miki escaped and Delumeau started from square one, putting Miki on his posterior against the ropes before breaking him down to his back before the bell.

“I like that single-leg ride and was going for that twister, but he could sense it coming and countered. I went for the banana split and could see him cringing, but I eventually lost position doing it,” admits Delumeau. “I think it let him stand up a few times when I could’ve just held him there all round.”

Undeterred, Delumeau tried again for the twister in the third period, giving Miki another avenue for escape. Delumeau managed to get the fight down and onto Miki’s back twice more, but a Miki reversal into the judo press and several kimura attempts from bottom appeared to muddy the waters for some of the ringside judges.

Though Delumeau did enough to take the final frame for a 29-28 Sherdog.com scorecard, only referee and in-ring judge Toshiharu Suzuki had the same score. Judge Tadashi Yokoyama had it instead 29-28 for Miki, while judge Tomohiro Tanaka scored the bout a 29-29 draw.

“Today [may] feel like s---, but tomorrow I’ll be back in the gym. It was great to have my first main event in Korakuen Hall. I’m real comfortable with it. I just have to prove myself and win more fans. I’ve got my work cut out for me this year,” said Delumeau.

Miki was more reserved in his comments, stating, “I don’t have any arguments with the decision. Immediately after the fight, I didn’t know whether I’d won or lost. I don’t know where the belt will go either. It depends on Shooto. I’ll leave it in their hands.”

Interestingly, this isn't Miki’s first draw in Shooto’s “Survivor Tournament” as he drew with Tenkei “Fujimiya” Oda in the November semifinals. Miki offered a diplomatic “no comment” on this second occurrence, however.

According to Shooto officials, the aforementioned Fujimiya will get the next crack at the vacant 143-pound Pac-Rim title, along with a fighter selected from their Pacific Rim rankings, rather than Sunday night’s drawing finalists. 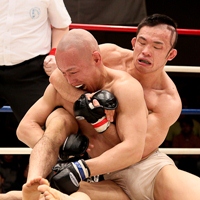 The first frame saw the champion roughing the challenger up by pushing his way into the clinch, where Ogikubo mashed with short punches to the head and body. The second period looked to be more of the same until, in the final minute, Hadairo got the takedown. From above in the champ’s guard, the “skin-colored” challenger dropped a big barrage of punches for the final minute, throwing the champ’s defense into question.

Ogikubo resurged to get the first takedown in the final stanza, but Suzuki quickly reversed to get more time in dropping ground-and-pound. Ogikubo barely sealed the round getting another takedown and securing back mount, though Suzuki was almost able to free himself. The champ apparently did enough to keep his strap, as judges Kanno and Yokoyama ruled the bout 30-28 in his favor, while judge Suzuki had it 29-28.

“Sorry for the unexciting fight,” apologized Okigubo. “I wanted to strike more, but ended up clinching instead. Some of the folks in the audience said it was a bit of a downer, so I apologize for that.”

Ueda almost had the fight in the bag in the first frame after storming the 2010 Shooto rookie tournament champ with a takedown and arm-triangle choke. Horiguchi soon escaped and brought the fight back to his feet, pot-shotting Ueda with body kicks and right straights. Ueda again put Horiguchi in trouble in the second, almost locking him up in a crucifix until being reversed, landing Horiguchi on top in side control. Although staying on his bike and batting away most of Ueda’s takedown attempts, the few instances the bout hit the floor favored the former champ. 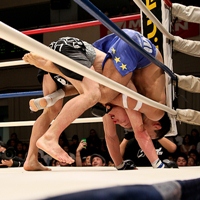 T. Irei
Ueda edged Horiguchi on the ground.
After a rattling right hand put Ueda down early in the third, Horiguchi’s miscalculation in following his downed-but-not-out opponent cost him. Ueda soon reversed to take Horiguchi’s back for the remainder of the round, where he threatened with big punches and multiple rear-naked choke attempts. As such, the former champ was able to leave on a win, courtesy of judges Yokoyama and Suzuki’s 29-28 cards, while a less certain judge Tanaka ruled the bout a 29-29 draw.

“He’s too strong so there was nothing I could’ve done in there,” said a humble Ueda after the fight.

Known for his dry personality and nigh-robotic politeness reflex, Ueda got his fair share of laughs and applause in acknowledging the fact that his bout with Horiguchi garnered such a loud reaction from the audience in attendance. The applause only grew when Ueda gave what was essentially his farewell, stating, “Thank you all for supporting me. I want to go to America and show my skills that I developed here in Shooto.”

Rebounding from his surprise drubbing at the hands of Akihiro Murayama last September, Keita “K-Taro” Nakamura got back into the winner’s circle by dominating Yoichiro Sato in a 168-pound bout. UFC veteran Nakamura kept things simple by going for takedowns to drop punches from top in guard while the former Pacific Rim champion either defended or threw punches from bottom. Sato’s only real offense came when referee Suzuki called breaks at the end of the final two frames, when Sato was able to mark up Nakamura with big right hands and knees in the clinch. However, K-Taro was quick to put the fight back on the floor, where he continued his barrage to net 30-27 cards from judges Kanno and Suzuki. Only judge Tanaka had the oddball 29-29 draw card. 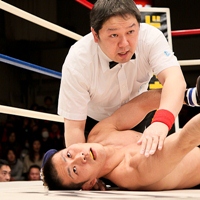 T. Irei
Ota had his lights shut off.
In a brief but sweet 123-pound affair, Haruo Ochi dispatched Masaaki Sugawara in just over a minute’s time. Navigating past Sugawara’s longer limbs, the compact Ochi stung with punches on the inside until he clipped his taller opponent with a big right hook on the chin. Sugawara went down quickly and ate more Ochi punches in a daze, resulting in referee Suzuki stepping in for the save at the 1:02 mark.

In a competitive 154-pound affair, Akira Okada battled takedown-for-takedown with former stablemate Koji Nishioka, arguably coming out on the shorter end after 10 minutes. However, his overwhelming ground-and-pound in the moments Okada spent on top in guard nonetheless trumped Nishioka on all three scorecards, as judges Kanno, Yokoyama, and Suzuki all cast 20-18 ballots for Okada.

Fumihiko Kawamura started the evening with a bang, putting an incoming and careless Yohei Ota to sleep with a 14-second right-hook knockout, while just prior, fellow 154-pounder Koshi Matsumoto punished Kazuya Satomoto from back-mount until sinking a rear-naked choke for the tap at the 2:07 mark of the second frame.