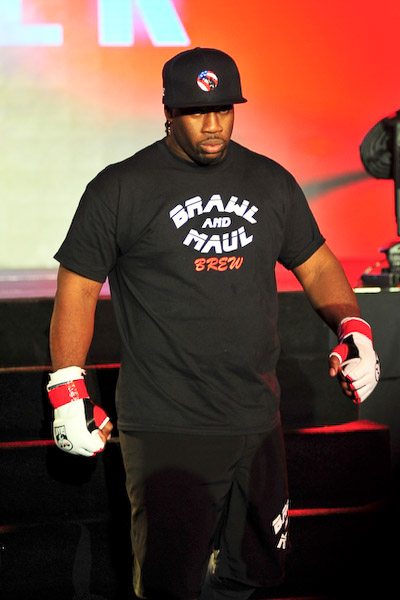 The once-beaten Estonian heavyweight prospect submitted Maro Perak with a first-round keylock in the M-1 Challenge 55 headliner on Saturday at the Tbilisi Sports Palace in Tbilisi, Georgia. M-1 Global staged the event in honor of the late Guram Gugenishvili, the promising Georgian heavyweight who was killed in a car accident at the age of 28 in November.

The 24-year-old Smoldarev (10-1) has delivered eight of his 10 victories by knockout, technical knockout or submission, six of them inside one round. Perak (23-5-1) has dropped back-to-back bouts for the first time in his career.

In the heavyweight co-main event, former M-1 Global champion Kenny Garner dispatched Aslambek Musaev with a second-round arm-triangle choke. American Top Team’s Garner (15-8) brought it to a close 2:50 into round two, as he executed the first choke-induced submission of his career.

Musaev (4-2) -- who holds the Guinness Book-sanctioned world record for weight lifting with only one arm -- has lost two of his last three fights after starting his career a perfect 3-0.

Meanwhile, once-beaten Georgian Nodar Kudukhashvili made the most of his promotional debut, as he secured a unanimous decision over Ultimate Fighting Championship veteran Luigi Fioravanti in their middleweight showcase.

Kudukhasvhili (8-1) has rebounded with three straight wins since suffering his only professional defeat against “The Ultimate Fighter” Season 17 finalist Uriah Hall in June 2012. Fioravanti (25-13) has gone 11-8 since being released by the UFC following a technical knockout loss to Anthony Johnson a little more than five years ago.

Elsewhere, Max Coga stunned the previously unbeaten Pavel Vitruk, as he submitted the lauded Ukrainian prospect with a third-round rear-naked choke in their featured tilt at 145 pounds. Vitruk (12-1) conceded defeat 2:36 into round three.

Coga (11-3), a 25-year-old teammate of Bellator MMA standout Daniel Weichel, entered the match with losses in two of his previous three appearances.

In other action, former M-1 Global champion Artiom Damkovsky (20-9) recorded his fourth consecutive victory, as he captured a unanimous decision from Heydar Mamedaliev (7-1) in their lightweight duel; Red Fury Fight Team’s Arsen Abdulkerimov (8-2) tapped Levan Razmadze (5-1) with an armbar 3:58 into the third round of their heavyweight encounter; Cage Warriors Fighting Championship alum Enoc Solves Torres (16-8) submitted Ibrahim Tebilov (7-3) with a rear-naked choke 95 seconds into the third round of their middleweight showdown; Batraz Agaev (2-0) finished Lukasz Borowski (3-3) with a rear-naked choke 2:09 into the first round of their battle at 205 pounds; Artem Frolov (3-0) tapped Artur Odilbekov (2-4) with a guillotine choke 97 seconds into the first round of their middleweight scrap; Raul Tutarauli (2-2) submitted Artur Aliev (1-1) with a rear-naked choke 1:45 into the third round of their clash at 155 pounds; Kurbanali Abdusalamov (4-2) took a unanimous decision against Archil Taziashvili (0-2) in their three-round featherweight affair; and Soso Nizharadze (1-0) walked away from his 145-pound matchup with Shamil Alibekov (0-2) with a unanimous decision.