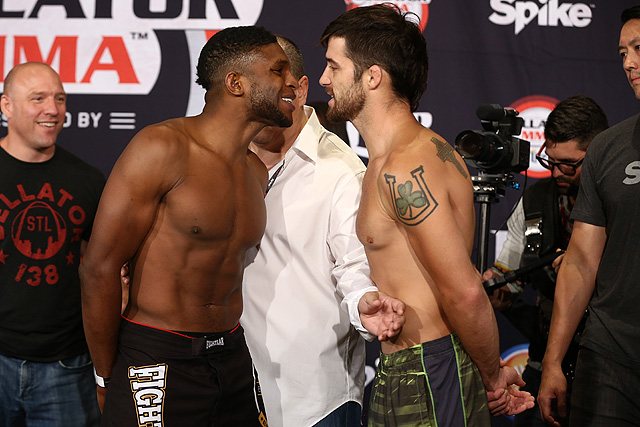 
Dennis Olson had fallen on hard times in his fighting career. After starting out with a respectable 11-3 record, he was brought back to Bellator for a second time. It was at that point when Olson’s career took a turn for the worse; he lost five of his next seven bouts and had to step away from caged combat to reevaluate things.

“Those other fights were years ago,” Olson reflected in a recent interview with Sherdog.com. “I obviously wasn’t as skilled as I am now, and mentally, I was younger. I was doing this for different reasons, and back then, I didn’t know exactly why I was [fighting]. My fight against [Dan] Cramer, I took on four days’ notice, and my fight with [David] Branch, he was fighting on a whole different level and I was fighting up a weight class. Not taking away from either of those guys’ wins, but I was stepping up to the big show and I was out of my weight class.

“That’s something I learned from, and I think that’s something I have over a lot of these young fighters, is that I took these opportunities, kept grinding through it and I learned,” he continued. “I’ve won, I’ve lost, but I have a winning record and some of those losses were fights that, looking back, I probably shouldn’t have taken. But, if I didn’t take those fights, I wouldn’t have gained the experience and I wouldn’t have learned. I think that is the main difference between then and now is my experience.”

Olson isn’t the first fighter to have hit a rough patch in his career, nor will he be the last. He said he never lost focus or passion for fighting, but after coming up short in so many battles during that two-plus year stint, he questioned his motivation for the sport and was perplexed why he kept losing. Frustration was at an all-time high because he was training hard with a good team, but things weren’t coming together. The break from competing was essential.

“I was kind of beating my head up against the wall and I wasn’t getting to where I wanted or needed to be,” he stated. “A combination of stuff all just came together at once. The [John Howard] fight was a pretty big opportunity that I couldn’t pass up, but I told myself that I was getting older and that I needed some sort of backup plan if it didn’t work out. When I didn’t get the W, I had to go elsewhere and figure myself out. I kept training and now I’m back with my main school and I’m training full-time again for about a year now.”

It’s a good thing Olson decided to come back to MMA, because the New Hampshirite stormed back with a win in a regional promotion in April. After toppling Jarod Lawton, Olson was invited back to Bellator. He’s slated to face Paul Daley tonight in one of the featured bouts of Bellator 140 and he knows he has a tall task ahead of him. Most claim that Daley is by far the toughest test of his career, but Olson disagrees.

“I know Daley is a real dangerous guy and he’s got heavy hands, but most of his fights have been over in the U.K.,” he remarked. “I don’t know if that means anything or what they have over there, but as far as overall skill level, I don’t see him as the highest-quality fighter that I’ve fought. He’s taken on a lot of great competition but as far as his overall skills, I think I’ve seen tougher competition, more versatile competition than him.”

Daley seems to be as focused as ever, and he told Sherdog.com that he is treating Olson as if he is the greatest fighter that he’ll have ever faced. While his record might indicate otherwise, “Semtex” said he’s preparing for a very dangerous opponent. Still, the Brit promised an early knockout and that Olson won’t know what happened until it’s too late.

“I’m not threatened by the fight at all and I already know what Daley’s weapons are,” Olson said. “I’m going to do my best to defend them and use mine on him. “I think he’ll be aggressive because the shorter the fight is, the better for him and the longer the fight goes, the better it is for me. I’ve always done well in the late rounds, especially when I’m in the shape that I’m in now. He’s really dangerous early so if I can protect myself for about three minutes, he’ll be in for a long fight.”

If the fight is dragged into the later rounds, the chances of Olson pulling off the upset increase tremendously. He’s got a wrestling background, and nine of his 14 wins in MMA have come via submission. The notion that Olson will stop Daley with strikes seems unrealistic even to Olson. But, Olson chuckled, he wouldn’t pass up the opportunity to knock out “Semtex.”

“I’d love to knock him out,” laughed Olson, whose sole professional KO came in April 2007. “That’d be insane. I was just talking to my friend the other day about that and how I would just go crazy if I got a knockout. I’ve dropped guys with one shot a lot of times, but they’ve always recovered. I’ve been working on my boxing and everything is starting to really come together. I’m comfortable wherever the fight goes.”

Scoring a knockout over the dangerous KO machine is one thing that seemingly only dreams are made of. Handing Daley a straightforward defeat is something more within Olson’s grasp, especially by submission. Olson knows he is expected to lose tonight, but he doesn’t care what the so-called experts think. He says he is in the best shape of his life and is more than ready to shock the world.