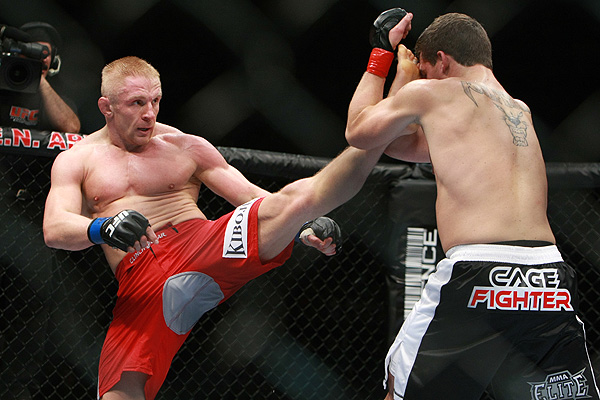 Dennis Siver has been suspended for nine months by the NAC. | Dave Mandel/Sherdog.com


Dennis Siver has been suspended and fined by the Nevada Athletic Commission for his failed drug test at UFC 168.

NAC officials handed down the ruling Thursday, suspending the Russian-born German for nine months and fining him 30 percent of his fight purse. His unanimous decision victory over Manny Gamburyan has been changed to a no-contest.

Siver tested positive for human chorionic gonadotropin, better known as hCG. Sometimes used as a fertility drug for women, hCG can also be used to increase testosterone production in men. The drug was drew headlines in 2009, when former Major League Baseball All Star Manny Ramirez tested positive for hCG and received a 50-game suspension.

UFC 168 took place Dec. 28 at the MGM Grand Garden Arena in Las Vegas and saw Siver outpoint Gamburyan on scores of 29-28 across the board. The show was headlined by a middleweight title rematch pitting Chris Weidman against Anderson Silva, with Weidman retaining his title after checking a low kick and breaking Silva’s left leg.

Prior to his clash with Gamburyan, Siver suffered a third-round knockout at the hands of Cub Swanson last July. That setback followed back-to-back wins for the 31-fight pro, who outpointed Diego Nunes and Nam Phan in 2012.