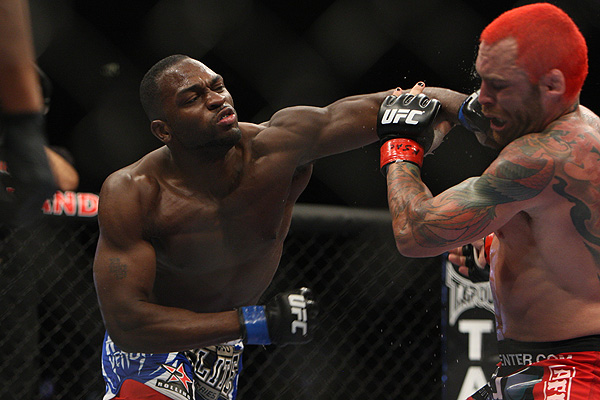 Derek Brunson is 2-1 in the UFC. | Dave Mandel/Sherdog.com


A middleweight clash between former Strikeforce talents Derek Brunson and Lorenz Larkin will go down at UFC 176.

Brunson confirmed the pairing on Saturday following an initial report from MMAJunkie.com. Additionally, promotion officials announced that James Vick will face Octagon newcomer Walmir Lazaro in a lightweight pairing at the Aug. 2 event.


Advertisement
UFC 176 takes place at the Staples Center in Los Angeles and is headlined by a featherweight title rematch between Jose Aldo and Chad Mendes.

After earning triumphs over Chris Leben and Brian Houston in his first two promotional appearances, Brunson succumbed to Yoel Romero via third-round TKO in his most recent outing at UFC Fight Night “Rockhold vs. Philippou” in January.

Larkin, meanwhile, is 1-3 in the Octagon, including back-to-back losses to Philippou and Brad Tavares. “Monsoon” last tasted victory in November, when he outpointed Chris Camozzi at “Fight for the Troops 3.”

A member of “The Ultimate Fighter 15” cast, Vick is 5-0 as a professional. He submitted Ramsey Nijem with a first-round guillotine choke in his UFC debut this past August. Lazaro trains with the famed Nova Uniao camp and is 12-2 as a pro. “Bidu” last competed in April, scoring a first-round stoppage of Ederson Moreira at Shoot Brazil 47.