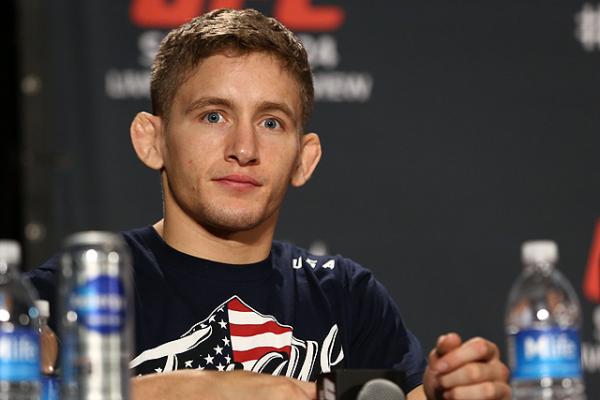 Exactly when he will get to try and build upon the momentum of last May, when he earned his second victory with the Las Vegas-based promotion, is unclear. Head trauma is pretty good at muddling things up that way.

UFC 173 was a momentous night for Team Alpha Male. T.J. Dillashaw authored one of 2014’s greatest upsets as he confounded Renan Barao for four rounds before ending the then bantamweight champion’s 22-fight winning streak with one last salvo in the fifth stanza. Dillashaw’s victory brought the celebrated camp its first UFC title.

Meanwhile, Holdsworth continued to establish himself as one of the Sacramento-based team’s rising stars with a unanimous decision triumph over Chico Camus on the evening’s undercard. Despite neutralizing his opponent’s offense for the better part of 15 minutes through takedowns and submission attempts, Holdsworth was not particularly happy with his performance.

Considering the circumstances under which he fought, the 27-year-old bantamweight probably isn’t giving himself enough credit.

Holdsworth says he faced Camus while experiencing the effects of lingering concussion symptoms, his second such injury in an approximately six-month span.

“I was feeling symptoms that whole camp for Chico. I think it showed in my fight. I kind of played it safe, and I was just a little hesitant,” Holdsworth told Sherdog.com. “I didn’t pull the trigger like I usually do, because I hadn’t sparred for two months before that.

“It’s a big learning experience. Head trauma is no joke, and I’m finally starting to kind of understand it. I can’t be having all these gym wars year round. You’ve got to save your head for the fights.”

Holdsworth said he also had an earlier concussion in camp prior to his win over Davey Grant at the “TUF 18” finale. He admits to being uneducated about the potential effects of head trauma and how to treat it. At the time, it didn’t seem like a big deal anyway, because whatever symptoms he had went away after about a week or two.

“I got back into sparring before the finale. Everything was good,” Holdsworth said.

He did, however, choose to err on the side of caution when UFC matchmaker Sean Shelby called to offer him another fight shortly after his second-round submission of Grant on Nov. 30, 2013.

“I told Sean I wasn’t sparring yet because I wanted to heal up my head a little bit more,” he said. “And just take some time, there was no rush. Once I was feeling better, I got back into training and let the UFC know I was ready to fight.”

Approximately two to three weeks after Holdsworth accepted a fight at UFC 173 against Kyung Ho Kang -- who was eventually replaced by Camus -- he suffered another concussion in training.

“I hit my head on the mat in wrestling. The next day was sparring, those two together,” he explained. “I train with the best guys in the world. It’s rough in there; it’s like a UFC fight every day. So I had to tough that out that whole camp.”

Part of the reason Holdsworth believes his performance suffered against Camus is that he abstained from sparring for the majority of his camp, so he wasn’t as sharp as he could have been. However, he also knows that when he has his next fight booked, he will have to scale back the full-contact training in order to prolong his career.

“For me, I know myself. I can’t spar year round, it’s not smart to,” he said. “Before you had coaches, all you want to do is spar and get in there. Everyone’s starting to understand head trauma….you can’t spar every day. You’ve got to do more drilling and more controlled sparring. Of course there’s times you go hard, but you’ve got to limit that stuff and save your brain -- for not just the fights but for your future.”

The good news is that Holdsworth is getting better . He recently resumed drilling and training, but he is not yet 100-percent ready to resume full MMA activities -- especially sparring.

As a result, a target date for his Octagon return remains unknown. While it’s a relief to no longer be confined to the sidelines, Holdsworth admits that he hasn’t completely recovered.

“I’m starting to feel a lot better, but some days I feel a little bit off,” he said. “I’m having more better days than bad days. I’m just happy to be getting back into training. I took a couple months off. It’s real frustrating. I’ve been bored just watching people train, just being there and trying to support but it’s just not the same. You’re not in there grinding it out with your team.”

Recently, Holdsworth has been spending time in Colorado with some of his Team Alpha Male brethren to help Duane Ludwig with the grand opening of his new gym. Ludwig has been an integral part of the camp’s success in recent months, although his move to Colorado signaled his departure from California as a full-time striking coach. In his absence, UFC veteran Martin Kampmann has assumed many of Ludwig’s duties at the gym’s home base.

Still, like many of his teammates, including Dillashaw, Holdsworth plans to continue working with Ludwig and will have the coach in his corner when he is ready to return to action.

“I think I’ll always use Duane. He’s always been real good to me, and I think he’s a great coach,” Holdsworth said. “I love having him in my corner. I’m close to Martin too, but I kinda got my corner set up. I like having Duane, Fabio [Prado] and either Lance Palmer or Justin Buchholz. That’s usually my go-to corner.”

Since he last fought, Holdsworth has seen his teammates continue to thrive in the UFC. That includes current roommate Cody Garbrandt, another highly-touted talent who knocked out Marcus Brimage in the third round of his promotional debut at UFC 182. Holdsworth is proud of his training partners, but their success is also a source of motivation.

“I’m hungry. I haven’t been this hungry for a while. This is probably the most time I’ve had to sit out of training my whole life,” he said. “It’s a big learned lesson, but I guarantee you when I come back, I want to f--k some s--t up.”

Despite the recent rough patch, Holdsworth said he never contemplated retirement. He did, however, emerge with a better grasp on how to manage his training and how to respond to those times when his head feels cloudy or fuzzy. His love for the sport has not faded.

“I guess that [retirement] always runs by your head with any kind of injury, but I definitely have some unfinished business,” he said. “I’m not a quitter. I’m still young. I can take more time off and come back and still do big things in this sport. I just turned 27…..I’m gonna go out there and let people know I’m not done.”