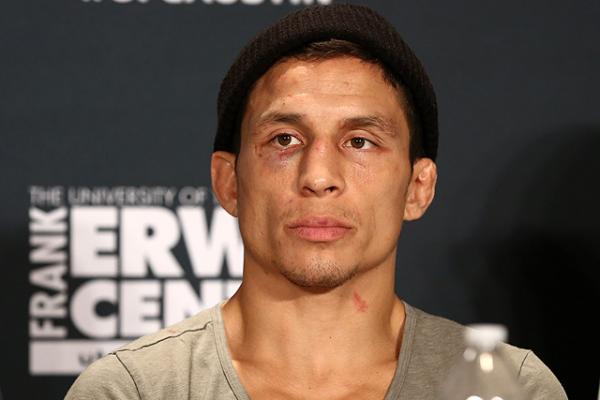 
Joseph Benavidez is in a tough spot.

The Team Alpha Male product is ranked No. 2 in the UFC’s flyweight division, but considering that he already has two losses to reigning champion Demetrious Johnson, he is unlikely to receive another title shot unless “Mighty Mouse” relinquishes the belt.

Leave it to Benavidez to make the best of his current predicament. At UFC Fight Night Austin, the WEC veteran won for the fifth time in six outings, taking a unanimous decision over a game Dustin Ortiz. While he was never able to put the Roufusport representative away, Benavidez was in control throughout, landing with speed, power and volume to sweep the judges’ scorecards.

A stoppage would have been ideal, but it was still the type of statement Benavidez wanted to make in order to remain near the top of his weight class.

“I always want the finish, and I know what I’m capable of,” Benavidez said. “On the same token, I went out there and I wanted to beat him worse than anyone else has. He’s fought some tough guys in the division. I think his other losses are to two really good title contenders – John Moraga and Ian McCall [Ortiz lost to McCall at Tachi Palace Fights 9]. I wanted to beat him and dominate him worse than those guys had just to separate myself. I think I did, so I’m pleased with that part of it. The only thing I’m really not pleased with is not getting a finish.”

Benavidez threw -- and landed – with ill intent throughout the 125-pound affair. Ortiz somehow managed to absorb everything his opponent had to offer and kept on coming.

“A guy like Dustin can just take shots, but once I started landing them it was so fun,” Benavidez said. “It was like a challenge, like, ‘Oh I can keep landing them?’” I’m glad we got to mix in some wrestling…He’s an awesome guy to scramble with and get into wrestling exchanges. It was nice to mix it up in that aspect of the game as well. That’s just what I do. I think everyone that watches my fights expects a finish and expects excitement. I can’t help it. I just want to go in there and finish the guy with every punch.”

At the moment, Benavidez doesn’t have a particular opponent in his sights. When your only career losses have come to former champions -- twice to Johnson and twice to former WEC and UFC bantamweight titlist Dominick Cruz – it becomes more difficult to call your shots.

“In the position I’m in, No. 2 in the world, it doesn’t make sense to call anybody out,” Benavidez said. “It’s like, ‘I’m gonna fight that guy. Well, he’s ranked No. 10 -- that does nothing for you.’ Most of the fights I’m comfortable with I’m not gonna have a ton to gain from them, but I’ve got to get these little battles and things that motivate me like beating him [Ortiz] worse than anyone. Use it as a theme to get better.

“There’s no one in particular that I want to fight. I know the matchmakers have done a great job since I’ve been in this position. I’m just excited to see what they have on board for me next. I’ll be ready. I’ll just keep doing my thing.”