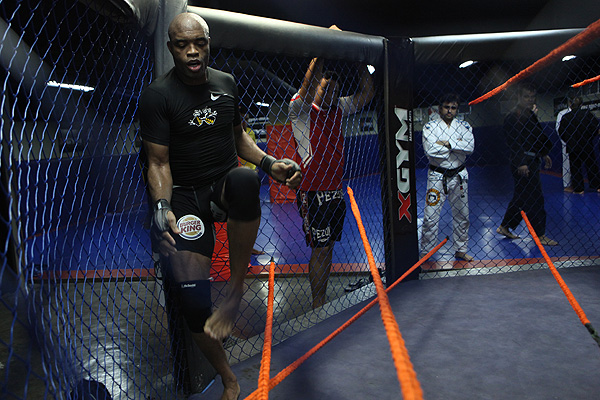 Despite Anderson Silva’s continual insistence that he has little interest in fighting Jon Jones, the UFC middleweight champion was once again forced to address the issue following his dominant UFC 153 victory over Stephan Bonnar at HSBC Arena in Rio de Janeiro.

Though the middleweight champion is still resistant to the idea of facing the reigning light heavyweight pacesetter, the bout has nonetheless been a popular topic of conversation for fans and media alike. Even UFC President Dana White chimed in on the potential contest during Saturday night’s post-fight press conference, asserting that he would be able to convince “The Spider” to take the fight by appealing to his wallet.

“I know he’s been saying ‘no,’” said White, “but, for the amount of money that would be offered for that fight, I guarantee you I will make Anderson Silva say ‘yes.’”

Silva, however, immediately dismissed the idea that a large payday could sway him toward fighting “Bones.”

“Since I started training martial arts, I never fought for the money. I’m thankful for everything that I am able to get, because when I started, there was no money in this,” said Silva. “This is not something that I would like to haggle [over], because Jon Jones has also mentioned that he would not like the fight. I would not like for this to happen because of [the light heavyweights] on my team. We have other athletes in his division that can fight [Jones]. And I’m getting old, guys. Let Jon Jones have [the younger guys in his own division], you know?”

Silva, 37, also addressed other options for his next fight, stating that he would continue to defend his 185-pound title but was also open to a potential super-fight with reigning welterweight king Georges St. Pierre. However, that booking is contingent upon “Rush” defeating interim belt holder Carlos Condit next month at UFC 154.

Silva put forth another masterful performance in his headlining contest with Bonnar, using his speed and elusiveness to effectively toy with his larger opponent. At one point during the bout, Silva stood flat-footed with his back against the cage, inviting the American to strike him as Silva looked to counter. While some may have viewed the approach as foolhardy, Silva says it was all part of his strategy.

“Rafael ‘Feijao’ [Cavalcante] is the guy who [helps with my takedown defense], and one of the things he told me was that [Bonnar] was so much heavier that I needed to defend myself well from [takedowns],” said Silva. “He told me if I kept my back to the Octagon that it would be much harder for [Bonnar] to take me down, because he would have to use a lot of strength.”

Nevertheless, Silva still caught flak from his corner over his in-cage behavior. At one point, the champion even gestured to his handlers to relax as he jockeyed for position with Bonnar against the cage before executing a trip that put Bonnar off balance and opened him up for Silva’s fight-ending knee to the body.

“Everyone in my corner was trying to kill me, but I just felt comfortable with my back against the cage,” said Silva. “As I’m from the lower weight division, I was much quicker than he was, so I could [slip] past his strikes before he made them. For me, it was easier to have my back to the cage, and it helped me conduct the fight the way I wanted.”

Though admittedly growing no younger, Silva said that he would still like to compete for another five years and retire at the top of his game. However, the Brazilian also knows that proposition could prove to be easier said than done.

“Obviously, I would like to stop at the top. I think that is every athlete’s dream. But as I have the intention of fighting for another five years, it’s still something that is very vague,” said Silva. “It’s not a fact, so I have to train a lot and focus. It is truly very difficult to say that I will continue to be at the top for the next five years that I intend to continue fighting.”