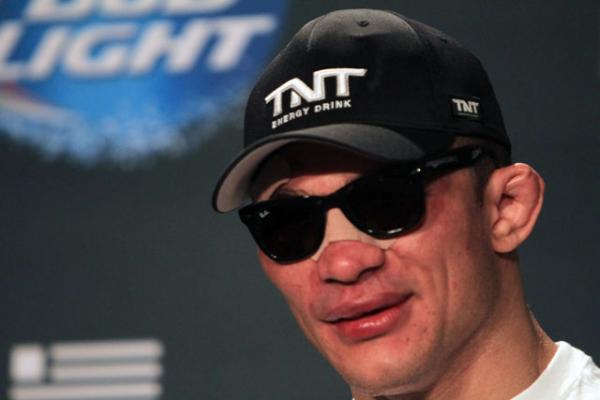 
Former UFC heavyweight champion Junior dos Santos has been involved in some of the division’s most punishing fights over the past two years.

His UFC on Fox 13 headlining bout against Stipe Miocic was no different, a 25-minute slugfest that left his normally smiling visage bloodied, swollen and bruised. The good news was, that unlike his last appearance – a humbling technical knockout loss in a trilogy bout with Cain Velasquez at UFC 166 – “Cigano” came out on the winning end on Saturday night.

While dos Santos claimed that his post-fight doctor visit revealed no significant injuries, it is hard not to wonder about the toll the past two years have taken on the Brazilian’s body. In victory, “Cigano” absorbed 89 significant strikes against Miocic, adding to the 234 he has accrued in two lopsided defeats against Velasquez since December 2012.

Dos Santos, however, does not appear to be concerned about the effect those battles could have on his longevity.

I can go a very long [time], man. I really believe I’m gonna have a long career,” dos Santos said at Saturday’s post-fight press conference. “It doesn’t matter too much. It’s part of the [game]. I get swollen very easy. It happens. I’m feeling OK, just swollen.”

Fighting for the first time since October 2013, dos Santos started slowly. Miocic tagged the Brazilian repeatedly with right hands, often connecting emphatically with power strikes upon exiting the clinch. The Strong Style Fight Team representative appeared to have dos Santos on his heels more than once, but for ex-titlist kept his wits and got stronger as the bout advanced.

“I think I was doing OK, but yeah, he did great in the first two rounds,” dos Santos said. “He’s a really tough opponent [and] came very well prepared for this fight. I believe I can win any fight. It doesn’t matter what happens during the fight, I will keep believing until the end of the fight.

“It’s hard to understand sometimes, but I really believe I have a warrior heart.”

The close nature of the bout led to a little bit of uncertainty when the final scorecards were announced. However, UFC President Dana White believes the judges got it right, despite Miocic’s impressive effort in defeat.

“That was the right decision. But let me tell you what: [dos Santos] slowed down a lot, he took some big shots tonight,” White said. “His eye starts to swell up and his cheekbones start to swell up and that was early. If that was a three-round fight, Stipe wins that fight. Junior got busted up early and the guy has so much heart. He just keeps coming. No matter what you hit this guy with, no matter how hard you hit him, he just keeps moving forward. He’s so hard to put away.”

Dos Santos, who trained with the vaunted Nova Uniao team ahead of the bout, remains one of the world’s top-ranked heavyweights. Whether he is close to another title shot is another matter entirely, especially if Velasquez is still the champion.

White was noncommittal in regards to a potential fourth meeting between dos Santos and Velasquez sometime in the near future.

“Where does this put him right now? I don’t know,” White said. [Fabricio] Werdum is going to fight Cain Velasquez, and then we’ll see where we go from there. After the fight tonight... I ‘m no doctor, but I don’t see Junior fighting anytime soon.”

Dos Santos, meanwhile, is taking a wait-and-see approach when it comes to his next move.

“I’m not thinking about the title right now, but anything the UFC wants me to do, whoever they decide to be my next opponent, I will be glad to face,” he said. “I really believe this fight showed a lot of good things about both of us. Miocic is a great athlete. I try my best all the time. This time I won.”