In the end, Nick Diaz had too many skills for Evangelista “Cyborg” Santos. True grit was chief among them.

Diaz survived a vicious leg attack from the challenger and defended his welterweight crown in the Strikeforce “Diaz vs. Cyborg” headliner on Saturday, as he submitted Santos with a second-round armbar at the HP Pavilion in San Jose, Calif. Santos, his arm violently extended, tapped out 4:50 into round two.

The win was the ninth straight for the world-ranked Diaz, the last two of which have come as Strikeforce’s welterweight king. Santos, a Brazilian jiu-jitsu black belt, had only been submitted once previously in 31 professional appearances entering the match.

Cyborg took the fight to the favorite from the start and exacted a heavy toll on Diaz with a series of heavy leg kicks. He landed more than a dozen of them to Diaz’s lead leg in the first round alone. The champion responded in trademark fashion, as he rocked the Brazilian with a crisp left hand and swarmed him with punches.

“I should have checked his kicks a little better,” Diaz said. “I think he tried to put everything into those first two rounds.” 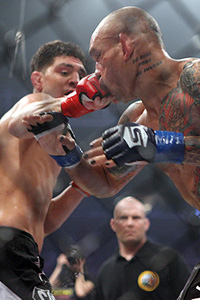 D. Mandel
Diaz (left) and Santos slugged it out.
Cyborg went back to the legs in the second round, and Diaz’s pace slowed considerably. However, the challenger took down the champion with 34 seconds left in the round, and, there, Diaz proved he was in a different league altogether. The 27-year-old Cesar Gracie protégé quickly maneuvered for the armbar and stretched the arm for the submission as Cyborg tried and failed to roll out of danger.

The defeat snapped a two-fight winning streak for Santos, who failed in his bid to join wife Cristiane “Cyborg” Santos in Strikeforce’s circle of champions. Still, he earned Diaz’s admiration in the main event.

“I respect the way he fights,” Diaz said. “He doesn’t play around. He came out here, and he fought me. He doesn’t [play it safe]. He tries to get the knockout for you guys.”

Ronaldo “Jacare” Souza smothered, softened and ultimately submitted Robbie Lawler with a third-round rear-naked choke, as the Brazilian defended his Strikeforce middleweight crown in the co-main event. Lawler tapped out 2:00 into round three.

A former EliteXC middleweight champion, Lawler could not keep himself upright long enough to bring his brutal punching power into play. According to Compustrike data, Jacare kept the fight on the ground for 8:26 of the 12-minute encounter.

“I came prepared for everything,” Souza said through a translator. “I have a great coach, great friends and training partners. I feel great now.”

Still, Lawler had his chance, and it was a golden one. After rising from a takedown in the first round, he put the champion on skates with a clubbing right hand. He backed it up with more power punches but decided to jump into Jacare’s guard and attempted to finish it there. It was a decision he lived to regret, as Souza recovered and pushed the fight deeper.

The world-ranked Jacare, a black belt in Brazilian jiu-jitsu and judo, scored with takedowns in all three rounds and wore down Lawler with suffocating top control. Lawler avoided a pair of attempted armbars in round two, but, as the fight drifted into the third, he again found himself underneath the champion. Jacare transitioned to the back, locked up a body triangle and slithered his arms around the challenger’s neck. With the choke tightened, Lawler had no choice but to surrender.

“[I will fight] whoever Strikeforce brings to me,” said Souza, a five-time Brazilian jiu-jitsu world champion who has rattled off four consecutive victories. “I can’t wait to fight again. Strikeforce, make it happen ASAP.” 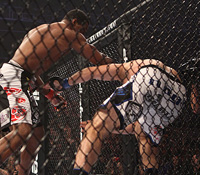 D. Mandel
Walker was too much for Carson.
Two-time NFL All-Pro and 1982 Heisman Trophy winner Herschel Walker mauled an athletically overmatched Scott Carson in a heavyweight showcase, as he forced the stoppage 3:13 into round one.

Walker walked through an opening head kick from Carson, dropped him with a left hand behind the ear roughly 30 seconds into the match and went to work on the ground. The 48-year-old Wrightsville, Ga., native avoided an attempted leg lock, punched and kneed effectively from the back and even scored with a takedown. Walker brought an end to Carson’s Strikeforce debut, as the Californian attempted to return to his feet near the cage. A powerful left hand crumpled him where he stood and forced the referee
to intervene.

“I took a kick, and I think I got a little too excited,” Walker said. “When you’re in an MMA fight, you shouldn’t take a kick like that. One thing [American Kickboxing Academy head trainer] Javier [Mendes] told me was to be on offense. Being a young MMA fighter, I have to control my offense in the cage.”

In a near flawless performance, 10-time Brazilian jiu-jitsu world champion Roger Gracie submitted seasoned AKA representative Trevor Prangley with a rear-naked choke. The end to their featured light heavyweight bout came 4:19 into round one.

Gracie, perhaps the world’s premier submission grappler, settled into the fight with a left jab, kicks to the legs and knees from the clinch. The London-based Brazilian jiu-jitsu black belt scored with a trip takedown midway through the first round, moved to full mount a little more than a minute later and seamlessly took Prangley’s back when the South African attempted to escape from the bottom. From there, the finish was a formality, as Gracie trapped his foe in a body lock and snaked his arms around his neck for the tapout.

“I knew he was heavy-handed, but I had the reach in my favor,” Gracie said. “I played with the jab. I knew he’d come in hard. The plan was to shoot in, and it happened exactly like that.”

Gracie remains unbeaten in four professional MMA appearances, as he carries the torch for the sport’s first family.

“I think that only those inside the family know what [the pressure is like],” he said. “People say there is a lot of pressure. Yeah, the Gracie name is heavy, but when you fight with your family behind you, it’s another wave [of confidence] pushing you forward.”