Zaromskis, the reigning Dream champion, succumbed 4:38 into round one, as Diaz posted his sixth consecutive victory.

Diaz used his length to keep Zaromskis on the end of his punches but found himself on the wrong end of a clubbing right hand that put him on his seat midway through the first frame. Diaz avoided any of the significant follow-up shots Zaromskis lobbed his way and methodically worked his way back into the fight.

The tide began to turn in Diaz’s favor when he started going to the body of his fading opponent. The frenetic pace and digging body shots had Zaromskis teetering on the edge of exhaustion. Any hope he had vanished when Diaz planted him with the right hand. 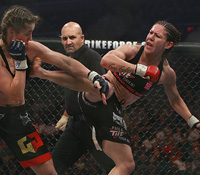 Dave Mandel/Sherdog.com
Cyborg defended her crown.
Strikeforce women’s lightweight champion Cristiane “Cyborg” Santos stopped a game but overmatched Marloes Coenen in the third round of their title match, as she defended her crown for the first time.

Cyborg was in command throughout the bout, stopping all of her opponent’s takedowns and negating her perceived grappling advantage.

Coenen told reporters she would be more than happy to stand and trade with the champion, and she lived up to her promise. She delivered a number of clean, crisp punches, including a number of lead left hands, but Cyborg walked right through them. The difference in physicality and punching power was the deciding factor in the fight.

Cyborg employed a powerful striking game, on the feet and on the ground, and eventually wore down Coenen. The end came in at 3:40 the third round when Cyborg took up dominant position after a weary Coenen pulled guard. She pounded away with punches until referee Jorge Ortiz rescued the Dutch fighter.

“I’m very happy,” Santos said. “I prepared myself very much. I trained a lot.”

Cyborg admitted Coenen was probably her toughest test to date.

Walker displayed an unorthodox striking style, standing upright and shimmying as he looked for an opening. It would not matter much because the 1982 Heisman Trophy winner from Georgia repeatedly took the fight to the ground, where he was clearly more comfortable.

Using a front headlock to wrangle Nagy, Walker transitioned from North-South to side control and to the back mount at will, punching his opponent at every opening. At 47 years of age, Walker showed an impressive fitness level as he outworked his much younger opponent and eventually wore him out.

Nagy tried to work his ground game, but, ultimately, he could not keep up and seemed to give up near the end of the second round. Referee Troy Waugh seemed to be contemplating stopping the bout late in the frame, as Walker pounded away at Nagy from back control.

The third round was a near replica of the first two. Walker scored with the takedown, a slam from the clinch and took Nagy’s back. From there, he punched his way to the stoppage while Nagy offered little resistance. The end came 2:17 into the final round.

“This was very tough,” Walker said. “This is the hardest thing I’ve ever done.”

Walker indicated he would allow his American Kickboxing Academy trainers to determine whether or not he would fight again.

“I’ve got to come back and train,” Walker said. “They’ve got to make that decision for me.” 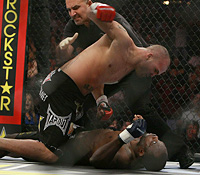 Dave Mandel/Sherdog.com
Lawler rallied to win.
Robbie Lawler rescued a spectacular victory from what looked like impending doom when he knocked out Melvin Manhoef with a blistering overhand right that froze the Dutchman and sent him tumbling to the canvas.

Lawler, who was on the receiving end of a vicious leg attack, did not muster a single meaningful shot until the fight-changing punch. It appeared as if he was going to be outclassed.

Manhoef stalked him around the cage and repeatedly sent him pirouetting away after each successive kick to his lead right leg. Manhoef, known for his explosive striking game, landed at will and had Lawler on the run when, in an instant, the fight was over.

Lawler, backing away and covering up, exploded with the powerful right that scrambled Manhoef. Once he hit the ground, Lawler made sure he would not get back up, as he landed a pair of punches, a left followed by a right.

“This guy’s a killer,” Lawler said. “He was coming after me. I kept my hands up, and I knew I was going to catch him. I just didn’t want to get overextended. I knew I’d have a chance to catch him. His hands seemed to drop once he goes to finish guys, and that’s what I wanted to wait for.”

The stoppage came 3:33 into the first round and seemingly puts Lawler in line for another shot at the Strikeforce middleweight title.

“I’m going to take this win,” Lawler said. “I’m going to run with it, rest my leg. He was kicking the crap out of my leg. We’ll see what happens.” 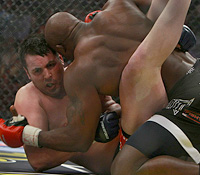 Dave Mandel/Sherdog.com
Lashley vs. Sims.
Bobby Lashley dominated an overmatched Wes Sims, stopping him via strikes midway through the first round of their heavyweight showdown. Lashley easily took the fight to the ground, where he controlled Sims and battered him with punches from within the big man’s guard.

After a rapid-fire series of right hands forced Sims to turn his back, Lashley finished the job by flattening him out and pounding away until referee Troy Waugh saw fit to end the carnage 2:06 into the first round.

Sims, always the entertainer, had tried to goad Lashley, who also works as a professional wrestler, into a World Wrestling Entertainment-style clinch to start the match. Lashley refused to engage and took Sims right to the mat as soon as he could.

“Anytime you go in there and you come out victorious,” Lashley said, “you have to be satisfied.”