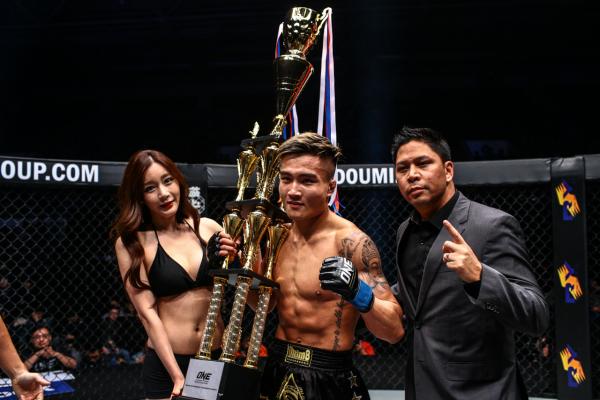 
It boasts a new Disney sponsorship, broadcasts to more than 70 countries globally, counts boxing legend Manny Pacquiao as one of its investors and promotes events around Southeast Asia, the United Arab Emirates and mainland China; and it has big plans for 2015, starting with a name change. One Fighting Championship now conducts business One Championship.

“The power of the One brand has gotten so strong that we want the focus to be on the brand as we continue to expand all over the world,” One Championship CEO Victor Cui said.

The strength of the 3-year-old company’s brand was enough to attract the attention of its newest partner: global mass media giant Disney.

“We have a fantastic relationship with Disney,” Cui said. “Blue-chip organizations all over the world realize the limitless potential that One Championship and mixed martial arts has in Asia. This is a great deal and reflects the power of One Championship in creating a spectacle that attracts the best partners.”

One Championship’s latest moves include a new broadcasting deal, which, according to Cui, will bring the Singapore-based promotion into the homes of more than 100 countries. In addition, the company has designs on holding 10 events -- the first three are already set -- in mainland China, a feat not yet accomplished by any major MMA organization.

“The expansion plan has been a huge success so far,” Cui said. “We kicked off the series in Beijing, and it was an amazing feeling to pack out the Olympic Gymnasium and watch thousands of fans cheer at the top of their lungs for their favorite athletes. This is only the beginning, and with One Championship’s continued presence in the country, mixed martial arts has the potential to become the most popular sport in the country.”

“Our champions are some of the best pound-for-pound competitors in the world,” Cui said. “You can expect to see a few new One Championship world champions this year.”

The first two events of the promotion’s 2015 campaign feature title fights. Moraes will defend his flyweight crown against Asuka Mikami at One Championship 25 on March 13 in Malaysia, and Ben Askren will put his welterweight belt on the line against Luis Santos at One Championship 26 on April 24 in the Philippines.