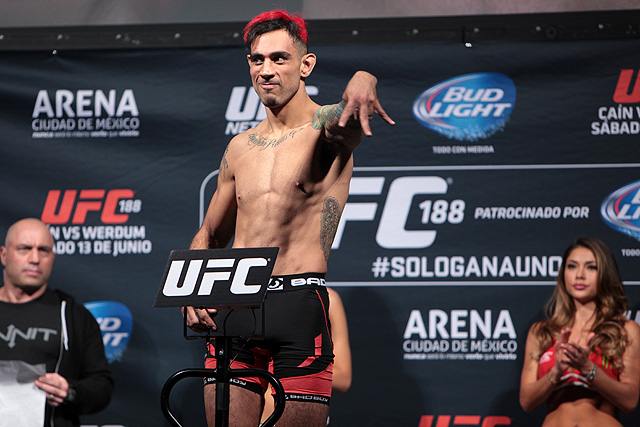 Augusto Montano is out for a year after failing a post-fight drug test. | Dave Mandel/Sherdog.com


Welterweight Augusto Montano has been suspended for one year after failing a post-fight drug test at UFC 188 on June 13.

The UFC released a statement on Friday afternoon announcing that Montano tested positive “for exogenous origin of testosterone metabolites.” His suspension is effective from the date of the event. Montano would have received a lengthier suspension, but the promotion's new anti-doping policy, which is overseen by USADA, had not yet taken effect.

UFC 188 took place at Mexico City Arena in Mexico City and saw Fabricio Werdum unify the heavyweight titles with a third-round submission of Cain Velasquez in the evening’s main event. Since Mexico City does not have an athletic commission, the event was regulated by the UFC.

A native of Mexico City, “Dodger” dropped an uneventful unanimous decision to Cathal Pendred in a preliminary 170-pound clash at UFC 188. The 30-year-old debuted in the Octagon this past November, when he earned a first-round technical knockout victory over Chris Heatherly at UFC 180 -- an event that was also held in Mexico City.

Montano is 15-2 as a professional overall, with all of his triumphs coming inside the distance.