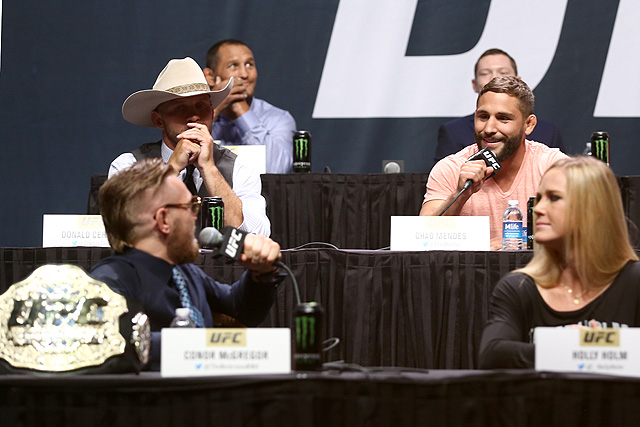 
Although they both have title fights in different weight classes looming at the end of the year, Conor McGregor and Donald Cerrone may have laid the foundation for something special in 2016.

The two stars traded barbs at Friday’s “Go Big” press conference, which was held at the MGM Grand in Las Vegas to promote the UFC’s upcoming slate for the final quarter of 2015.

While McGregor dominated the microphone in typical fashion, often interjecting when questions were posed to some of the other fighters in attendance, Cerrone more than held his own when it came time to engage in verbal warfare with “The Notorious” Irishman.

“Cowboy” took particular exception to McGregor’s boasts about making a potential move to the lightweight division should he defeat Jose Aldo in a 145-pound title unification bout at UFC 194. The Dublin native reiterated those plans on Friday.

“Conor has no right coming up to [155]. There’s no way,” Cerrone said. “He’s not gonna stand a chance. We’re too big for him; we’re too strong. So you can take your little English ass and get on.”

It was unclear whether Cerrone intentionally butchered McGregor’s nationality, but the SBG Ireland representative didn’t waste time firing back. In McGregor’s mind, virtually no one is capable of touching him -- at featherweight or lightweight.

“You’re too slow and too stiff. You’re as stiff as a board. I’d snap you in half,” McGregor said to Cerrone. “And that’s it. I see stiffness when I look in that 155-pound division. I feel like they’re stuck in the mud almost.

“The featherweights, they hit like flyweights, so it’s nice down there just destroying them and killing that whole division,” he continued. “But I have my eye on that 155 division and I see them all stuck in the mud in there. Have I been wrong yet?”

Cerrone seemed unimpressed by McGregor’s UFC resume, which includes wins over Chad Mendes, Dennis Siver, Dustin Poirier and Max Holloway. He was quick to remind his antagonist that there was some serious unfinished business on the horizon.

“You have a monster right here at 145, Aldo, about to beat your ass,” Cerrone said. “You’ve beat nobody, and you think you’re going to come up to 155 and make a statement? Come on man, sit the f--k down.”

Cerrone also addressed McGregor’s outspoken persona, which he claimed didn’t surface at all backstage as the fighters waited for the “Go Big” festivities to begin.

“He’s real good at talking out in front of the public, but when we all stand in the back he ain’t got nothing to say,” Cerrone said. “I stood back there for 30 minutes right next to him, and [he had] nothing to say to me, but he was very cordial with my man [Mendes] next to me.

“Of course we get out here he wants to run his mouth, but it’s good, you know, he sells the fights. But if he comes to 155 I’m gonna bend his little ass over.”

While McGregor still has to take care of Aldo on Dec. 12, Cerrone indeed has his own tall task to confront: a rematch against reigning lightweight king Rafael dos Anjos at UFC on Fox 17 on Dec. 19. “Cowboy” fell to dos Anjos in their first meeting, dropping a unanimous verdict at a UFC Fight Night card in August 2013.

If both McGregor and Cerrone end the year as champions, a hypothetical that has suddenly skyrocketed to the top of the MMA community’s wish list could be one step closer to reality. After Friday’s exchange, that might very well be the UFC’s next, as McGregor might put it, “money fight.”