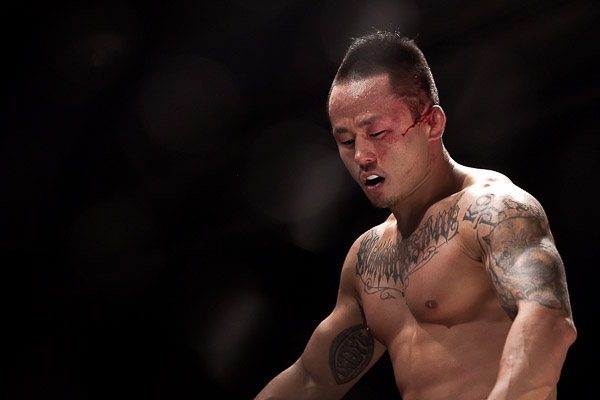 
The first fight between Joachim Hansen and Doo-Won Seo was a contender for the 2013 “Fight of the Year,” with Seo coming desperately close to forcing the Dream and Pride veteran to tap in the opening round before being submitted in the second stanza.

Their featherweight rematch headlined Road FC 15 at the Chiak Arena in Wonju, South Korea, on Saturday night, and this time Seo dispatched the Norwegian veteran almost instantly, nailing him with a hard right hand in the first exchange of the fight before finishing him with a flurry of follow-up ground-and-pound.

The end came just 15 seconds into the period, as the referee intervened to save the stricken Hansen from further punishment. With the win Seo improves to 10-7, while the former Dream champion drops to 23-12-1.

In the co-main event, age seemed to finally catch up with the 38-year-old Ikuhisa Minowa, whose lackluster performance ultimately led to a brutal knockout at the hands of unheralded Korean middleweight Jung-Gyo Park.

“Minowaman” was backpedalling frantically for virtually the entire first round, earning a warning from the referee. In the first real action of the fight, Park (2-5) narrowly missed with a spinning backfist and then connected with a hard left hand, which dropped the Japanese veteran.

The Korean moved in for the kill, but Minowa recovered and used a leg lock attempt to work his way back up. Moments later, Minowa found himself on the receiving end of another left hand, which knocked him out cold at the 4:42 mark of round one.

Minowa (59-36-8) was down for a long time and even after regaining consciousness, still needed to be stretchered out of the cage.

Elsewhere, former One FC 135-pound champion Soo-Chul Kim put in a virtuoso performance to finish three-time UFC veteran Issei Tamura with a rear-naked choke at the 2:41 mark of round one. It was the second straight win for the 22-year-old Kim, who earned an impressive TKO win over Motonobu Tezuka in his previous outing.

Kim (9-5) dropped the Japanese bantamweight with a left hand and then rolled immediately for a guillotine. Tamura (7-6) escaped but the Korean transitioned to a single leg takedown, took his back and sank in the choke to force the tap.

In featherweight action, Young-Bok Kil scored a fourth successive win, taking out Japanese journeyman Kosuke Umeda in under a round. The end came at the 4:19 mark when the Korean landed an overhand right which folded the legs of his veteran opponent.

A couple of follow-up punches finished the job to secure Gil (6-2) a stoppage victory. Umeda falls to 12-14-2 after suffering his second successive loss on a Road FC card.

In the evening’s first fight, Park Hyun Woo (1-0) prevailed in a heavyweight slugfest against Kim Jae Hun. A barrage of unanswered punches to the head of the turtled up Hun (0-1) forced the referee to stop the action at the 2:43 mark of round one.