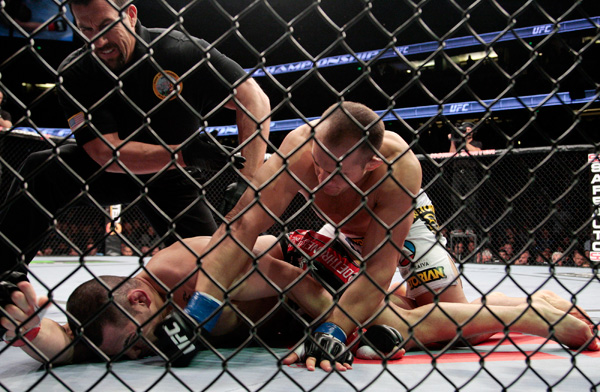 
All Junior dos Santos needed was one punch, and he landed it.

The 27-year-old Brazilian cracked Cain Velasquez with a brutal overhand right behind the ear, followed him to the canvas, finished him with a slew of strikes on the ground and captured the heavyweight crown in devastating fashion in the UFC on Fox 1 main event on Saturday at the Honda Center in Anaheim, Calif. It was over in 64 seconds.

“I have no words to say what I’m feeling,” said dos Santos, who will carry a nine-fight winning streak into his first title defense. “It’s amazing -- my life. I have a lot of good people around me. I think Cain Velasquez was for sure my toughest opponent. I was afraid to fight with him, you know, because he’s very tough. I was not 100 percent for this fight, so I was scared.”

Velasquez (9-1, 7-1 UFC), who underwent surgery to repair a torn rotator cuff in January, seemed content to keep the fight standing against the superior boxer, as he tagged dos Santos’ lead leg with kicks and exchanged when the distance between the two closed. A clubbing overhand right countered a left jab from Velasquez, put the champion on all fours and forced him to retreat to his back. He found no refuge there.

Dos Santos (14-1, 8-0 UFC) closed with patience and precision, unleashing first with lefts and ending it with hard rights to the unguarded head of his fallen foe.

“I just want to say sorry to all my fans, family and friends. I disappointed you. I’m much more than this. I will be back, and I will get that belt back,” said Velasquez, who had not fought in 13 months. “He kind of messed up my equilibrium, you know? He hit me right [on the ear]. It was a good shot. He has a lot of power. I waited too much for him. He went in and did what he was supposed to do, so my hat is off to him tonight.”