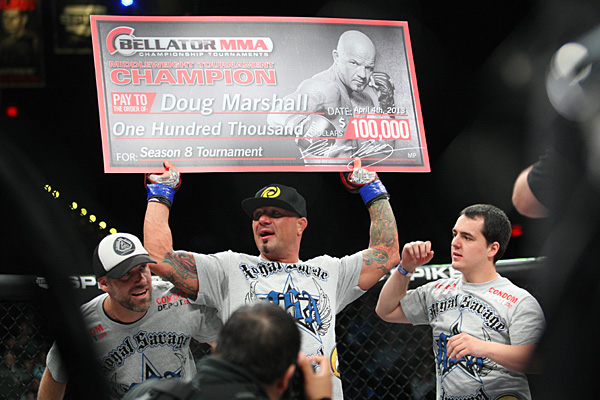 During that memorable stretch, Marshall captured the promotion’s Season 8 middleweight tournament, the $100,000 that went with it and a title shot against Alexander Shlemenko. The 37-year-old Visalia, Calif., native would suffer a first-round knockout loss to the reigning champion at Bellator 109.

By the end of it all, the hectic schedule had taken a considerable toll.

“The tournament was one of the hardest things I’ve ever had to do,” Marshall recently told Sherdog.com. “My body was beaten, broken and battered. I’m definitely not used to that kind of pace.”

While some fighters -- i.e. Donald Cerrone -- relish such activity, Marshall is admittedly thankful that Bellator is moving toward phasing out the tournament format under new President Scott Coker.

“Every fight that I fought I was injured one way or the other. Every single one,” he said. You’ve just got to want it. You’ve got to have the heart; you’ve got to have the drive. At that time, it was a $100,000 and a title shot. I wasn’t going to let that pass me up for anything.”

While no tournament means that Marshall can conceivably be healthier when he fights, Coker’s plan to put on big matchups could also lead to a quicker road back to the title for “The Rhino.”

That path begins at Bellator 125 on Friday night, when he squares off with renowned knockout artist Melvin Manhoef in the evening’s headliner at Save Mart Center in Fresno, Calif. The Bellator 125 main card begins at 9 p.m. ET/6 p.m. PT on Spike, while the preliminary bill airs on Spike.com at 7 p.m. ET/4 p.m . PT.

Marshall believes a marquee win over the man known as “No Mercy” would put him right back in the championship discussion. He also believes that Manhoef isn’t going to offer any surprises. For that matter, Marshall isn’t planning on reinventing himself, either.

“I’ve been in this game a long time; I’ve seen a lot of things,” he said. “I don’t think he can show me anything I haven’t seen. I’m not working on any trick plays or f---ing fake field goal, or any of that kind of s--t. I’m just sticking to my basics and looking to go in there and do my thing.”

With 38 knockout victories between the two of them, Marshall doesn’t see Friday’s fight going to the judges.

“I would be surprised if this gets out of the first round, either way,” he said. “We’re both going out there not holding anything back. Somebody’s getting knocked the f--k out.”

Following his loss to Shlemenko, Marshall tested positive for a banned substance and was suspended by the Pennsylvania State Athletic Commission. The middleweight declined to elaborate on that failed test.

“I’m not trying to look into the past. I’m just looking to the future and looking toward Friday night,” he said.

That philosophy also holds true as he attempts to bounce back from the knockout loss to Shlemenko. As far as Marshall is concerned, he is entering the Bellator cage against Manhoef with a clean slate.

For now, the chance to test himself against a like-minded opponent such as Manhoef is all that matters.

“I’ve heard a lot of people talking about he’s the best striker in MMA. I don’t really see it, but if he’s that guy, I want to be the guy that beats him,” he said.