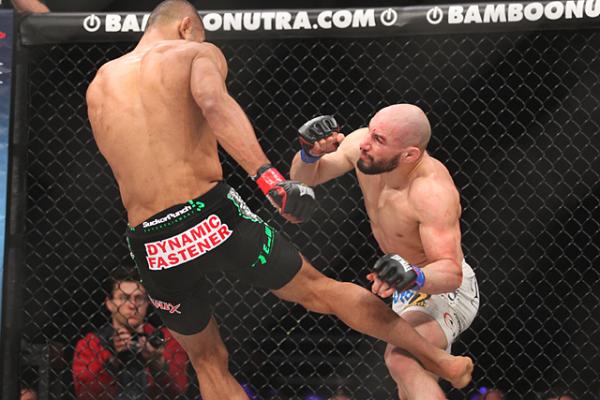 Lima captured the vacant Bellator MMA welterweight crown in spectacular fashion, forcing a second-round corner stoppage against Hawn in the Bellator 117 main event on Friday at the Mid-America Center in Council Bluffs, Iowa. Referee Rob Hinds called a halt to the bout at the request of Firas Zahabi 3:19 into round two, the Tristar Gym trainer having witnessed his fighter absorb enough damage.

Hawn (18-3, 10-3 Bellator) was on the defensive from the start, as he failed to navigate the 26-year-old Brazilian’s height and reach advantage. Operating out of an American Top Team affiliate in Atlanta, Lima (26-5, 8-1 Bellator) was surgical and methodical in his approach. One violent leg kick after another slammed into Hawn’s lead leg, leading to visible discoloration and noticeable swelling on his calf. Less than midway through the second, it was over.

“I know how dangerous Rick is, so that’s why I wasn’t rushing in to finish,” said Lima, who has rattled off 14 wins in 15 appearances. “I respect him a lot -- he’s a respectful guy -- but it was my night. It’s been a long, long road. I realized my dream.” 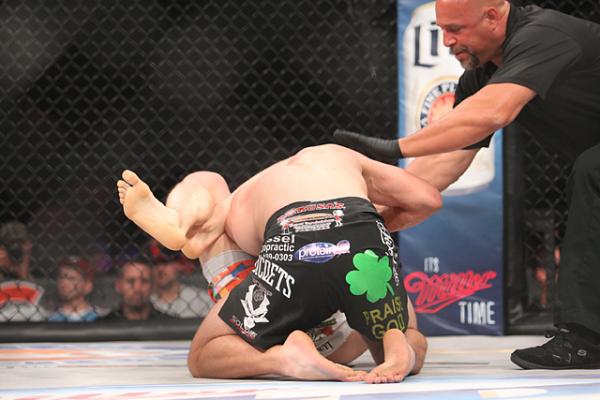 Held (18-3, 7-2 Bellator) was relentless with his trusted ground game. The 22-year-old Pole struck for a takedown inside the first minute and ran through a series of attempted leg locks. Anderson denied his advances but mounted little in the way of meaningful offense outside of some brief ground-and-pound.

The Brazilian jiu-jitsu black belt sat down Anderson with a stout left hand in the second round before ultimately pulling guard. From there, he lured the Californian into the triangle choke, a tapout following soon after. Held has won eight of his past nine bouts. 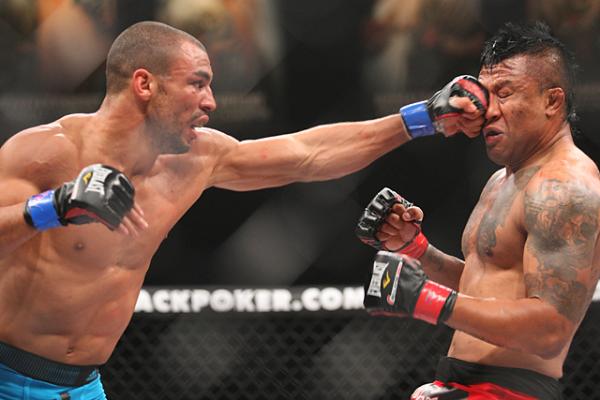 Photo: K. Mills/Sherdog.com
Ammousou slipped by Gomez.
American Top Team representative Karl Amoussou rebounded from back-to-back losses to Ben Askren and Paul Bradley, as he eked out a split decision over former King of the Cage champion David Gomez in a welterweight showcase. All three cageside judges scored it 29-28, two of them siding with Amoussou (17-6-2, 5-3 Bellator).

Gomez (16-8, 0-1 Bellator) had his moments, as he staggered the Frenchman with clean power punches in the first and second rounds. However, Amoussou was the busier striker and more diverse fighter over the duration of their 15-minute encounter.

The judo black belt threatened Gomez with a heel hook in round two and utilized his polished clinch game in round three, piling up points with close-quarters punches and knees to the body and legs. 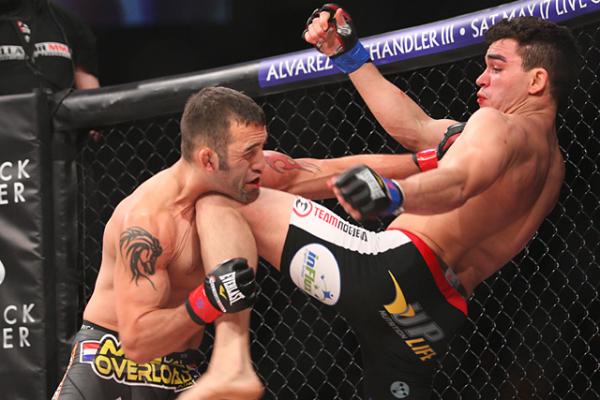 Campos (14-4, 3-2 Bellator) could not sustain the momentum he established in round one, where he threw and landed more often, kept his fists in the Brazilian’s face and chopped at his legs with intermittent kicks.

“Pitbull” floored the Texan with a short left roughly 10 seconds into the second round and leveled him again with a wicked overhand right before transitioning to his back for the stoppage.

The loss snapped a five-fight winning streak for Campos. 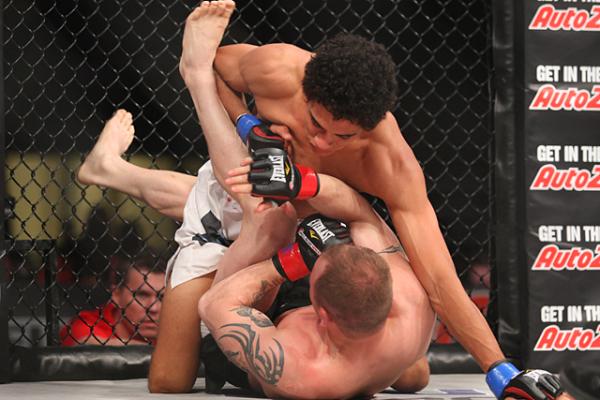 Photo: K. Mills/Sherdog.com
Neves stopped Arocho with a steady attack.
In preliminary action, undefeated Brazilian prospect Julio Cesar Neves Jr. (29-0, 1-0 Bellator) stopped Josh Arocho (13-13, 0-2 Bellator) on a series of unanswered elbow strikes and punches 2:37 into the second round of their 150-pound catchweight affair; UFC veteran Houston Alexander (16-10, 1-1 Bellator) stopped Matt Uhde (3-5, 0-3 Bellator) on a technical knockout in between the second and third rounds of their light heavyweight matchup; Jackson-Wink MMA export Ryan Jensen (20-8, 1-0 Bellator) submitted Mark Stoddard (8-7, 0-1 Bellator) with an arm-triangle choke 3:52 into round one of their 175-pound catchweight bout; LaRue Burley (4-0, 2-0 Bellator) kept his perfect professional record intact with a unanimous decision over Cliff Wright (8-6, 2-4 Bellator) in their lightweight battle, sweeping the scorecards with 29-27, 29-28 and 29-27 marks; Joe Vedepo (15-8, 2-2 Bellator) defeated Ben Crowder (10-12, 0-1 Bellator) by verbal submission after a takedown resulted in a gruesome injury to the Iowan’s right knee 48 seconds into the first round of their 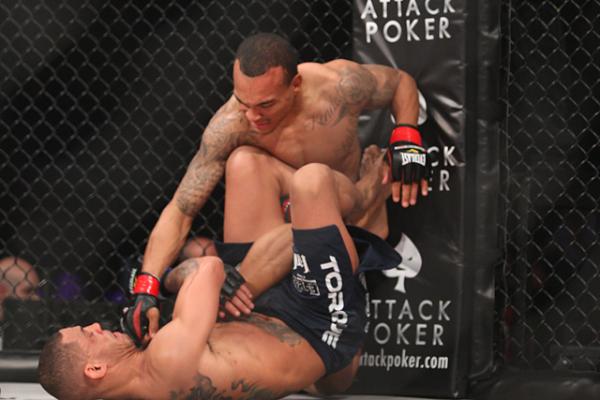 Photo: K. Mills/Sherdog.com
Burley dominated after the first round.
middleweight tilt; Anthony Smith (18-11, 1-0 Bellator) submitted Victor Moreno (32-20, 0-1 Bellator) with a triangle choke 52 seconds into round two of their clash at 185 pounds; Martin Brown (5-2, 1-1 Bellator) captured a unanimous verdict from Jared Downing (9-5, 2-3 Bellator) in their duel at 155 pounds, earning 29-28, 30-27 and 30-27 nods from the cageside judges; and onetime Championship Fighting Alliance titleholder Jordan Parsons (10-1, 1-0 Bellator) knocked out journeyman Tim Bazer (14-16, 0-1 Bellator) with a two-punch combination four seconds into the second round of their lightweight scrap.