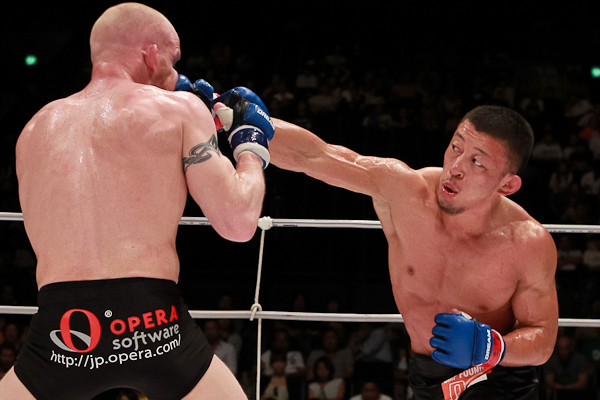 Once regarded as one of the world’s best lightweight, Kawajiri made the cut to featherweight in 2011 following failed title bids against Aoki and Strikeforce ruler Gilbert Melendez. “Crusher” has since gone undefeated, earning a trio of submission victories in his last three fights. The 34-year-old closed out last year with victories in the Dream ring over Joachim Hansen and Kazuyuki Miyata and followed those performances with a win over King of the Cage titlist Donald Sanchez this past March at One FC 3.

Omigawa, 36, has lost four of his last five and recently received his UFC release following back-to-back losses to Iuri Alcantara and Manny Gamburyan. Following an ill-fated two-fight stint as a UFC lightweight from 2007 to 2008, “Michi” rejoined the Las Vegas-based promotion last year after earning eight wins in nine fights outside the organization as a featherweight. The Japanese talent dropped consecutive bouts to begin his UFC career before picking up his lone Octagon win in his third appearance, outpointing Jason Young at UFC 138 last year.