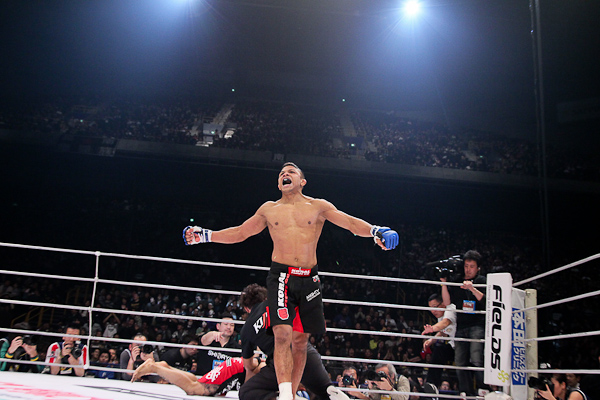 It looks like Bibiano Fernandes is not going to be a UFC employee after all.

Just a week after it was announced that the former Dream two-division champion would make his Octagon debut against Roland Delorme at UFC 149 in Calgary, Alberta, the promotion confirmed on Monday that Fernandes would not be competing on the card.


Advertisement
The Brazilian jiu-jitsu ace wrote on his Facebook page that while negotiations with the UFC did take place, he was not able to come to terms with MMA’s largest organization.

"I would like to make perfectly clear the news concerning my involvement with the UFC," Fernandes wrote. “It was announced that I, Bibiano Fernandes, have been contracted to fight for the organization at UFC 149, which will take place in the city of Calgary on the 21st of July. I would like to make it clear that I am not a UFC athlete, as I did not sign any contract with the UFC organization. Negotiations between the UFC and myself did take place, however, we could not resolve the issues on the table and as a result, we did not come to an agreement.

"I did not find the terms set before me by the UFC beneficial to my family and as a result an agreement could not be reached and no contract was signed," Fernandes continued. "It should be noted that the UFC is the largest MMA organization in the world. However, my personal and professional obligations have brought me to the decision that I will not be a part of the UFC organization at this point in time."

MMAFighting.com has reported that Fernandes has been offered a better contract by the Singapore-based One Fighting Championship. A replacement opponent for Delorme has yet to be announced.

It is the latest in a long list of withdrawals for the July 21 event, which was originally scheduled to be headlined by a featherweight title clash between Jose Aldo and Erik Koch until the champion pulled out of the bout due to injury. Instead, an interim bantamweight championship bout between Urijah Faber and Renan Pegado was moved from UFC 148 to take its place as the main event. The card has also lost the likes of Mauricio Rua, Thiago Silva, Thiago Alves, Michael Bisping and Yoshihiro Akiyama for various reasons.

A competitor on Season 14 of “The Ultimate Fighter,” Delorme has defeated Josh Ferguson and Nick Denis -- both via rear-naked choke -- in his two UFC appearances.