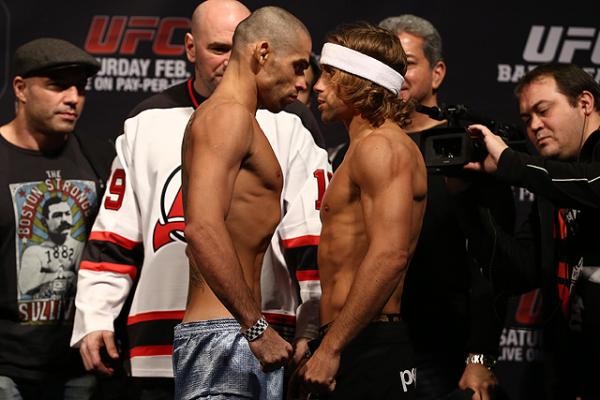 “I thought the stoppage was a little bit premature,” Ludwig told the Sherdog Radio Network’s “Beatdown” show. “Urijah was in trouble before that, but he was intelligently defending himself obviously with the thumb’s up. But we all make mistakes; it happens. I just think it was a mistake by Herb.”

Barao hurt Faber early and floored him again before following up with hammerfists on the ground. In Ludwig’s view, however, Faber was still defending himself intelligently when Dean stepped in.

“He was,” Ludwig said. “There wasn’t much more he could have done. One arm was trapped. The arm that was trapped, he was giving the freakin’ thumb’s up, but maybe Herb didn’t see that. Obviously he didn’t see that, and with the other arm he was defending himself. I think obviously [Dean] made a bad call and I think he’ll tell you that himself after looking at it.”

Faber has had an impressive career, but he’s struggled in title bouts, losing his last six. Some fans may not be eager to see him get another title shot, but Ludwig doesn’t think Saturday’s matchup should be held against him.

“He didn’t really lose this time, though,” Ludwig said. “It was a bad stoppage. If he went out there and got dominated and got his ass beat or got submitted or got stopped, like knocked out cold or the referee didn’t pull him away when he should have stopped the fight, then you’d have a valid point, but right now you don’t have a valid point because he lost to him the first [time] in a very close fight, a decision. This time it was a premature stoppage -- everybody agrees. Because of this point in particular, the way it was stopped, there should be a third fight.”

Ludwig believes it will happen, too.

“I don’t think Urijah even needs to have another fight to go back to Barao,” he said. “I think they should redo it, but of course I’m not the promoter. I’m not the one dealing with the P.R. relations and such, so I think what they would like to do is have Urijah do one more fight, maybe do one more fight, maybe in the summer or so, or maybe in the spring or something, do another fight, get a win and then fight Barao again in the summer.”