Jorge Gurgel dropped to 2-3 inside the Strikeforce cage, as Joe Duarte earned a unanimous decision over the Brazilian jiu-jitsu black belt in the “Challengers 18” headliner Friday night at The Pearl in Las Vegas.

Gurgel struggled in the wrestling department and spent lots of energy trying to take his opponent down through the first two rounds. Sporting a busted nose, the Ohio-based fighter got more aggressive as the fight went on but was unable to establish a rhythm or find comfort while exchanging blows or dropping levels.

Duarte (10-2), fighting out of Southern California’s “The Arena,” sealed the fight with a third-round takedown following a failed trip attempt by Gurgel. The Brazilian went for an outside trip and Duarte cleared the hips to land directly in the mount.

This error and another takedown with 30 seconds remaining cost Gurgel (14-8) the bout, as judges Tony Weeks and Junichiro Kamijo saw it 29-28, while Patricia Morse-Jarman had it 30-27 for the San Diego native.

Nate James outhustled Danillo Villefort en route to a unanimous decision following a back-and-fourth middleweight contest that saw the victor work primarily from the top while the veteran with major-league experience had near finishes but couldn’t put away his up-and-coming challenger.

Villefort (13-4) found the back of his American Kickboxing Academy opponent in round one and locked up a guillotine in the final stanza. Despite coming close, the Floridian was forced to play the guard game for much of the bout and the judges penalized him for it. 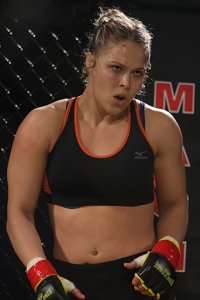 Ronda Rousey
Rousey is going to be a special athlete.
The event’s lone women’s bout saw controversy unfold, as Olympic judoka Ronda Rousey dispatched Sarah D'Alelio with an armbar at 0:25 of the first.

Rousey, a native of Venice, Calif., jumped for the armbar in a standing position and secured a tight hold on the elbow. D’Alelio (4-2) appeared to yelp slightly, and the Team Hayastan athlete let go of the limb and told referee Steve Mazzagatti that her opponent had verbally submitted. In her postfight interview, the Olympia, Wash., resident denied doing such, saying she only slightly verbally acknowledged the hold.

Regardless, Rousey moved to 3-0 with the win, with all three victories coming by way of first-round armbar inside of one minute.

The seasoned UFC and International Fight League veteran had little trouble taking down his Team Conquest foe, who attacked from the bottom with a bevy of submissions but was unable to cinch a tapout-inducing catch. Healy (25-16), of St. Louis, controlled from the top for nearly the entire 15 minutes of action on his way to the judges’ nod. Official scores and judge identities were not made public.

In the evening’s first televised bout, Derrick Mehmen survived a vicious cut above his left eye from a spinning-back kick to seize a unanimous decision from an electric Roy Jones.

Mehman (12-3) was tagged by a flying knee and several punches in the first period, which caused his left eye to nearly close by the time the first five minutes had passed. As the horn signaled the start of round two, Jones’ right heel appeared to open the swollen mass above the American Top Team representative’s eye, causing a torrent of vital fluid to pour onto the canvas. The cut was checked by a ringside physician on referee Herb Dean’s orders, but the fight was allowed to continue.

The Cedar Rapids, Iowa, native controlled Jones (6-2) for the duration of the bout with tight positioning on the floor, where he scored enough to outpoint the Imperial Athletics fighter. Judges’ names and scores were not announced.