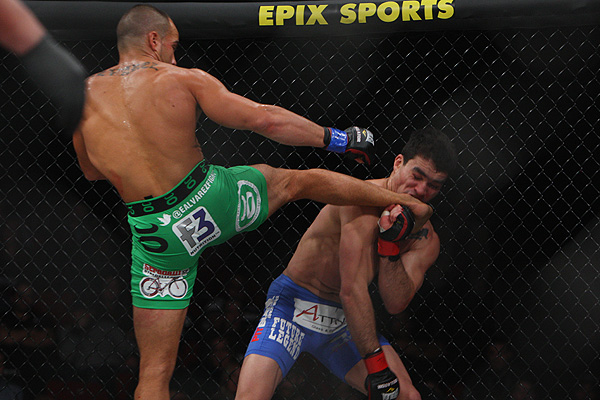 If this was indeed Eddie Alvarez’s final appearance under the Bellator Fighting Championships banner, he certainly went out with a bang.

Alvarez knocked out Patricky “Pitbull” Freire with a first-round head kick in the Bellator 76 main event on Friday at Caesars Windsor Hotel and Casino in Windsor, Ontario, Canada. Freire (10-4, 3-3 Bellator) lay unconscious at the base of the cage 4:54 into round one, as Alvarez scaled the cage, embraced his wife and ran into the stands in celebration.

“I have a lot of respect for ‘Pitbull,’” Alvarez said. “You had two of the most exciting lightweights in the world in the cage here tonight.”

Before the decisive finish, the headliners authored one of the year’s most memorable rounds. Alvarez floored the Brazilian with a savage left hook early on and followed him to the mat with a right hand. “Pitbull” was quick to answer, as he returned to his feet and put Alvarez on his heels with crisp right hand behind the ear. The American clinched to recover, and the two men eventually separated.

With round one nearing its close, Alvarez (24-3, 8-1 Bellator) backed Friere into the cage and, with the Team Nogueira export leaning to his right, threw a Louisville Slugger head kick that sent his opponent crashing to the canvas. A volley of right hands punctuated the victory, Alvarez’s ninth win in his last 10 appearances.

“The goal never changes,” said Alvarez, who is believed to be headed to the UFC. “It’s about beating the guy in front of you. That’s what I’m here for.” Martinez established his foothold in the grueling battle with a consistent left cross, which had Malegarie (22-3, 1-3 Bellator) bleeding heavily from the nose and mouth midway through round one. The Argentinian’s vaunted submission game was never a factor, as Martinez tagged him with punches and struck for takedowns at the end of rounds one and three.

“I feel a little roughed up, but winning that fight has me feeling a lot better,” Martinez said. “This tournament is the toughest in the world. If you get to where you fight the champion, you’ve definitely earned it.” D. Mandel
Fabiano caught that arm.
Former International Fight League champion and WEC veteran Wagnney Fabiano submitted Akop Stepanyan with a first-round armbar in the Bellator Season 7 featherweight tournament quarterfinals. Stepanyan (12-4, 0-1 Bellator) tapped out 3:24 into round one, his 12-fight winning streak a thing of the past.

Fabiano (15-3, 1-0 Bellator) struck for a takedown roughly 90 seconds into the match, moved to side control and eventually set up shop in full mount. The Brazilian jiu-jitsu black belt then transitioned beautifully to the armbar. Stepanyan put up an admirable struggle, but his arm eventually bent beyond its bounds.


Mike Richman needed less than half a minute to take out Jeremy Spoon in the Bellator Season 7 featherweight tournament quarterfinals, as he knocked out the Oklahoman with a head kick 23 seconds into round one.

After a brief exchange on the feet, Richman belted Spoon (12-2, 2-2 Bellator) with the head kick and followed his stunned prey to the canvas, finishing him with a pair of standing-to-ground punches. The 27-year-old Richman (13-1, 2-0 Bellator) has won four consecutive fights, three of them inside one round.

“That’s kind of one of my specialties in the gym,” said Richman, who trains under Greg Nelson at The Academy in Minnesota. “I’ve got a sneaky high kick.” Shamhalaev (10-1-1, 1-0 Bellator) capitalized on a Bollinger slip, pounced on the American and delivered some hellish ground-and-pound from inside guard. His shots to the body were of particular interest. Bollinger eventually folded under duress; he turned his back and absorbed a series of unanswered blows that brought the bout to a close.