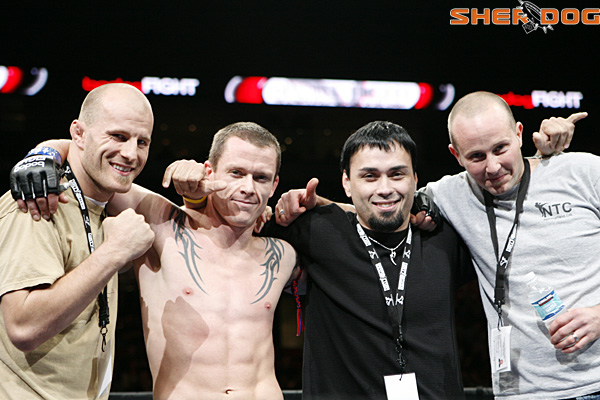 Eddie Bravo (second from right) has made peace with Ralek Gracie. | Chris Ryan/Sherdog.com


Eddie Bravo has laid relatively low since competing against Royler Gracie at Metamoris 3 in March.

The enthralling rematch of the Abu Dhabi Combat Club grappling tournament in 2003 ended in a 20-minute draw, but it was reports that came out following the event that really caught the combat sports world’s attention.

After the bout, the 10th Planet Jiu-Jitsu creator appeared to be at odds with Metamoris founder Ralek Gracie. Bravo wasn’t exactly pleased with some of Gracie’s comments after the fact and claimed that the event founder would not return his texts. In addition, Bravo’s post-match confrontation with Royce Gracie drew plenty of attention. However, all of that is water under the bridge now -- at least where it concerns Bravo and Ralek Gracie.

In an interview with Sherdog.com, Bravo attempted to explain the feud.

“I ended up doing my own show -- the Eddie Bravo Invitational. Now I understand, being the owner of the show, that I am in the exact same position Ralek is in. I mean Royler [Gracie] is his uncle, so he had to do some stuff, and above all else he is a part of a family. I mean, family comes first right?” Bravo said.

“So I get it now that I have my own show. I feel where Ralek is coming from because if I let my heart run everything, half of the show would be making 10th Planet look like we were kings of the world,” he continued. “But then no one would take me seriously; I have to be 100 percent unbiased. Your heart wants to just promote the hell out of your family. My family is 10th Planet; Ralek’s is the Gracie family, so I am not as hurt as I was initially.”

The prior issues didn’t prevent Gracie from reaching out to Bravo as recently as April 6 to compete at Metamoris 4 in Los Angeles on Aug. 9.

While Bravo declined the invitation to compete, the decision doesn’t stem from any animosity. Instead, it is purely so the 44-year-old can focus on other aspects of his life.

Relations between Bravo and Ralek have since been smoothed over, but the same cannot be said about his relationship with UFC Hall of Famer Royce Gracie.

Following Metamoris 3, Royce Gracie approached Bravo and told him that while he appreciated Bravo's kind comments made to the family after the event, he was still upset with the amount of trash talk directed at the Gracie family during the card’s buildup.

The remarks ultimately led to a shouting match that required the two to be separated by Jean Jacques Machado. Since the altercation, the two have not been in contact.

“I would love for there to be peace between him and I. But if he doesn’t want a peaceful resolution and wants to keep being angry at me for whatever reason, that’s fine too,” Bravo said. “Royce definitely has the personality that I could never get along with. I know what kind of person he is. I wouldn’t be able to hang out with him anyway. He is a legend; I will always respect him for that. If he wants to do a grappling match someday, I am down for that too.”

Bravo likes the card Ralek has put together for Metamoris 4, which will be headlined by Chael Sonnen and Andre Galvao. The trend of utilizing mixed martial arts fighters as special attractions is something Bravo could definitely see himself experimenting with for his own tournament.

“I think it’s a great idea,” Bravo said. “It’s kind of like Pride using pro wrestling to blow up MMA in Japan. MMA is the hottest sport in the United States. It’s smart of Metamoris to use MMA grapplers. I would do the same for [The Eddie Bravo Invitational] in a heartbeat.”

The Metamoris 3 headliner believes Galvao will defeat Sonnen on Aug 9.

“I think I would put my money on Galvao. He is just too much of a beast; he’s too good,” Bravo said. “If Galvao doesn’t submit Chael, I think he will have the better of him positionally. He might not be able to finish Chael because Chael’s a lot bigger than him, but I am going with Galvao.”

The Brazilian jiu-jitsu practitioner’s inaugural tournament in June went off without a hitch. Bravo said the event was such a success that he is already knee-deep in plans for the next one.

“We are shooting for the next event at the end of September,” Bravo said. “The next show is going to be 135 and 155 pounds. It’s going to be in Hollywood again.”