Solidifying himself as the kryptonite to Penn’s lightweight Superman, Edgar retained his 155-pound championship with a near flawless performance in the UFC 118 “Edgar vs. Penn 2” headliner on Saturday at the TD Garden in Boston. Edgar swept the scorecards from all three judges in a unanimous verdict: 50-45, 50-45 and 50-45.

“I feel like I can walk on water,” Edgar said

Edgar scored with two- and three-punch combinations throughout the fight, delivered strong takedowns in the first and second rounds and dominated the revered Hawaiian in virtually every phase of the sport. Penn was visibly frustrated after the first five minutes, and his situation did not improve.

“Frankie fought a great fight. He’s the man,” Penn said. “I’ve got nothing bad to say. He fought me twice. He walked away with the decision twice. What can you say? It looked like the same kind of fight as last time. He got off good. Much respect. I’ve really got to go back and think about things.”

Edgar made one mistake in the 25-minute match, as he left himself open for a takedown inside the first 15 seconds of round four. The champion returned to his feet, however, and resumed picking apart Penn with punches. Penn delivered another takedown in the fifth round and threatened to take back control, only to have the relentless Toms River, N.J., native reverse into top position during a scramble. Some nice ground-and-pound punctuated the victory, Edgar’s fifth in a row.

Their first encounter at UFC 112 in April -- which also went to Edgar in a unanimous decision -- was clouded by controversy. The rematch was not.

“First, I want to thank B.J. He really brought out the best of me,” Edgar said. “I knew he was going to come in tough again. It was close the first time. I just wanted to make that point.” 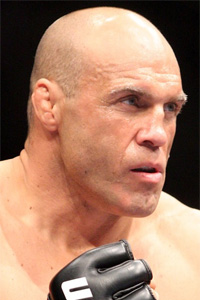 Couture dropped levels for a single-leg takedown inside the first 30 seconds, put Toney on his back and moved immediately to mount. From there, the finish was academic. Punches from the top softened the boxer for the choke near the cage. After a brief readjustment, Couture locked up the choke, passed to the side and waited for the tapout.

“This is exactly what we trained to do,” Couture said. “No one really shoots a low single in MMA. I knew with James’ boxing stance a low single would probably be there, and it worked. I’ve worked on that arm-triangle for over a year now, so to finally get it, it was awesome.”

The 47-year-old Couture had some words of wisdom for his latest victim.

“I think, realistically, even if he’s been training nine months, that’s real short order to pick up everything he needed to know for mixed martial arts,” he said. “I’m a huge fan of boxing. A lot of credit to James for stepping up in here. He’s the first boxer to do that. I think all of us MMA guys love boxing, and hopefully, now, there’s a whole bunch of boxers like James that will start to love MMA.”

“I didn’t expect him to be so aggressive at first,” he said. “He just caught me. He got me on the ground, and I couldn’t get out of the triangle choke. But I’ll be back. I ain’t no quitter.”

Maia secured five takedowns in the match and mounted Miranda in the second and third rounds. He came close to nailing down armbars twice, but Miranda, despite his fatigued state, escaped each time. Maia closed out the win in round three with a pair of takedowns, moving to the full mount as the bout approached the final minute.

A two-time Brazilian jiu-jitsu world champion, Maia tried his best to finish it, but Miranda refused to be taken.

File Photo
Maynard cruised past Florian.
Gray Maynard boxed effectively and grounded Kenny Florian repeatedly, as he won a unanimous decision, remained unbeaten and cemented his place as the top contender in the lightweight division. Scores were 30-27, 30-27 and 29-28.

“I’m really glad to finally get to the spot where I have a chance at the belt,” Maynard said. “Love me or hate me, I work my ass off.”

After a competitive opening period, Maynard cut Florian near his left eye with a second-round punch, took down the two-time title challenger with a little more than two minutes left and dropped some of his patented ground-and-pound. Round three followed a similar pattern, as the Xtreme Couture Mixed Martial Arts thoroughbred again took Florian off his feet and attacked with punches from inside his guard. Florian, growing more desperate by the minute, tried to reverse position with an omaplata, but Maynard kept his composure, calmly freed himself and cinched his eighth straight win.

An accumulation of heavy, accurate punches carried Nate Diaz to his third victory in four appearances, as “The Ultimate Fighter 5” winner submitted Marcus Davis with a third-round guillotine choke in a featured welterweight duel. The end came 4:02 into round three.

Diaz peppered Davis with a relentless stream of punches throughout the match, as the Cesar Gracie protégé opened a pair of cuts near his opponent’s right eye, including a nasty gash on the eyelid. By the time the third round arrived, Davis’ face was grotesquely swollen. Diaz secured top position and locked in a tight guillotine choke, leaving Davis unconscious against the cage.

“I think I broke my hand in the second round,” said Diaz, who left the door open to a possible return to the 155-pound division. “I want to go back and fight those tough guy wannabees down there at 155 -- Maynard and all those who think they’re hot shots.”