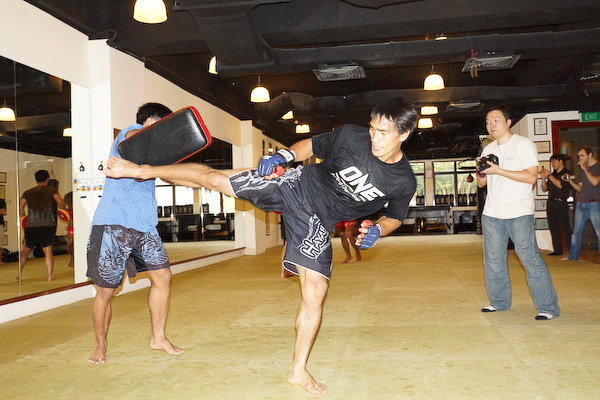 If Eduard Folayang is feeling any pressure ahead of his third One Fighting Championship appearance, he certainly isn’t showing it.

A native of the Philippines and reigning Universal Reality Combat Championship welterweight titlist, Folayang now finds himself fighting on home soil in the co-headlining slot of One FC 5. The event marks the Singapore-based promotion’s inaugural trip to Folayang’s homeland and takes place Friday at the Smart Araneta Coliseum in Manila.

“I am so happy to be fighting in my home country. My skill was developed here, and one way of giving back to Filipino people is to showcase my talent here in my home country,” Folayang recently told Sherdog.com “It is an honor, and I am very grateful to sir Victor Cui and to One FC for giving me the opportunity to fight in front of my fellow Filipinos.”

Folayang will compete on the evening’s live pay-per-view stream against Swiss competitor Felipe Enomoto. Though Enomoto has lost three of his last four bouts, he notably submitted kickboxing veteran Ole Laursen, the man who handed Folayang his first One FC defeat via split decision on March 31.

“Enomoto is a good fighter, and I am expecting an all-out war. I do not think he will be afraid to keep the fight standing, and I know he will not back down. Both my fights for ONE FC have been ‘Fight of the Night,’ and I predict [the same for] this fight,” said Folayang. “I am ready to go toe-to-toe with Felipe for three rounds. If I can finish the fight before that, then I will, but he is a very tough opponent. I want to show my skills in striking, but if it something different happens, I am prepared for anywhere the fight goes.”

Though the 27-year-old has fought nearly half of his professional career on home soil, his upcoming bout with Enomoto nonetheless serves as a special occasion simply due to the platform on which he will compete. Folayang now faces Enomoto at the same venue in which Muhammad Ali bested Joe Frazier in their brutal third encounter back in 1975, dubbed “The Thrilla in Manilla.”

“I am very proud to represent the Philippines. A lot of people here like MMA, and they see my fights on ESPN Star Sports, but this is the first time One FC is coming to the Philippines,” said Folayang. “I am happy that people can see me fight for One FC in the arena and not just on TV.”

Friday’s contest marks arguably the most pivotal moment in Folayang’s career thus far, as the fighter looks to avoid suffering back-to-back defeats for the first time. Though just a five-year pro in MMA, Folayang has spent a total of 11 years honing his martial arts skills to reach his current heights.

“I started kickboxing when I was 16 years old, and after that I transitioned into Wushu and became national champ and won three medals at the Southeast Asian Games,” said Folayang. “In 2011, in Jakarta, Indonesia, I won the gold medal with a spinning back kick knockout in the final. I would like to finish a fight like that in MMA. It would be a good feeling.”

Though Folayang says he is completely focused on Friday’s confrontation with Enomoto, the lightweight hopes that this bout will serve as a step toward his ultimate goal of becoming One FC champion while inspiring other Filipinos to become mixed martial artists.

“I am very happy with One FC, because it is the biggest promotion in Asia and because it gives me the opportunity to fight in front of so many fans in Manila. My focus is to become champion of One FC. That is my dream, and that is my goal,” said Folayang. “If young Filipinos have the talent and the heart to try this sport, then why not try it? I hope I can be a good example to young Filipinos, and if they decide to learn martial arts because of me, I will be happy about that.”