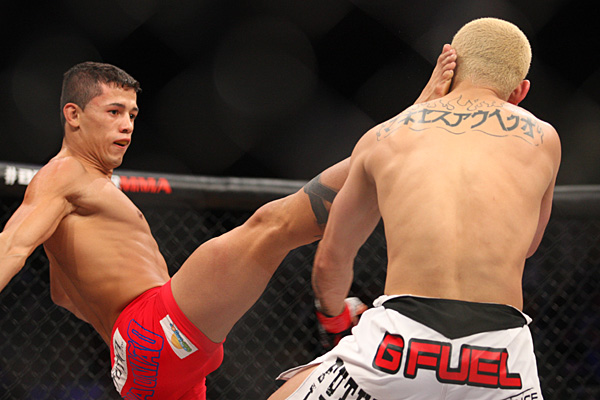 
Eduardo Dantas temporarily put brotherhood aside to defend his Bellator bantamweight title on Thursday night, and the results were spectacular.

Competing for the first time since a surprising loss to Tyson Nam at a Shooto event this past August, Dantas (15-3, 5-0 Bellator) starched Nova Uniao stablemate Marcos Galvao (13-6-1, 4-3 Bellator) in the Bellator 89 headliner at the Bojangles Coliseum in Charlotte, N.C. A brilliant right uppercut from the champion snapped Galvao’s head back and sent the 31-year-old Brazilian to the canvas. With Galvao flat on his back, Dantas finished the job with three rapid-fire hammerfists on the ground at the 3:03 mark of round two.

The exuberance of victory rapidly shifted to concern for his training partner, and Dantas wept openly in the cage after finishing Galvao.

“I’m sad and happy,” Dantas said through a translator. “Sad because I had to fight my friend, and happy to still be champion of Bellator.”

It quickly became apparent that Galvao, the promotion’s Season 6 bantamweight tournament winner, had no answer for the quick, precise striking of his opponent. Showing a great deal of respect for the challenger’s power, Dantas landed his piston-like left jab with regularity in the opening frame.

“Dudu” continued his assault in round two, and he looked to have Galvao reeling from a head kick early in the frame. “Loro” recovered and somehow managed to brawl his way out of danger. It proved to be only a temporary reprieve, however, as Dantas responded with a crisp spinning back kick before connecting with what proved to be the fight-ending uppercut. Photo: K. Mills/Sherdog.com
Cramer outpointed Rogers to advance.
Dan Cramer (9-3, 7-1 Bellator) battled to a hard-fought unanimous decision over a game Brian Rogers (10-5, 3-3 Bellator) to claim his place in the promotion’s middleweight round of four. Judges T.Y. Evans and Stephen Elliott scored the bout 29-28, while Andrew Hopper Jr. had it 30-27 -- all in favor of the American Top Team representative.

Both fighters threw heavy leather throughout the back-and-forth affair. A stout lead right hand and takedowns set the tone for Cramer in round one, but “The Professional Predator” returned fire in the second frame, executing a pair of throws and punctuating each with a furious volley of hammerfists.

Cramer regained the momentum in round three by landing a knee to Rogers’ jaw from the Thai plum. “Cosmo” was able to follow up with some effective strikes on the mat, but Rogers wasn’t quite done. The Ohioan returned to his feet, and attacked with a flying knee and powerful punches to wobble his foe. It would not be enough, however, as an exhausted Rogers failed on another throw attempt, and Cramer finished the bout in top position. The Kings MMA product was tenacious throughout the contest, but he really began to assert himself in the second frame, dropping Paraisy (10-3-1, 0-3 Bellator) with an uppercut to begin the round. While Cooper was unable to finish the resilient Frenchman, he maintained control for the rest of the bout with slams, takedowns and relentless ground-and-pound.

Paraisy’s most significant offense came in round one, as he was able to consistently return to his feet after being taken down and land some solid knees, kicks and punches. However, he was unable to maintain that pace as Cooper rolled to his fifth consecutive victory. Photo: K. Mills/Sherdog.com
Marshall clipped Spang in round one.
Doug Marshall needed just one punch to announce himself as a force to be reckoned with in Bellator’s Season 8 middleweight bracket.

Marshall (16-6, 2-0 Bellator) connected with a big right hand to the chin that sent Andreas Spang (8-2, 1-2 Bellator) spinning to the canvas in the opening round of their middleweight quarterfinal. Sensing his night’s work was done, Marshall turned his back on his fallen foe, and moments later referee Dan Miragliotta stepped in to call a halt to the contest, giving Marshall his 11th career triumph via knockout 3:03 into the opening frame.

“I felt it solid. It was a great punch … the bottom line is: you mess with ‘The Rhino’ and you get the horn,” said Marshall, who found a home for his right hand throughout the short-lived encounter. “I think I sent out a message [to the rest of the middleweight division] that they better work on their wrestling and just leave the striking to me.”