Emanuel Newton needs only a small window of opportunity to change the course of a fight.

Newton knocked out Joey Beltran with an exquisite spinning backfist to retain the Bellator MMA light heavyweight championship in the Bellator 124 main event on Friday at the Compuware Arena in Plymouth Township, Mich. Beltran (15-11, 1-2 Bellator) met his end -- and it was as decisive as they come -- 3:07 into round three.

For the better part of three rounds, Newton (24-7-1, 7-1 Bellator) struggled to establish a rhythm. Beltran crowded the champion in close quarters, piling up punches in the clinch. In the third round, the challenger pressed forward with punches and walked Newton toward the cage, only to be met with a lightning strike of a spinning back fist. An unconscious Beltran collapsed face first to the canvas, his bid to spring the upset halted in a blink. 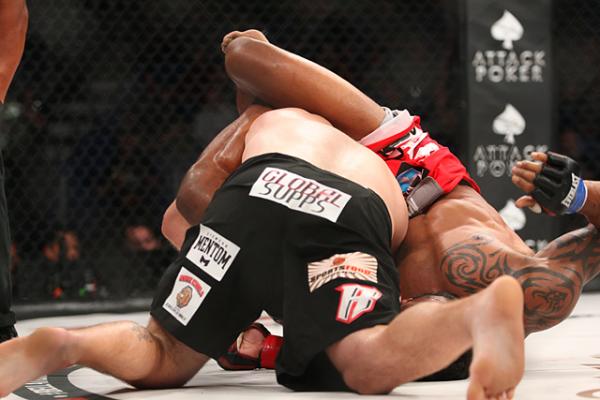 (+ Enlarge) | Photo: Keith Mills/Sherdog.com
McGeary's submission was incredible.
Liam McGeary submitted American Top Team’s Kelly Anundson with a first-round inverted triangle choke from underneath side control in the 2014 Bellator Summer Series light heavyweight tournament final. Anundson (9-3, 3-1 Bellator) asked out of the match 4:47 into round one.

McGeary (9-0, 6-0 Bellator) met the 30-year-old’s initial takedown attempt with a knee strike to the face, a strong sprawl and some heavy ground-and-pound. However, after being allowed to return to his feet, Anundson again closed the distance on the 6-foot-6 Englishman and secured a takedown soon after. McGeary remained hyperactive from the bottom, even as he was eating elbows from the top, as he threatened the American wrestler with repeated keylocks that had him wincing in pain. Eventually, the Renzo Gracie protégé snaked his legs around the unsuspecting Anundson’s neck, corkscrewed his body to tighten the choke and elicited the tapout.


L.C. Davis leaned on takedowns, a stifling top game and occasional ground-and-pound in pocketing a one-sided unanimous decision over Nova Uniao’s Zeilton Rodrigues in a featured bantamweight contest. Davis (22-6, 2-0 Bellator) swept the scorecards with 30-27s across the board, winning for the sixth time in seven appearances.

Outside of a few futile leg lock attempts and a successful takedown late in the third round, Rodrigues (12-4, 0-1 Bellator) was a non-factor. Davis, who operates out of an American Top Team affiliate in Kansas City, Mo., delivered takedowns in all three rounds and neutralized the Brazilian from top position, peppering him with fists, forearms and elbows.


Strikeforce and Ultimate Fighting Championship veteran Ryan Couture made a successful Bellator debut, as he submitted Tommy Bagnasco with a first-round rear-naked choke in their lightweight showcase. A short-notice replacement for John Schulz, Bagnasco (3-3, 0-1 Bellator) conceded defeat 3:01 into round one.

Couture (9-3, 1-0 Bellator) was methodical and efficient. The 32-year-old son of UFC hall of famer Randy Couture, he punched into clinch range, executed a takedown and settled into side control. Couture then transitioned between the underdog’s back and full mount, softening his counterpart with ground-and-pound. Bagnasco ultimately left his neck exposed for the fight-ending choke.

Couture has rattle off three consecutive victories, all of them via rear-naked choke.