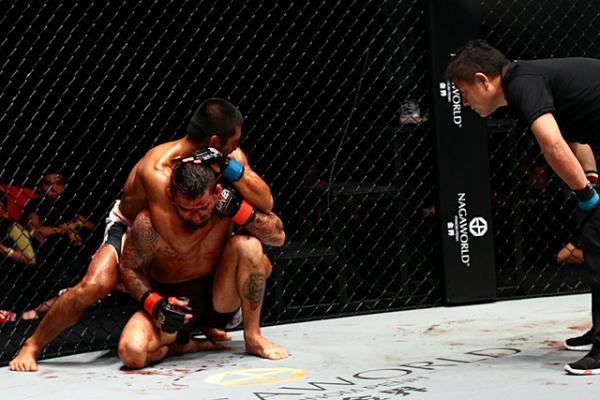 
TAIPEI, Taiwan -- Eric Kelly and Rob Lisita went head-to-head the One Fighting Championship 18 “War of Dragons” main event, as they engaged in a battle that left both fighters soaked in blood by the time the Filipino finished it with a second-round rear-naked choke on Friday at the NTU Arena.

The first round of their featherweight title eliminator provided some non-stop action for the fans in attendance at One FC’s first-ever event on Chinese soil. The bell rang and they met immediately in the center of the cage, trading punches and knees from the clinch. 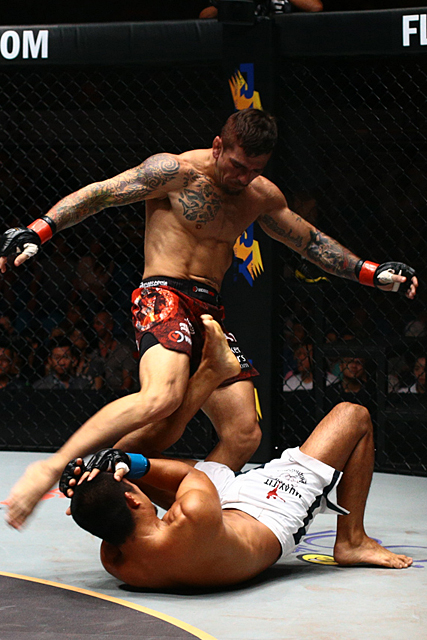 (+ Enlarge) | Photo Courtesy: One FC
Lisita was aggressive early on.
After a couple of scrambles, Kelly ended up on his back and Lisita landed two hard soccer kicks which were partially blocked. Lisita followed the Filipino to the ground and found himself in north-south position, looking for the choke. Kelly rolled out. Back on the feet, they traded punches again, with the Australian getting the better of the exchanges.

The action was frenetic and both fighters were probably grateful for a moment’s respite when the action was paused after a low blow to Lisita. As soon as the fight was restarted, the Australian landed a hard right to his opponent’s midsection and followed it with an immediate takedown.

There was still time for Lisita to attempt a leg lock, and Kelly, a Universal Reality Combat Championship titleholder, to come close with a rear-naked choke before the end of the round. The second stanza started in identical fashion, with the fighters going straight into the clinch before Lisita took the back of Kelly, who by this stage had blood pouring from his nose.

Kelly reversed, but referee Yuji Shimada called a timeout so the doctor could assess the damage to his nose. He then reset them in the original position, but Lisita escaped and worked his way up.

A stuffed takedown attempt from Kelly allowed Lisita to move into side control and transition to his back. Once again, the Filipino escaped and the roles were reversed, as he took the Australian’s back. This time, he found a finish, sinking a rear-naked choke that brought the tapout at 3:40 of round two. 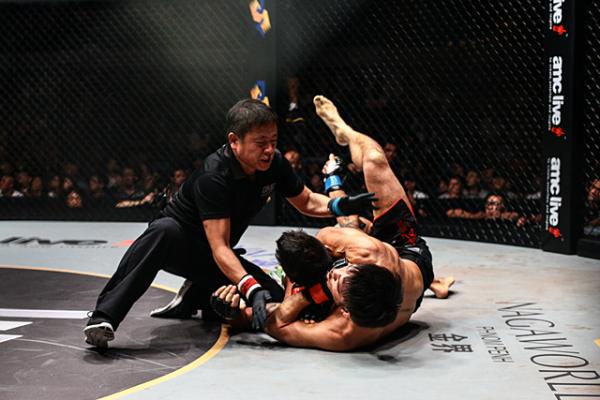 (+ Enlarge) | Photo Courtesy: One FC
Ando shocked Nunes with a quick catch.
After the fight, Kelly was taken to the hospital. Depending on how quickly he recovers, a shot at reigning One FC featherweight champion Koji Oishi could be in the cards in Dubai in August. He moves to 11-1 with a ninth career submission win, while Lisita drops to 14-6 and sees a four-fight winning streak snapped.

In the co main event, Rafael Nunes saw his perfect professional record ruined by Koji Ando. The undefeated Brazilian shot for an early takedown, but the incumbent Legend Fighting Championship lightweight titleholder brushed it off before taking his back and sinking a rear-naked choke. The tap came at 1:43. 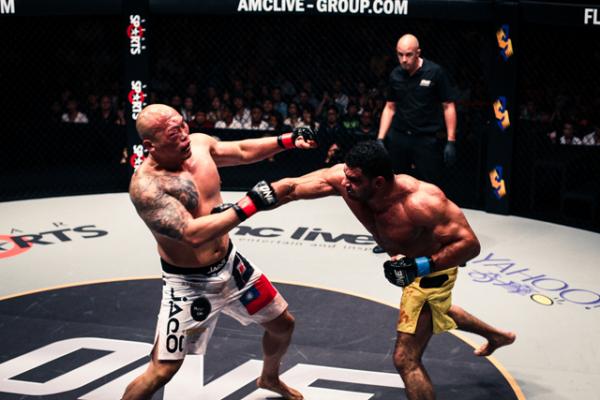 (+ Enlarge) | Photo Courtesy: One FC
Cheng and Hassan waged war for 10 min.
In a battle between bantamweight contenders, Koetsu Okazaki (10-3-1) came out on top, with Yusup Saadulaev (12-4-1-1) succumbing to a second-round barrage of ground-and-pound after the Japanese import took his back and flattened him out. Referee Oliver Coste stepped in to stop the fight at 4:32.

Paul Cheng’s fight with Mahmoud Hassan provided plenty of action, with the Taipei-born heavyweight dominating the opening round before getting dropped with a right hook early in the second.

Cheng (5-1) recovered and controlled the remainder of the round, with Hassan (1-4) deciding not to come out for the third. He cited a rib injury in handing his opponent a TKO win.

On the undercard, Jeff Huang (4-1) beat Bala Shetty (0-1) by punch-induced TKO at 3:20 of round one in a welterweight contest; in a clash of lightweights, Eliot Corley (2-2) beat Rayner Kinsiong (2-0), knocking him out with an elbow at 1:36 of round one; and Nathan Ng (1-0) caught Florian Garel (2-4) with a north-south choke submission at 1:23 of round one in their featherweight fight.