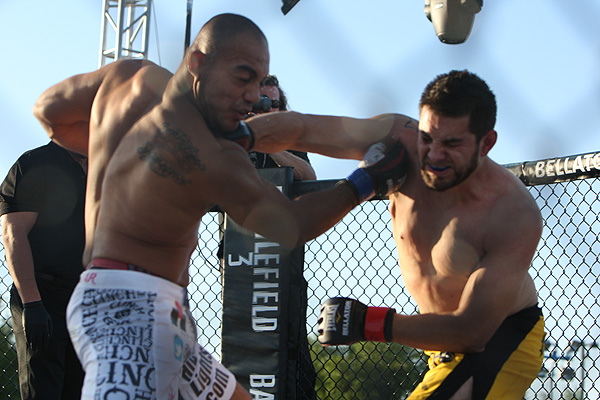 The size disadvantage proved to be utterly negligible, as Flores’ opening bum rush was easily avoided by Hale, who deftly strung together a pair of knees from the Thai plum and a short right hand as the coup de grace. Flores dropped to the mat unconscious, giving Hale the KO just 18 seconds into the fight. 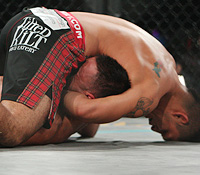 The two exchanged strikes early before Escudero shot in for a takedown, eventually dragging his opponent to the mat and working to advance his position. Avila looked to escape, but in doing so failed to protect his neck from Escudero, who latched onto a guillotine choke. He adjusted repeatedly until he ended up mounted on top of his foe with the submission firmly attached. Avila attempted to gut it out, eventually submitting at 1:55 of the first.

Jacob Ortiz seemed to be in over his head against UFC veteran Edgar Garcia, who stalked his opponent throughout the opening round and landed hard single strikes to the head, body and legs while shrugging off Ortiz’s return fire and takedown attempts.

His legs punished by thudding low kicks, Ortiz attempted to stay mobile and switched stances to mitigate the damage as Garcia seemed to play with his proverbial prey. However, Ortiz had one last gambit up his sleeve as he leaped in and uncorked a massive overhand right that caught his opponent on the tip of the chin, dropping him face first as Ortiz threw several more perfunctory punches for the brutal knockout victory at 4:06 of the opening stanza. 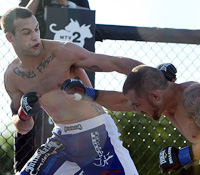 D. Mandel
Porter (right) bested Piedmont.
Alliance MMA’s Erin Beach fought off a pair of early submission attempts from Roscoe Jackson, but eventually found himself in top position and dropping heavy leather on his increasingly helpless lightweight opponent. A gradual move to side control, mount and eventually back control with a full body triangle portended the end for Jackson, as Beach locked in a rear-naked choke for the submission at 3:52 of round one.

At 170 pounds, Mesa, Ariz., resident Jade Porter put his undefeated record on the line in a welterweight bout against Tucson, Ariz.,’s Nick Piedmont.

Piedmont was able to control the opening stage, reversing Porter’s repeated clinch attempts and landing hard knees inside before scoring a late takedown and mount to seal the round in his favor.

Porter’s aggression became more measured in the second and appeared to pay dividends, as he began clipping Piedmont with overhand rights and knees to the body. With the bout appearing close to even entering the final frame, it was ultimately a hard knee from Porter that proved to be the night’s most significant strike. Judge Peter Rogers saw the bout 29-28 for Porter, while Luis Cobian and Cardo Urso scored the fight a 30-27 shutout for Porter.

In the evening’s opening bout, Steve Steinbeiss turned in a methodical performance against Dano Moore, searching for submissions early and often. A guillotine, triangle choke and omoplata all kept the muay Thai stylist on the defensive, eventually allowing Steinbeiss to take the back. When a front flip failed to extricate Moore from the precarious position, it was only a matter of time before Steinbeiss locked in the rear-naked choke in the bout’s final seconds, forcing a tap at 4:52 of round one.