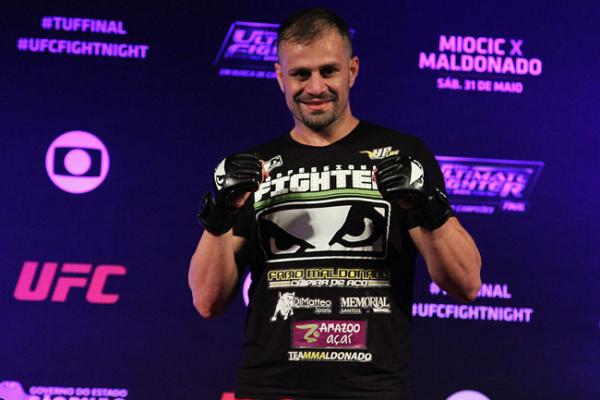 After a heavyweight appearance, Fabio Maldonado is back at 205 pounds. | Photo: Gleidson Venga/Sherdog.com


Fabio Maldonado will look to bounce back from his defeat against Stipe Miocic in May by taking on a streaking fighter in Hans Stringer at UFC 179.

Ultimate Fighting Championship officials confirmed the pairing on Thursday. The pay-per-view event takes place at the Maracanazinho Gymnasium in Rio de Janeiro on Oct. 25 and features a featherweight title rematch between Jose Aldo and Chad Mendes. The card is also expected to include a key light heavyweight showdown pitting Phil Davis against Glover Teixeira.

Maldonado will return to 205 pounds against Stringer, a weight class in which he has notched three consecutive decision victories against Roger Hollett, Joey Beltran and Gian Villante. “Caipira de Aco” stepped in for Junior dos Santos at UFC Fight Night “Miocic vs. Maldonado,” but was finished in 35 seconds in front of his hometown Sao Paulo crowd.

Stringer has not lost since 2010, winning five and drawing in two bouts, including his UFC debut against Francimar Barroso at UFC Fight Night “Shogun vs. Henderson 2.” The Blackzilians product has only been finished twice in his 30-fight career, and will be competing for the second consecutive time in Brazil.