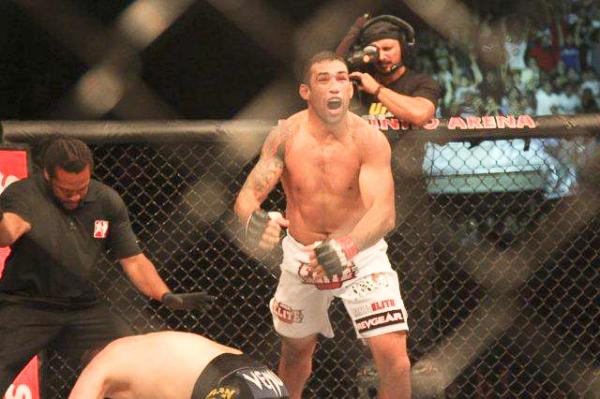 Fabricio Werdum wants a crack at the gold.

Following his first-round knockout of Mike Russow at UFC 147 on Saturday night, Werdum said he was ready to take on heavyweight champion Junior dos Santos -- should the UFC desire. However, if the promotion has other plans, “Vai Cavalo” has no problem fighting again before challenging for the title.

“For sure, I’m close [to a title shot] now. If the UFC asks, then I’m ready for sure,” Werdum told Fox Sports after his win, “but maybe [I will have] one more fight, maybe on the [Cain] Velasquez-dos Santos card. After that, if I win, maybe I will fight [the champion] in Brazil. I don’t know. I’m just here to fight.”

Dos Santos is the man who ended Werdum’s first UFC run in 2008. Then an Octagon debutant, “Cigano” sent Werdum packing with a devastating uppercut at UFC 90. Since the loss, Werdum has won five of six, returning to the UFC in February and blasting Roy Nelson with punches and knees en route to a unanimous decision win at UFC 143.

Russow fared even worse than “Big Country” on Saturday night, as the American found himself standing at the end of Werdum’s range in the bout’s opening minutes before catching a hard uppercut on the jaw. Russow collapsed to his knees and Werdum followed him down, dropping punches and hammerfists for a first-round stoppage.

“I was doing a lot for this fight for three months at Kings MMA,” said Werdum. “I’m very happy because it’s a big difference, fighting in Brazil. I haven’t fought in Brazil in, like, nine years. Just to hear [the fans] say my nickname [made] me very happy.”

Werdum used the overwhelming crowd support as extra motivation to earn his victory over Russow, who had never before been knocked out. Now, the former Brazilian jiu-jitsu world champion looks toward his next fight. Though his opponent and fight date are both currently unknown, Werdum says he will get back to his training regimen in short order and begin his preparation.