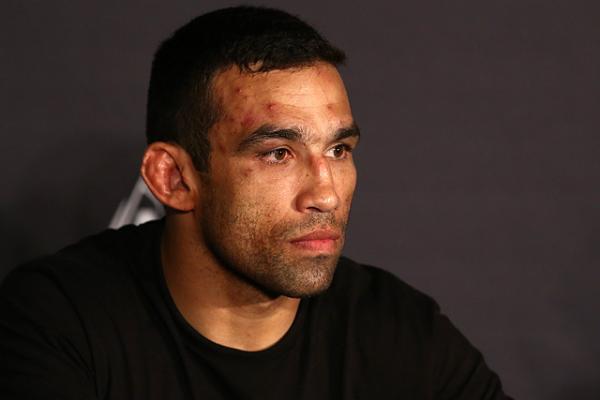 Fabricio Werdum is looking ahead to a major challenge this fall. | Dave Mandel/Sherdog.com


Heavyweight contender Fabricio Werdum extended his winning streak to four on Saturday with a one-sided decision against Travis Browne at UFC on Fox 11. While few could have predicted that jiu-jitsu ace Werdum would outwork the hard-hitting Hawaiian on the feet, Werdum told Sherdog.com on Monday that everything went according to his team’s plan.

“I knew conditioning was going to be a big part of it,” said Werdum. “That’s why I put so much emphasis on it with ‘Cobrinha’ [Rubens Charles Maciel], my jiu-jitsu and conditioning coach. Master Rafael [Cordeiro], as usual, led the MMA training and strategy. I’ve been training with him for seven years.

Maciel and Cordeiro were not the only ones to whom Werdum turned for input. Also among his game plan advisors were wrestling coach Kenny Johnson, brother Felipe Werdum, Renato “Babalu” Sobral, and even UFC roster-mates Lyoto Machida and Rafael dos Anjos.

“We saw that [Browne] always finishes his fights quickly and struggles with stamina when it goes the distance,” Werdum commented. “We noticed he was very heavy, about 247 pounds, and that’s worse as the fight goes on because you have to carry more weight.”

Werdum believes he could have knocked out Browne but favored a more conservative strategy in order to avoid the counterstriking of “Hapa.”

“I fought a smart fight, very strategic. A lot of people said I could have knocked him out, but we know how dangerous Travis Browne is. His hands are heavy, his kicks are heavy, so why take so much risk? I was taking risks, but not many, because I wanted to win. It was important. Imagine if I went with the flow at the end, charged at him, and the guy lands a big one on me? That’s heavyweight: one hit and it’s all over.”

With his win on Saturday, Werdum earned the right to challenge the only other UFC heavyweight riding a four-fight win streak, champion Cain Velasquez. The title bout is tentatively expected to take place in Mexico this November, but in Werdum’s mind, it’s already begun.

“I’ve been thinking about that fight for a long time. Now, it’s only a matter of beginning training. I’ll take a week off, then I’ll train like crazy because I know it’s going to be a tough fight,” Werdum said. “Travis was tough also, although it may not have looked like it, but it was. This one is going to be even tougher because it’s for the belt, and it’s going to be in Mexico at about 3,000 meters’ altitude. There’s a lot to think about: the altitude, the training, whether I need to go there early or train at some mountain nearby. We’ll have to figure something out for November. It’s not confirmed, but I think it’s going to be in November.”

Before they face off inside the cage, Werdum and Velasquez will likely coach opposing squads on a Latin American edition of “The Ultimate Fighter.” However, this season of the long-running reality show will come with a twist.

“It’s going to be a unique experience. I’ve been [on ‘TUF’] twice: once as Wanderlei Silva’s jiu-jitsu coach, and once as a head coach against ‘Minotauro’ [Antonio Rodrigo Nogueira]. Now, it’s going to be a lot different, since it’s not going to take place in a single country, but in almost every country in Latin America,” Werdum explained. “A lot of people will see, it will be nationally broadcast, so I can extend my work as the UFC’s ambassador in Latin America, showing everything about the fighters in the house: the effort, diet, suffering, fear, anxiety, everything. We will be able to show how a fighter lives and how he prepares for a big fight, so it’s huge to hit that market.

“I’m used to ‘TUF.’ It takes a lot of work -- 40 days, sometimes almost two months of shooting -- but I’m used to that as a commentator and I think that I’ll nail it. All I want to be able to do is my own training in the house. There will be some time between shooting and the fight, but I don’t want to stop training. I’ll have all my coaches with me -- Cobrinha, Rafael, my brother, Kenny Johnson -- so I guess it will turn out fine.”

Vinicius Giglio contributed to this report.