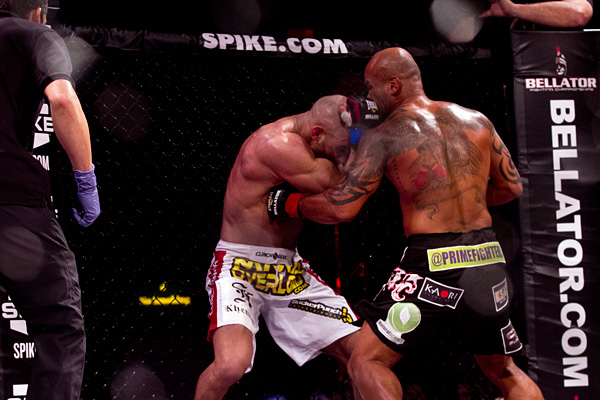 Falcao tore into the Frenchman with leg kicks, struck for trip takedowns and tagged him repeatedly with his powerful right hand, as he captured a unanimous verdict in the Bellator Fighting Championships Season 6 middleweight tournament quarterfinals at Bellator 61 on Friday at The Riverdome at Horseshow Casino and Hotel in Bossier City, La.

The two middleweights, both of which have ties to the UFC, shed a tentative start and let the punches and kicks fly. By round two, Falcao had established himself as the superior fighter. There, the 31-year-old slammed his shin into Paraisy’s lead leg over and over again and wobbled him with a searing right hand. Instead of finishing “The Ultimate Fighter” Season 11 alum when he had the chance, Falcao elected to toy with him, and Paraisy (10-2, 0-2 BFC) survived to see a third round.

Not much changed over the final five minutes. Falcao sprawled effectively, scored with a trip takedown and belted him with rights and lefts, coasting into the semifinals without much resistance. 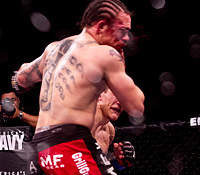 
Russian prospect Vyacheslav Vasilevsky put a savage beating on “The Ultimate Fighter” Season 11 alum Victor O’Donnell, as he cruised to a unanimous verdict in the Bellator Season 6 middleweight tournament quarterfinals. All three cageside judges scored it for Vasilevsky (16-1, 1-0 BFC) by matching 29-28 counts, as he extended his winning streak to 15 fights.

O’Donnell (11-4, 0-2 BFC) landed a pair of takedowns and a handful of leg kicks in the first round. That was the extent of his offense. Vasilevsky floored him with a short left hand inside the first minute of the second round, pounced on his wounded opponent and unleashed a wicked stream of ground-and-pound
that lasted the rest of the round.

The situation did not improve for O’Donnell in the third. There, Vasilevsky cracked him again, tagged him with more short punches from the top and throttled him with accurate power punches when the two middleweights returned to their feet. By the time it was over, O’Donnell’s left eye was nearly swollen shut, and he was bleeding from both nostrils. 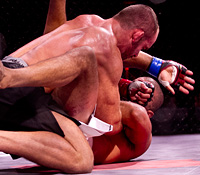 Santana (17-2, 1-1 BFC) was effective on the feet to start, but his strikes lost their sting once his foe’s assault on his legs took hold. The 40-year-old Team Oyama representative failed in his bid to get the brutish Santos to the ground and ate more kicks to his lower extremities as a result. After a competitive first 10 minutes, Santos turned up the heat in round three, where he landed a pair of takedowns, continued to pepper Santana’s legs and dodged a late kneebar attempt from “The Arm Collector.” 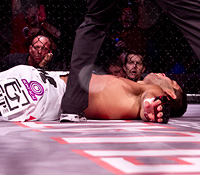 A. Hemingway
Rogers mauled Vianna.
Brian Rogers punched his ticket to the Season 6 middleweight tournament semifinals, as he knocked out two-time Brazilian jiu-jitsu world champion Vitor Vianna with a picture-perfect flying knee 4:14 into the first round. The devastating blow, which followed a clean right cross, left the Wand Fight Team representative unconscious in the center of the cage.

A winner in eight of last nine appearances, Rogers (9-3, 2-1 BFC) attacked Vianna with kicks to the legs and straight punches to the head. He stuffed the Brazilian’s attempts to get the fight to the ground and scored with a hip toss of his own, belting Vianna (12-3-1, 2-2 BFC) with a hammerfist before returning to an upright position. Back on the feet, Rogers wobbled his foe with a right hand and followed with the knee for the finish. 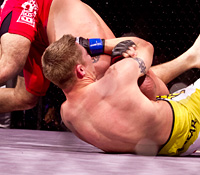 A. Hemingway
Krantz caught Scallan.
Derrick Krantz threw the brakes on a two-fight losing streak, as he submitted Eric Scallan with a first-round brabo choke in a preliminary welterweight duel. Scallan (10-4, 0-1 BFC) -- who trains with UFC featherweight contender Dustin Poirier -- asked out of the match 3:01 into round one.

Krantz (11-5, 1-0 BFC) sprawled beautifully, secured a takedown from the clinch and moved into side control. As Scallan attempted to scramble back to his feet, Krantz capitalized and snatched the choke for the finish. With that, Scallan’s three-fight winning streak was over. 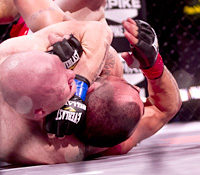 Sampson (9-1, 1-0 BFC) increased the intensity as each round went into the books. The 30-year-old set up a takedown with a stout two-punch combination in the third, landing in Myers’ guard. From there, Sampson transitioned to side control and clobbered his opponent with a knee to the face as he attempted to stand along the cage. He then moved to Myers’ back during a subsequent scramble and cinched the choke for the submission. 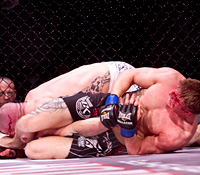 Andrew Hemingway
Houston tapped out Riggs.
Unbeaten middleweight prospect Trey Houston submitted “The Ultimate Fighter” Season 7 alum Jeremiah Riggs with a first-round armbar in a preliminary matchup at 185 pounds. Riggs (7-6, 1-1 BFC) conceded defeat 3:30 into round one, his career-best five-fight winning streak a thing of the past.

The two men pushed a furious pace, exchanging takedowns and punches. Clearly fatigued, Riggs delivered another takedown and attempted to secure a dominant position. Houston (9-0, 1-0 BFC) threw up his hips in response, locked in the armbar and forced the tapout. The Strikeforce veteran has five first-round finishes on his nine fight resume.


Beautiful combinations and a relentless volley of kicks to the head, legs and body pushed Josh Quayhagen past Brent Taylor, as he took a unanimous decision in their preliminary welterweight encounter. All three cageside judges scored it the same: 30-27 for Quayhagen (3-0, 2-0 BFC).

Quayhagen refused to allow Taylor (0-1, 0-1 BFC) a moment’s rest. When the 25-year-old Louisianan was not firing multi-punch combination to the head, he was attacking the rookie with kicks at various levels with both legs. Taylor, battered and bloodied, made a final bid for victory late in the third round, when he snatched a guillotine choke and strained for the finish. However, Quayhagen waited out the submission until the final horn sounded.