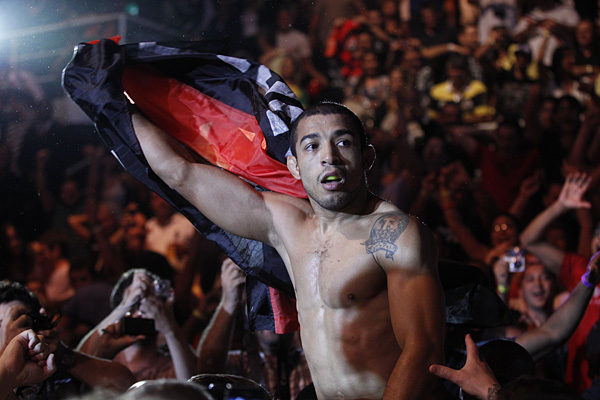 
Jose Aldo, this is your moment.

Aldo (21-1, 3-0 UFC) was utterly brilliant in the UFC 142 main event, as he retained his featherweight crown with a spectacular knockout victory over the previously unbeaten Chad Mendes on Saturday at the HSBC Arena in Rio de Janeiro, Brazil. Mendes (11-1, 2-1 UFC) met his end 4:59 into round one. Afterward, a triumphant Aldo stormed out of the cage and into the middle of a boisterous, pro-Brazilian crowd, where he was carried around on the shoulders of his countrymen in an emotional scene that will not soon be forgotten.

“This is why we do this,” Aldo said through a translator. “I can only thank my team. I’m nobody without my team.”

The finish was breathtaking. The two men engaged in an extended clinch against the cage, with Mendes attached to Aldo’s back. The Brazilian champion separated Mendes’ hands, broke free and, in one motion, turned and met the challenger with a knee to the head that was equal parts exquisite and devastating. The Team Alpha Male standout went stiff and hit the canvas. Aldo followed, blasted him with a right hand and put an exclamation point on his 14th consecutive victory.

“I knew he was going to go for my legs, and I knew I had to throw that knee,” Aldo said. “Thankfully, I put it on the right spot.”

From the start, it did not go well for Mendes. Aldo attacked with savage kicks to the legs and stymied every one of his takedown attempts. With the decorated amateur wrestler unable to put the fight in a more advantageous position, it was only a matter of time before Aldo zeroed in.

“Jose’s a great champion,” Mendes said. “He’s a tough dude. This is the best I’ve ever felt for a fight. I was very prepared, and he got me. He’s very athletic, very fast, with great footwork. He was the better man.”

A day after he failed to meet the contracted weight requirement for his middleweight debut, Anthony Johnson submitted to a first-round rear-naked choke from Vitor Belfort in the co-main event. The white flag was raised 4:49 into round one.

Backed by the echoing chants of his countrymen, Belfort (21-9, 10-5 UFC) had to walk through considerable fire to win for the seventh time in eight appearances. The 34-year-old succumbed to multiple takedowns and absorbed a brutal standing-to-ground right hand from Johnson (10-4, 7-4 UFC), who was 11 pounds overweight for the bout. Belfort kept his cool, let his hands work after multiple restarts by referee Dan Miragliotta, worked his way into a dominant position on the Imperial Athletics representative’s back and cinched the choke.

Belfort, who will next face Wanderlei Silva after a coaching stint on “The Ultimate Fighter: Brazil,” had not won via submission since finishing Bobby Southworth with a rear-naked choke under the Pride Fighting Championships banner nearly 11 years ago. 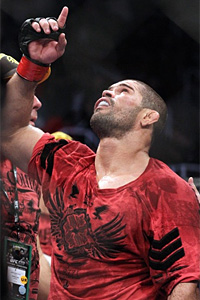 Rousimar "Toquinho" Palhares File Photo
Palhares won impressively.
Mike Massenzio spent barely more than a minute in the cage with Rousimar Palhares and, like several other before him, hobbled out of it.

Palhares victimized Massenzio (13-6, 2-4 UFC) with his trademark heel hook in their middleweight showcase, securing the tapout 63 seconds into the first round. It was the sixth such victory for the Brazilian powerhouse, who has become arguably the most feared leg lock specialist in all of mixed martial arts.

A legitimate threat to any middleweight on the planet, Palhares (14-3, 7-2 UFC) has won three fights in a row and six of his last seven.

Surging Brazilian welterweight Erick Silva had an apparent victory snatched away from him, as referee Mario Yamasaki disqualified the 27-year-old former Jungle Fight champion for illegal blows to the back of the head 29 seconds into the first round of his featured bout with Carlo Prater.

Replays did not appear to show any blatantly illegal blows.

“I have to decide right there and then,” Yamasaki said. “There is nothing I can do.”

Silva (13-2, 1-1 UFC) blasted Prater with a beautiful knee to the body in their initial exchange and drove him to the ground, swarming the WEC veteran with punches and hammerfists to the side of the head. One may have strayed from the intended mark but looked to be no worse than a glancing blow. Yamasaki intervened, and Silva walked back to his corner with what he thought was his fifth straight win. Moments later, after some considerable confusion, Prater (30-10-1, 1-0 UFC) left the cage as the victor.

“I have great respect for the referee,” Silva said through a translator. “I see most of [the punches] hit the side of the head. I don’t see any that hit the back of the head.”

Unbeaten Brazilian Edson Barboza recorded the first spinning wheel kick knockout in UFC history, as the former Ring of Combat champion flattened Englishman Terry Etim 2:02 into the third round of their lightweight showcase. It was a jaw-dropping conclusion, one certain to keep Barboza on highlight reels for years to come.

Barboza (10-0, 4-0 UFC) was in complete control at the time of the knockout, as he repeatedly landed the vicious low kicks for which he has become known. Etim (15-4, 6-4 UFC) had no answer for the speed and athleticism of his highly touted foe, and his situation grew more dire as the fight deepened. The kick brought an abrupt and brutal end to his outing, as Barboza’s heel struck him flush on the face and sent him crashing to the canvas, stiff as a board.