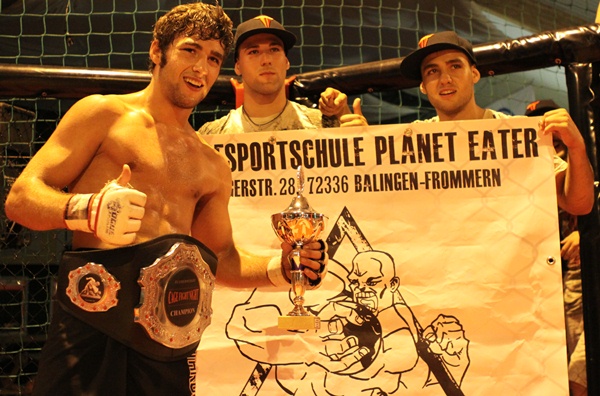 During midweek, the chances of the tournament even taking place looked uncertain after hometown boy Alex Becker went down with a torn ACL in training, and MMA Spirit representative Max Coga was unable to cut weight due to a struggle with the flu. Veteran promoter Bodo Elsbeck, who celebrated the 10th anniversary of his “Outsider Club“ with the Cage Fight Night 10 (his pro fighter event series) and Outsider Cup 24 (the newcomer portion of the show) combo event, secured two more-than-equal replacements on 48 hours’ notice in form of undefeated wrestler Marcel Jedidi and Dutchman Danny Peters.

After Nordin Asrih-trained muay Thai specialist Soufian Haj Haddou had made short work of Peters by way of first-round armbar, Buschkamp collided with Jedidi in the other semifinal. In one of the finest fights in German MMA so far this year, the BJJ specialist took the fight to the accomplished freestyle wrestler. Jedidi, accustomed to bullying his opponents around, never really got his rhythm going as Buschkamp took him down and transitioned from one position to the next at a breakneck pace. Eventually, the youngest of the three Buschkamp brothers took Jedidi’s back and sunk in a rear-naked choke at 3:04 of round one.

“I am so happy to finally win a title,” Buschkamp told Sherdog.com after his belt-clinching win. “I came in third at the Shooto European championships last year and took home the bronze at the European BJJ championships this year, that’s why it feels so good to stand on the top step of the winner’s podium this time.”

Even though his tournament representative came up short, Pride Gym head coach Nordin Asrih was the other major winner of the night. The “Ultimate Fighter 13” cast member steered his army of 17-, 18- and 19-year-old pupils to a whopping 13 victories out of a possible 15. Exemplary for this tremendous team effort were the wins of lightweight trio Mohamed Grabinski, Anthony Adotey and Rostislav Zatuchnyy.

Grabinski scored a unanimous decision over Team Topfighter representative Nick Verhoeven in the most brutal fight of the night. The Belgian fighter surprisingly got the better of the standup exchanges, but was taken down and beaten up repeatedly through all three rounds. Hammerfists from crucifix position and knees to the head from side control rattled the brain of the young Belgian, who hung tough for 15 minutes.

Eighteen-year-old former 170-pounder Anthony Adotey made a successful transition from welterweight to lightweight by sawing through Kuwaiti kickboxer Ahmad Dawood. Model athlete Adotey staggered his hapless opponent with a machine-gun barrage of punches, battering Dawood from back mount before sealing the deal with a rear-naked choke.

Rostislav Zatuchnyy was responsible for the upset of the night, as he viciously knocked out former ISKA and WFCA kickboxing champion Denis Oliwka with a crashing overhand right. The crowd held its breath when the 28-year-old Darmstadt native crumbled back to the canvas after being helped to his feet. Fortunately, the worst injury Olivka sustained from the knockout was a minor cut on the left cheekbone.

Finally, in the local main event of the night, hometown boy Maurice van Waeyenberghe rebounded from back-to-back first-round knockouts with a nice TKO of his own, overwhelming previously undefeated Dane Martin Dideriksen with a flurry of punches midway through the first round. After the fight, van Waeyenberghe took to the house microphone and announced that he would donate his purse to a children’s cancer fund, earning him a huge round of applause from the already enthusiastic crowd.