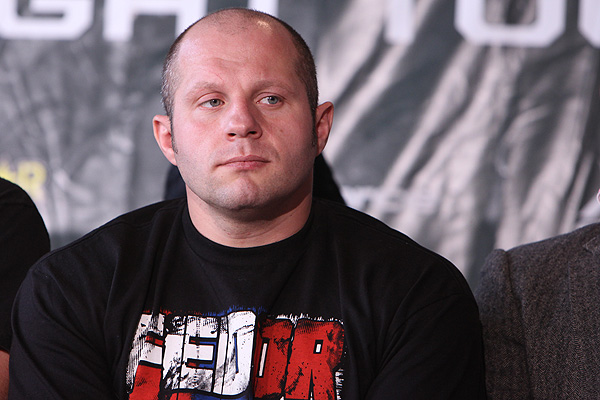 Fedor Emelianenko has not forgotten about MMA -- but he has no plans to return. | File photo: Dave Mandel/Sherdog.com


UNCASVILLE, Conn. -- It was one of those surreal weeks where anything seemed possible in the wild frontier known as Bellator MMA.

If one of the sport’s pound-for-pound legends could travel to frigid Connecticut to serve as an honorary ambassador at a local Dave and Busters, then who’s to say he wouldn’t be willing to one day don the four-ounce gloves again at the behest of an old associate? After all, he certainly wasn’t in town for the air hockey or the loaded tater tots.

Bellator President Scott Coker had already managed to pull off the improbable earlier that day, announcing that Kimbo Slice and Ken Shamrock will square off in St. Louis on June 20, nearly seven years removed from when they were originally supposed do battle. Back then, Slice was still an urban YouTube legend and “The World’s Most Dangerous Man” hadn’t yet seen his 50th birthday.

Although the fight might be well past its prime, Kimbo-Shamrock is still fun, the sort of spectacle MMA often lacks on its current week-to-week grind. And for all the jokes and feigned outrage, it was easily the trending topic on a Thursday afternoon. However, getting Fedor Emelianenko to sign on the dotted line would be a far greater coup.

A reinvigorated Shamrock was just a few steps away as Emelianenko signed autographs with assembly-line efficiency on Thursday night, but unless “The Last Emperor” had an epiphany amid the evening’s relentless arcade din, getting his signature on a Bellator contract appears to be a much more difficult endeavor.

“I won’t say that I miss it, but I enjoy watching all the fights. Just because of my retirement doesn’t mean I completely stopped,” Emelianenko told Sherdog.com through a translator earlier this week. “I’m in the ring training, trying to stay in shape, which is a big part of my life. Watching fights, it’s enjoyable.

I’ve had a long career; I’ve had a lot of fights; there’s been a lot of events. I feel like I can now relax a little bit.”

Before this week, Emelianenko had not been back to the United States since his final Strikeforce appearance, a first-round knockout loss to Dan Henderson on July 30, 2011. He fought three more times after that – twice in Russia, once in Japan – before riding off into the sunset. Coker, a few months into his tenure as Bellator boss, met with the former Pride Fighting Championships standout in Japan this past New Year’s Eve and convinced the stoic heavyweight to return to the States as an ambassador. That, at least, wasn’t a hard sell.

Only the truly naïve would believe that Bellator is content with simply having Emelianenko as a guest of honor. The red carpet was rolled out in hopes of eventually wooing the Russian legend back into active competition. Emelianenko had to be aware that his presence at a promotion-affiliated event would only serve to fuel speculation, but he is adept at deftly brushing aside most questions about a potential comeback.

He says that Cain Velasquez is his favorite fighter to watch, but he makes “no assumption” as to how he would fare in his prime against the reigning UFC heavyweight champion. He trains to stay in shape, but doesn’t do so with an eye toward a return. Enlightening the masses is his primary goal these days.

“Just because I’ve gone into retirement doesn’t mean I’ve completely forgotten [about MMA],” he said. “I’ve been training; I’ve been educating... I’m trying to get the word out and educate people about MMA.”

While he fondly recalls his Pride Fighting days, Emelianenko says he values the entirety of his professional career, including the heartbreaking defeats. In reflection, he doesn’t sound like a man yearning for the days of glory past.

One experience that Emelianenko devotees never got enjoy was seeing the Russian compete in the UFC. The two sides were reportedly close to a deal, but an agreement could not be reached. As a result, potential blockbuster bouts against Randy Couture and Brock Lesnar fell by the wayside.

“He got offered a [expletive] assload of money,” White said in June 2009. “A ton of money, everything he wanted. He can go fight in sambo every [expletive] Thursday night if he wants to. He can do everything he wanted to. We showed them nothing but respect.” Over the years, White consistently made it a point to minimize Emelianenko’s accomplishments in the sport, perhaps a product of the UFC president’s frustration with being unable to land his coveted target. Respect was never the foremost word that came to mind in that particular fighter-promoter relationship.

Entrenched in his current role of ambassador and educator, Emelianenko seems satisfied with the way things have turned out for him. There are no regrets about the past, and he doesn’t appear to have anything left to prove. He does, however, have one suggestion for the betterment of MMA as a whole.

“I would change Dana White for another promoter,” he said.

He then laughs heartily at the notion, a playful sentiment rooted in sincerity.