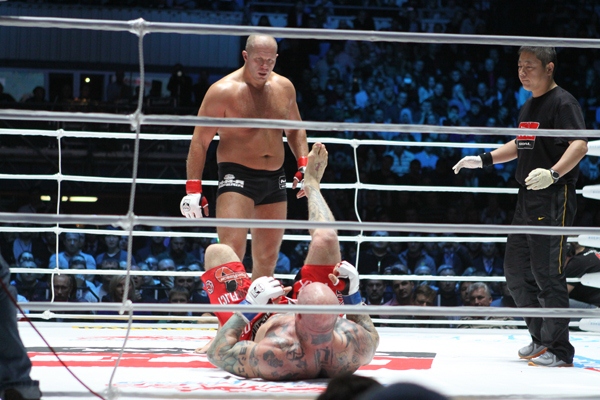 Fedor Emelianenko got back in the win column on Sunday. | Photo: T. Leidecker


MOSCOW -- Former No. 1 ranked heavyweight Fedor Emelianenko bounced back from three straight defeats with a solid but unspectacular performance that earned him a unanimous judges’ decision over two-time ADCC champion Jeff Monson at M-1 Global's “Fedor vs. Monson” on Sunday.

Emelianenko appeared to have regained some of the form that helped him rise to international superstardom in the Pride Fighting Championships when he knocked the American down with a big overhand right in the first round. However, the Russian refrained from following his battered opponent to the mat.

“Once I already did this thing when I went for the kill with Fabricio Werdum and I paid dearly for that, so this time I thought I better change my strategy,” a relaxed Emelianenko told Sherdog.com in the post-fight interview.

Even though Monson bled profusely in the later rounds from the punishment, Fedor stuck to his conservative game plan of alternating his trademark catapult-like right hand with stinging leg kicks, a strategy he developed with his striking coach Peter Teijsse while training in Holland prior to the fight. 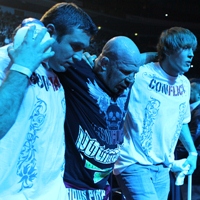 T. Leidecker
Monson was busted up after 15 minutes.
A capacity crowd of 22,000 people at Moscow's Olympic Stadium were thrilled by the homecoming of Russia’s most popular fighting export. Russian President Dmitry Medvedev and Prime Minister Vladimir Putin, a professed supporter of Emelianenko and 6th dan in judo himself, were ringside for the fight and took to the house microphone to congratulate their compatriot on his performance after the fight.

“Thanks very much to my fans in Russia,” Emelianenko said. “It was a great opportunity to perform here, and I’m also very grateful to Jeff [Monson] for taking the fight.”

In the co-main event, German lightweight Daniel Weichel took the promotion’s 155-pound title from Jose Figueroa of American Top Team. Just when the 6-foot-3 striker from Chicago appeared to have found his rhythm and began using his huge size and reach advantage to land nice combinations and kicks, Frankfurt’s Weichel closed the distance and knocked the American down and out. The end came at 1:50 of the opening frame.

On the undercard, a trio of French fighters had a particularly rough time. Jerome Bouisson found himself on the wrong end of a Yuri Ivlev power shot and crashed to the canvas early in round one. Referee Yuji Shimada jumped in before any more punishment was dealt and stopped the contest after one minute. The remarkable slide of two-time UFC veteran Xavier Foupa-Pokam also continued as he was submitted by late replacement Albert Duraev. “Professor X” started well, raining down punches from mount position in the first round, before being caught in a triangle and submitting at the 2:37 mark of round two.

Seydina Seck suffered a similar fate as Bouisson, as he was knocked unconscious by veteran Russian muay Thai stylist Mikhail Malyutin in 47 seconds. Also in action was versatile Russian welterweight Alexander Yakovlev. “Bad Boy” certainly had the best entrance of the night, walking in decked out in an original Russian chapka and to the tune of his own live rapper. His opponent, previously undefeated BJJ stylist “Juanma” Suarez from Spain, was simply overmatched and eventually succumbed via strikes at 3:55 of the second round.

The most impressive performance of the night came courtesy of Vienna, Austria-based Chechen lightweight Mairbek Taisumov. “Beckan” displayed a very tight standup game against Mobile, Ala.'s Joshua Thorpe, scoring with crisp jabs and hard body kicks. His takedown defense against the American’s wrestling-based attack was also immaculate. Ironically, it was a picture-perfect takedown and resulting ground and pound that ended the night for Thorpe at 3:19 of the second frame. Taisumov, however, should be next in line for a title shot after winning his sixth fight under the M-1 banner.