SAN JOSE, Calif. -- Fabricio Werdum turned the MMA world on its ear with his stunning upset off top-ranked heavyweight Fedor Emelianenko at Strikeforce/M-1 Global “Fedor vs. Werdum” on Saturday at the HP Pavilion.

“I feel very, very happy,” Werdum said. “I know my team is a strong team. I believed in this victory because of the hard training.”

In a fight that was deemed little more than a formality by many pundits and fans, it seemed like Emelianenko was well on his way to an expected victory after he deposited Werdum on his wallet with a right hand just moments into the bout.

However, the man who has ruled the heavyweight division for so long inexplicably followed the Brazilian jiu-jitsu specialist to the ground and soon found himself fending for his life, as Werdum transitioned through a series of submission attempts.

Emelianenko fought off an armbar but was quickly engulfed by Werdum’s legs in a triangle choke that began to squeeze the unbeatable aura from the former Pride champion. He fought to keep his wits, but it became clear he was in an inescapable position.

Werdum manipulated Emelianenko’s left arm away from his body and started to hyperextend his limb with a wrenching armbar that forced the legendary fighter to tapout for the first time in his MMA career. The end came just 69 seconds into the main event.

“The one who doesn’t fall doesn’t stand up,” Emelianenko said. “I was concentrating on the strikes. That’s why I made the mistake. We’ll try and figure out and analyze why it happened. We have one more fight, for which I will come to America.” 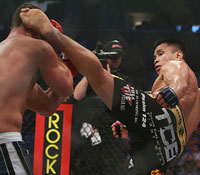 Dave Mandel/Sherdog.com
Le got his revenge.
Cung Le took a few minutes to get going, but once he found his comfort zone, his rematch against Scott Smith turned into a one-sided affair. The popular San Jose icon tentatively felt his way around the first half of the opening round before turning up the heat on the man who gave him his only loss in December.

“I came back. I knew I had to get in shape,” Le said. “I trained hard. I was focused. I ate really clean. I cut out pizza and chocolate for six, seven weeks.”

Smith shot out of his corner to begin the fight, much like Le’s trainer, Javier Mendes, predicted. Le had dominated nearly all of their first fight until he was hammered with a right hand that sent him reeling; his camp felt Smith would try to bypass the beating he absorbed this time.

It looked like a sound strategy. Le looked confused, as he rapidly circled away from Smith and seemed hesitant to engage. That all changed late in the first round when Le began to find his range with his jab. The first sign of his growing comfort was a one-two that wobbled Smith late in the round and sent him careening backwards into the cage. Le, sensing a possible finish, turned up the heat and repeatedly found his mark with his jab and follow-up left hands.

Smith tried to shoot, but Le sprawled and pounded him to the body as time expired on round one. It was clear the tide had turned.

Round two was all Le. The hometown favorite was pinpoint accurate with his strikes and had Smith flailing with single power shots and little more. In complete control, Le dialed up a highlight reel spinning back kick that dug into Smiths right side and crumpled him to the mat.

He followed up with knees to the body and punches to the head until referee Jason Herzog intervened at 1:46 of the second round.

“I fought smart and let him come in, and he came into the power,” Le said. “He came to fight. I came to fight. When the smoke cleared, I happened to be standing here.” 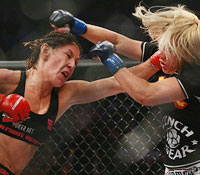 Dave Mandel/Sherdog.com
Cyborg pounded Finney.
Strikeforce women’s middleweight champion Cristiane “Cyborg” Santos repeatedly bashed Jan Finney with power punches and dropped her at least three times in the opening frame of their title bout, finishing her by technical knockout in the second round.

“My opponent was strong, but I trained hard,” Santos said. “I was ready for a war.”

The only positive moment for Finney came late in the opening stanza, when Cyborg landed a few wayward strikes to the back of her head from top position. Referee Kim Winslow stepped in and deducted a point, but the rout was back on after the restart. The champion landed so many overhand rights that it seemed she could not miss with the punch. Finney’s left eye was nearly closed and bleeding profusely from the unyielding assault.

The end finally and mercifully came midway through the second round, when Finney crumbled under the weight of another unending volley of Cyborg punches. Finney was rendered completely defensive after being dropped with a right hand and knee to the body. Winslow finally decided to halt the fight at 2:56 of the second round. 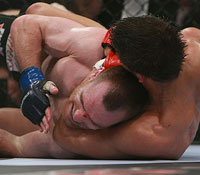 Dave Mandel/Sherdog.com
Thomson submitted Healy.
Josh Thomson got a little more than he bargained for from tough veteran Pat Healy in their lightweight bout. “The Punk” took everything Healy had to offer and answered with a slick submission win late in the third round.

Thomson got off to a quick start in the first, rattling off an impressive chain of submission attempts after a Healy takedown. The hometown fighter transitioned from armbar to triangle choke and back to armbar, as he had Healy scrambling.

The Oregon-based Healy remained patient and defended himself well. His patience nearly paid off when he ended up in back control after escaping Thomson’s clutches. However, Healy could not take advantage of the dominant position, and Thomson banked the first round.

Healy rebounded well in the second and controlled the entire frame with his wrestling. He remained in dominant position throughout the round. His only hiccup came on another armbar attempt from Thomson that he easily shrugged off.

With the fight even heading into the third frame, it was Healy who looked to be taking control over his heavily favored opponent. He scored another takedown early in the period and looked to be on his way to the upset. Thomson, to his credit, worked his way clear and back to his feet but was taken back down with a little more than two minutes left.

Thomson looked to be slowing considerably, but when Healy fortuitously slid off his back trying to improve his position, he took advantage of the break. He moved to Healy’s back and latched onto a body triangle and finessed a rear naked-choke until Healy was forced to tapout at 4:27 of the final round.