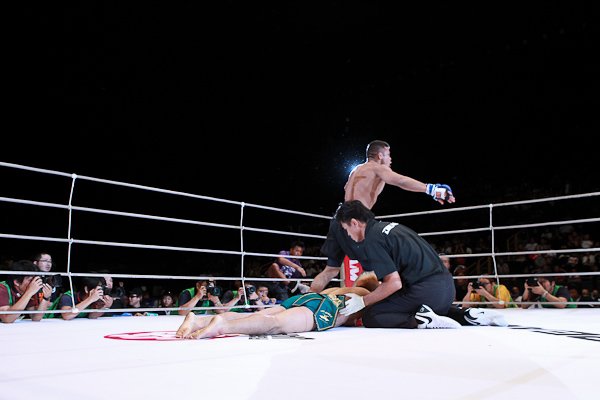 
SAITAMA, Japan -- If there were doubts about who the favorite in Dream's bantamweight grand prix might be, Bibiano Fernandes was quick to make a statement on Saturday -- 41 seconds quick.

“I didn't care how long the fight was. I just fought as needed, and, when Otsuka made a mistake, I took advantage of it. He overreached, and that was his mistake. That's the story of the bout,” said the Brazilian. 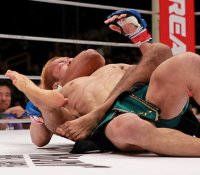 T. Irei
‘The Flash’ choked Otsuka with ease.
Otsuka scored the first punches on the Brazilian jiu-jitsu specialist, but it was all for naught as Fernandes quickly took Otsuka's back. Equally fast was his application of the choke, which, once applied, saw Otsuka go flat on his belly. Referee Kenichi Serizawa moved in to test Otsuka for consciousness, picking up his hand twice and twice seeing it flop to the canvas, prompting him to pull Fernandes off the young Japanese upstart just 41 seconds into the bout.

“It was a complete loss. I have no excuse. It's all on me. I really wanted to go for it and attack him, but it obviously didn't work out the way I wanted to. Fernandes got his one chance and took it,” Otsuka lamented.

It was the first action of the year for the 31-year-old Fernandes, who had not fought since New Year's Eve, when he lost the Dream featherweight title to Hiroyuki Takaya. With his second career win over Otsuka -- a man he also bested in Dream's 2009 featherweight grand prix -- Fernandes recorded his fourth submission in nine career wins.

The first round saw the American warily stalking Tokoro from the center of the ring, throwing single punches and low kicks as the Japan grand prix winner circled and countered with singles of his own. So conservative were both fighters that referee Yuji Shimada warned both men to step up the action at the four-minute mark of the initial frame, but neither committed to an all-out attack until later. 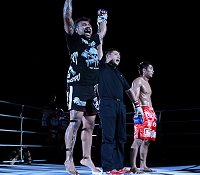 T. Irei
Banuelos won his post-Zuffa debut.
“I was a little bit gun-shy in the first round since I hadn't fought since February. So I had a little bit of ring rust, but once I settled in and got going, I felt comfortable after that,” said Banuelos.

The San Luis Obispo, Calif., native banked on big winging hooks, while Tokoro threw punch combinations followed by high kicks, one of which grazed the back of the American's head toward the end of the round and seemed to wobble him. However, Banuelos was not as hurt as he appeared, closing out the round by stealing Tokoro's back when he scrambled to finish.

In the final period, it was Baneulos slamming the Japanese fighter to the canvas to land knees to the body and posterior before the bell. For his aggression and effort to finish, Banuelos took the bout on the cards of judges Matt Hume and Hikaru Adachi; meanwhile, judge Akira Shoji favored Tokoro's conservative counter game.

“His hands surprised me a lot. I didn't think he was [going to catch me]. I thought I was going to be a lot better at striking than he was, but he was tough on his feet and caught me with a few things,” said Banuelos.

Japan bantamweight grand prix finalist Masakazu Imanari advanced to the next round of the bracket, putting away former King of the Cage champion Abel Cullum early in the third with a dominant display of grappling, earning his 15th tapout in 24 career wins. 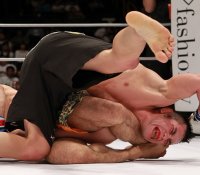 T. Irei
Imanari notched another submission.
It was business as usual for the “Ashikan Judan,” who baited his opponent to close the distance before dropping to the canvas in hopes of dragging the 2009 featherweight grand prix participant into his usual launchpad for submissions: inside the guard.

From his back, the 35-year-old Imanari threw up armbars and triangle attempts early, setting both the tone and pace for his American foe. Cullum, for his part, did what came instinctively to him by staying firmly in Imanari's guard to drop short punches.

Heavily worn down from being on the defense, Cullum was more than ripe for a finish in the third. Upon catching an Imanari kick, Cullum was quickly sucked into an armbar attempt and forced to tap just 46 seconds into the final round.

The 24-year-old Cullum falls to 18-6 with the loss, dropping three straight for the first time in his young career.

Getting the tourney started, once-beaten Brazilian Rodolfo Marques Diniz took a positional decision over Yusup Saadulaev in a fight that took pace largely on the canvas. 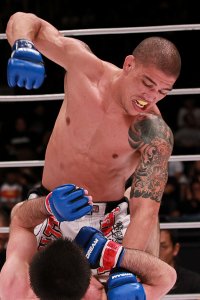 T. Irei
Marques thumped Saadulaev.
As the Nova Uniao product proved to have the edge on the feet over his Dagestani opponent, Saadulaev naturally shot for takedowns upon eating the Brazilian's more punishing blows. Though often successful getting it down, Saadulaev found himself in another kind of trouble as Marques proved more than proficient on the floor as well, forcing him to fend off leg locks and reversals.

“I watched a lot of videos and did my research and knew that he was really good on the ground. If I went down to the ground, I knew it'd be hard to apply my technique, so that's a lesson I learned,” said Marques.

With Marques threatening both on the feet and on the ground, judges Hikaru Adachi, Gen Isono and Akira Shoji had little choice but to side with Marques by unanimous decision.

There is currently no set date for the bantamweight Final Four to square off. However, it is likely that the championship final of the tournament and potentially the semifinals might take place on New Year's Eve, a sentiment earlier offered by Dream Event Producer Keiichi Sasahara.