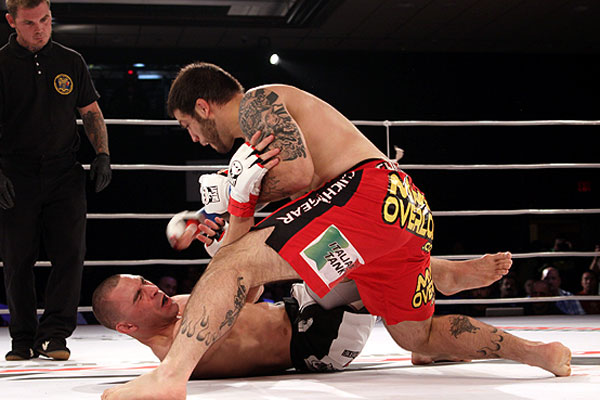 
ATLANTIC CITY, N.J. -- UFC veteran Luigi Fioravanti earned a much-needed victory, as he stopped Woody Weatherby on punches 2:51 into the first round at M-1 Selection 2010 “The Americas Finals” on Saturday at Bally’s Casino Hotel.

The victory snapped a two-fight losing streak for Fioravanti. The American Top Team representative looked strong early, as he secured a takedown and went to work with effective ground-and-pound. Once Weatherby returned to his feet, Fioravanti greeted the World Championship Fighting veteran with a barrage of strikes that left him on one knee. Fioravanti swarmed for the finish and forced the referee to halt the match less than three minutes after it began.

The first round was all Marunde, as he used his wrestling to put Primm on his back for a majority of the period. He transitioned from side control to the North-South position, but Primm avoided danger. The second round provided fireworks on the feet, as the two men rattled each other with punches. Ultimately, Marunde took advantage of the exchanges, as he landed several leg kicks. Primm tried two takedowns, only to be turned away.

Sensing he was down two rounds to none on the scorecards, Primm stalked his foe in desperation in the third and landed a knee that cut Marunde and forced him to take the fight to the ground. There, Primm worked an attempted guillotine that was quickly thwarted. Eventually, the two men returned to standing positions, as Marunde attacked Primm’s legs to noticeable effect. Visibly hurt, Primm tried for another sloppy takedown, but Marunde dodged his advances and cruised to the decision.

In the M-1 Selection 2010 light heavyweight tournament final, the unbeaten Byron Byrd submitted Daniel Vizcaya with a triangle choke 2:43 into the first round. Vizcaya entered the matchup with an unblemished record and took his opponent to the ground, where he met with the choke.

Elsewhere, Sportfight veteran Tyson Jeffries captured the middleweight tournament crown, as he submitted Mike Geurin with a triangle choke 3:43 into round three. Geurin secured three takedowns in the final round, but Jeffries remained active on his back. He locked in an armbar and transitioned to the choke, forcing Geurin to submit.

Other tournament winners included heavyweight Kenny Garner, who stopped Patrick Bennett on punches 2:31 into round one; lightweight Jose Figueroa, who landed a pair of low blows before striking George Sheppard into submission 34 seconds into the second round; and welterweight Tom Gallicchio, who coaxed a tapout from Len Bentley with a rear-naked choke 4:38 into the opening round.

All five tournament winners will compete against international competitors when M-1 Global returns to New Jersey on Dec. 11.