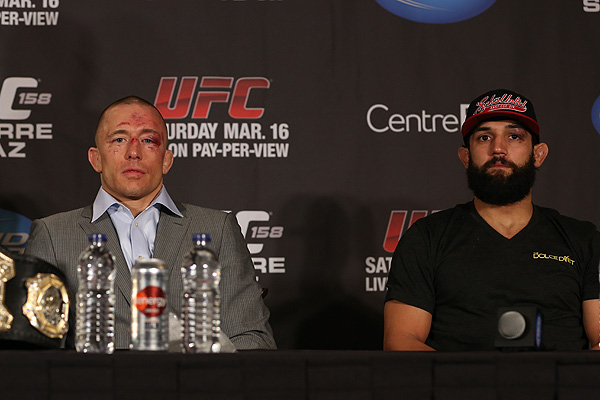 Georges St. Pierre could fight Johny Hendricks next, but Anderson Silva is also a possibility, according to trainer Firas Zahabi.

“That’s something that after he comes back from vacation we’re going to have to sit down and talk about, Georges and me and his management,” Zahabi told the Sherdog Radio Network’s “Cheap Seats” show on Tuesday. “It’s not a one-sided decision. The UFC is going to have to obviously tell us what they want to do. I think Georges would do either fight, to be honest with you.”

Both bouts intrigue Zahabi, though he does think a welterweight title defense against Hendricks would have to precede a bout against Silva if it’s going to happen.

“If he fights Hendricks, I think [St. Pierre] could fight for longer,” Zahabi said. “He could have more fights after that. If he fights Anderson Silva, I could really see that being his last fight. He’ll retire after that because there won’t be a bigger fight for him to do, I think, anymore in his career. … Win or lose, I think he’ll probably end on that note, on Anderson Silva. Maybe that’s why it’s been pushed back a little bit, but I think when it does happen, it’ll be the last one because once he goes up a weight class, he’s never coming back down.”